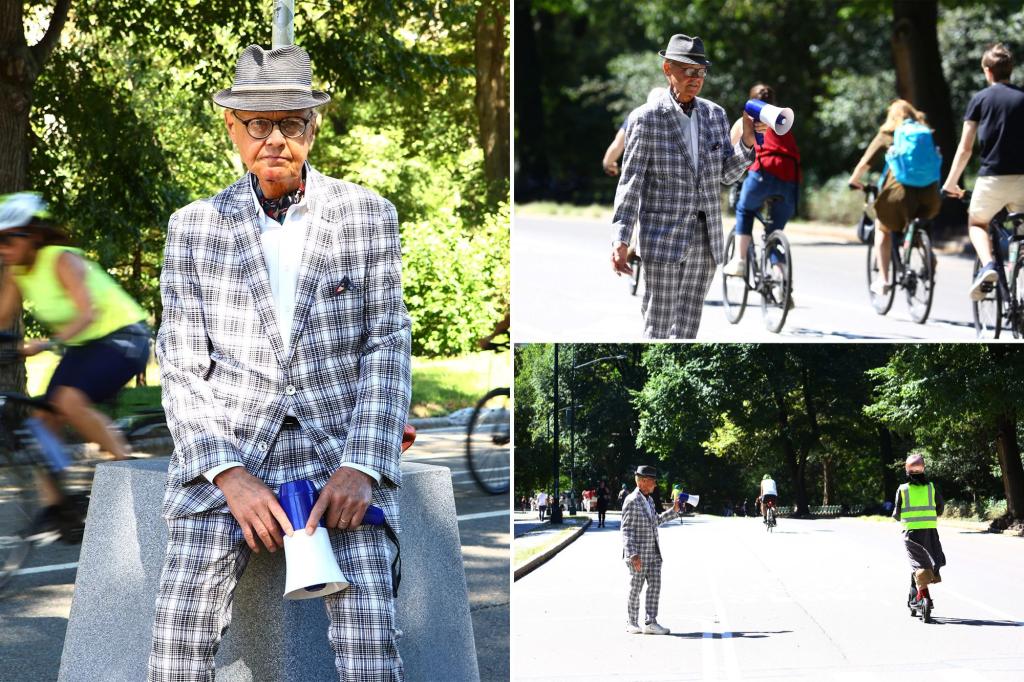 Jerome Dewald, 71, has devoted several hours every day since May trolling speeding, red-light-blowing cyclists at a deadly park intersection — using a radar device to track their speed and a bullhorn to try to shame them into slowing down.

“If you’re in the crosswalk and these Tour de France guys come flying through, they can call you an a–hole, but by the time you say it back, they’re already 40 feet down the road. The bullhorn solves that problem,” the Manhattan man told The Post while recently stationed at the crosswalk on West Drive near West 63rd Street.

“I’ve had a few guys assault me. One guy threw a bottle at me. One guy slapped the horn out of my hand,” he said.

The crosswalk has a stop light and pedestrian signals, which cyclists must obey by law.

Dewald’s shtick went viral over the summer. A video of him blasting cyclists who blow through the red light earned more than 32,000 “likes” on the “What is New York?” Instagram page.

In 2014, Connecticut mom Jill Tarlov died from injuries after a crash with a cyclist who had clocked a top speed of 35.6 mph in the park hours before the collision at the intersection.

Her family later described the situation at the crosswalk as a “time bomb.”

Dewald, a self-styled entrepreneur and activist with a checkered past, said things have only gotten worse.

“We are really skating on thin ice if we don’t do something about controlling traffic in the intersection. Kids are going to get hurt, if not killed,” he said, citing a nearby YMCA and Fieldston School.

Dewald’s one-man campaign is backed by a Change.org petition with more than 1,200 signatures. He said he spends an hour each weekday and three hours on weekends at the location videoing cyclists, tracking their speed with a Doppler radar device and telling them off with the bullhorn.

His messaging started out gentler, with recordings of “Stop in the Name of Love” and Aretha Franklin’s “Respect” that he played through his bullhorn. When he realized the message wasn’t getting across, Dewald swapped in a clip of Kevin Kline saying “a–hole” in the movie “A Fish Called Wanda.”

“It is not uncommon for the Tour de France guys, the guys with the $3,000 bikes and the $500 plastic pants, to come flying through here at a speed of between 28 and 33 miles an hour when people are in the crosswalk, even when the light is red,” he said. “And they yell at you, too.”

Among the irate advocate’s demands are better enforcement, a barrier between bike lanes and jogger lanes, rumble strips for bikes, an elevated crosswalk, better signs to prevent wrong-way cyclists, stop signs and signs to inform cyclists of kids crossing.

Dewald’s action-packed past includes running a PAC to fund marijuana legalization in New York City that came under scrutiny, and a 2005 conviction in Michigan on fraud and larceny charges tied to two political action committees — one for Al Gore and one for George W. Bush — in the 2000 presidential election.

Tarlov’s widow, Mike Wittman, declined to comment, saying he has not spoken with Dewald and doesn’t wish to have his family relive the episode of his wife’s death.

A spokeswoman for the city Department of Transportation, Mona Bruno, told The Post, “DOT values crosswalk safety and accessibility in Central Park.

“That’s why we’ve worked over years with the Parks Department to improve roadway management and make crossing easier. Our recent installation of accessible pedestrian signals at this intersection helps us meet our ambitious target of having 10,000 intersections equipped with APS by the end of 2031, she said, referring to the system of pedestrian signals that talk and vibrate.

‘I will f–king come for you’: NYC TLC boss goes off the rails in virtual meeting

nypost.com - 9 months ago
Taxi and Limousine Commission boss Aloysee Heredia Jarmoszuk told former employees "I will f--king come for you" and even predicted the caught-on-camera incident would "be on The New York Post in the morning."
Read More

Elephants have evolved to be tuskless due to poaching: study

nypost.com - 1 year ago
New findings suggest that, as a result of widespread poaching, elephants have evolved to not have tusks.
Read More

nypost.com - 2 years ago
The vast majority of Americans support the feds pausing the Johnson & Johnson vaccine in response to reports of serious blood clots among a handful of recipients, according to a new poll. Around 91 percent were aware that federal officials recently called
Read More

nypost.com - 2 years ago
Ghislaine Maxwell’s lawyers are trying to get their hands on a pair of cowboy boots that Jeffrey Epstein once bought a teen — and the original photo of Virginia Giuffre with Prince Andrew, new court documents show. Maxwell, 59, is charged in Manhattan
Read More
More News & Articles