The Madman believes Khalil Herbert is the better player, and if used in a feature role, can be as or more productive than David Montgomery.
Author: Drew Loftis
Published: 2022-09-27 09:00 am 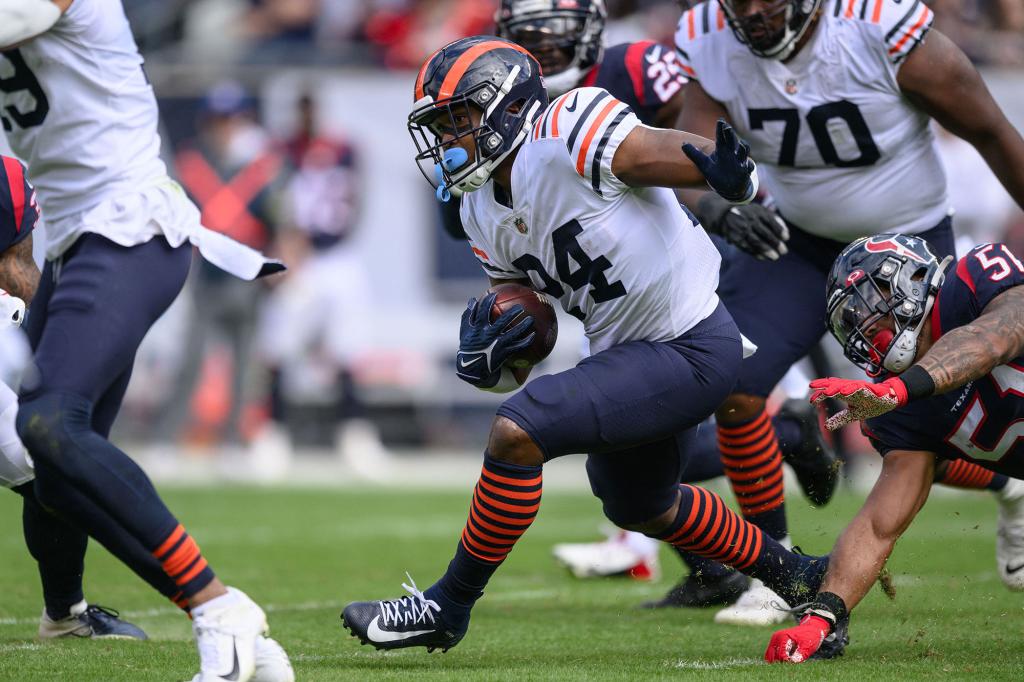 Let’s say you have a pair of familiar, comfortable bowling shoes. For some time you have requested the same pair on every visit to the alley. They feel fine on your feet with minimal slipping. There is no need to search for a new pair of regular rentals.

But then one day your preferred pair is not available. Someone else beat you to them, or the laces broke, or they were dirty, or whatever. They aren’t available, so you have to rent a different pair. They feel sort of similar, look sort of the same, but they’re … different.

Then you strut up to the lane with bowling ball in hand decked out in your newer kicks, and you roll a strike. Then another, then another. The shoes start to feel better and better, as does your confidence wearing them.

That scenario is exactly what the Bears are facing in their backfield right now. Old shoe David Montgomery went down with what was initially described as an ankle/knee injury. Coach Matt Eberflus referred to the injury as “day-to-day” immediately after the game.

Just reading tea leaves, Montgomery had to be helped off the field, he was quickly deemed “doubtful” to return (more often, even with sometimes serious injuries, players are deemed “questionable”), and — this is important — Khalil Herbert played great in Montgomery’s absence.

How great? Herbert’s career-high 157 yards rushing is more than Montgomery has ever posted in a single game, despite Montgomery playing more than twice as many games (47 to 20) and starting almost 20 times as many (38 to Herbert’s 2).

Herbert also tallied two touchdowns, which is the first time he has done so. But it is also just the fifth time Herbert has either started or gotten at least 14 touches. Of Montgomery’s 47 career games, he has reached that criteria in all but one. Granted, it is a small sample size, but based on those averages, Herbert is nearly twice as likely to score twice (20 percent) than Montgomery (10.9 percent).

The Herbert advantages don’t end there. He has reached at least 100 yards rushing twice in those five games (40 percent) that qualify under our criteria. Montgomery has done so eight times in 46 games (17.4 percent). Last season, Herbert averaged a broken tackle every 11.4 carries, and it took Montgomery 14.1 to do the same. Herbert also has a career yards-per-carry average nearly a full yard better than Montgomery (4.95 to 3.96).

Essentially, the Madman believes Herbert is the better player, and if used in a feature role, can be as or more productive than Montgomery. So we’ll hedge our transactions this week to reflect that.

Barring any news otherwise, we’ll lean into the possibility that Montgomery misses some time — at least a week or two. And we’ll bid high to grab Herbert, thinking there is a possibility he hangs onto the job, to some degree, even upon Montgomery’s return.

We like this new Herbert shoe. And we’re going to bid high so we can keep rolling strikes with him in our lineups.

nypost.com - 1 year ago
Julius Batties, the father of little Julissia Batties, won the right to claim the remains of his "princess" from the city morgue, where she has been kept since her tragic death.
Read More

The 2022 NFL Draft prospects for Giants, Jets to watch in Oregon-Washington

nypost.com - 1 year ago
Oregon-Washington is a game Giants and Jets fans will want to keep an eye on.
Read More

nypost.com - 8 months ago
With the worst-case scenario averted, the Knicks expected RJ Barrett to be full throttle in about a month for offseason workouts.
Read More
More News & Articles