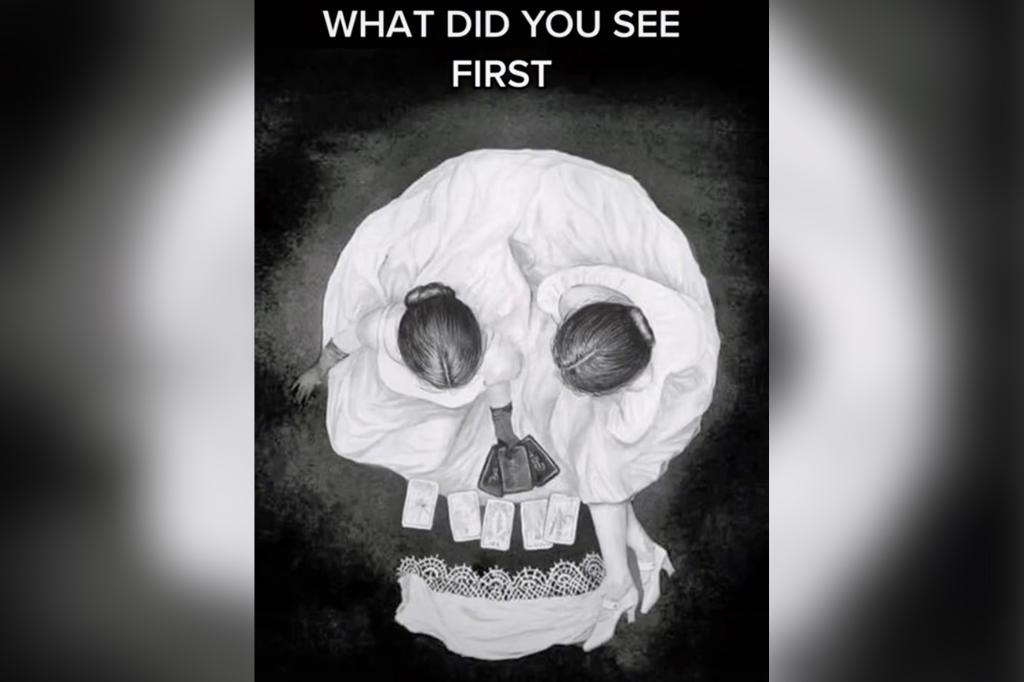 This latest black and white optical illusion will help reveal if you have a super competitive personality or if you’re a brutally honest person.

Initially shared on TikTok by Charles Meriot — a self-styled optical illusion influencer — the video has since gained nearly 84,000 views.

Meriot’s video stunned several users, with many viewers agreeing with their results regarding their personality type.

The optical illusion initially appeared on the cover of “The Ghost Sequences” by A.C. Wise, published in August of 2021.

“If you saw the girls playing cards it means that you’re cheerful and optimistic,” said Charles, but added, “You’re very competitive and you like to win at everything.”

However, if you see a skull it means something completely different.

“If you saw the skull first it means you’re trustworthy and honest,” explained Meriot.

“Your friends can always count on you, but sometimes you tell them things that they don’t want to hear,” he continued

“I saw the skull maybe that’s why I have no friends cause I’m a straight up honest person,” lamented one user.

“I didn’t even see the girls playing cards,” said another.

One even admitted that they couldn’t see either skull or girls.

“I saw a tapeworm f–king a lightning bolt,” they said.

nypost.com - 3 months ago
Columbia University dropped to No. 18 on the new US News Best Colleges list -- after admitting it had previously incorrectly reported some data used in the publication's popular ranking.
Read More

nypost.com - 8 months ago
The wildest NFL transaction season in memory has everyone wondering if this is the start of things to come.
Read More

Heat will be turned up on favorite Epicenter in Preakess Stakes

nypost.com - 6 months ago
BALTIMORE — Epicenter lost the Kentucky Derby because of a hot pace. Now he will face hot temperatures in the Preakness. Two weeks after getting passed by 80-1 long shot Rich Strike just before the finish line at the Derby, Epicenter goes into Saturday’s
Read More

nypost.com - 11 months ago
The Nets, received roster reinforcements, got big efforts from Kevin Durant and James Harden, but could not overcome some sloppy play in a 110-102 loss to the 76ers.
Read More
More News & Articles