Russian authorities are opening more military enlistment offices near Russia’s borders in an apparent effort to intercept men of fighting age who are trying to avoid getting called up to fight in Ukraine
Author:
Published: 2022-09-29 01:44 pm 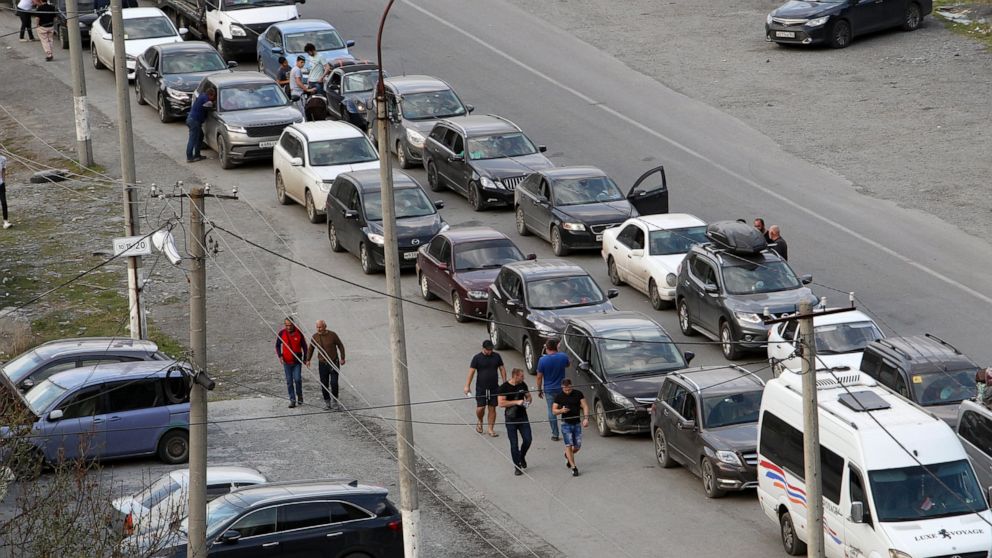 Russian authorities are opening more military enlistment offices near Russia's borders in an apparent effort to intercept some of the men of fighting age who are trying to leave the country by land to avoid getting called up to fight in Ukraine.

Earlier this week, makeshift draft offices were set up near the Verkhny Lars border crossing into Georgia in southern Russia and near the Torfyanka checkpoint on Russia's border with Finland. Russian officials said they would hand call-up notices to all eligible men who were trying to leave the country.

Over 194,000 Russian nationals have fled to neighboring Georgia, Kazakhstan and Finland — most often by car, bicycle or on foot — since President Vladimir Putin last week announced a partial mobilization of reservists. In Russia, the vast majority of men under age 65 are registered as reservists.

The Kremlin has said it plans to call-up some 300,000 people, but Russian media reported that the number could be as high as 1.2 million, a claim Russian officials have denied.

Russia's Defense Ministry has promised to only draft those who have combat or service experience, but according to multiple media reports and accounts of human rights advocates, men who don't fit the criteria are also being rounded up.

The official decree on mobilization, signed by Putin last week, is concise and vague, fueling fears of a broader draft.

The mass exodus of men — alone or with their families or friends — began Sept. 21, shortly after Putin’s address to the nation, and continued all this week. Airline tickets to destinations abroad have sold out days in advance, even at unprecedentedly high prices.

Long lines of cars formed on roads leading to Russia's borders. Russian authorities tried to stem the outflow by turning back some men at the borders, citing mobilization laws, or setting up draft offices at border checkpoints.

The bus stations in Samara and Tolyatti, two large cities in the Samara region, on Thursday halted service to Uralsk, a border city in Kazakhstan.

Finland announced that it would ban Russian citizens with tourist visas from entering the country starting Friday. With the exception of Norway, which has only one border crossing with Russia, Finland has provided the last easily accessible land route to Europe for Russian holders of Schengen zone visas. The Nordic country has taken in tens of thousands of people fleeing the military call-up in recent days.

abcnews.go.com - 1 year ago
The European Union's top official says the recent ruling from Poland’s constitutional court challenging the supremacy of EU laws is a threat to the bloc’s foundations
Read More

abcnews.go.com - 8 months ago
Power outages from severe weather have doubled over the past two decades across the U.S. as a warming climate stirs more destructive storms
Read More

McConnell announces opposition to bill that would create Jan. 6 commission

abcnews.go.com - 2 years ago
Republican Leader Mitch McConnell announced Wednesday morning that he intends to oppose a bill that would create a commission to examine the events of Jan. 6.
Read More

Paul Newman memoir left unpublished to come out next year

abcnews.go.com - 1 year ago
A memoir Paul Newman left unpublished in his lifetime will come out next fall
Read More
More News & Articles