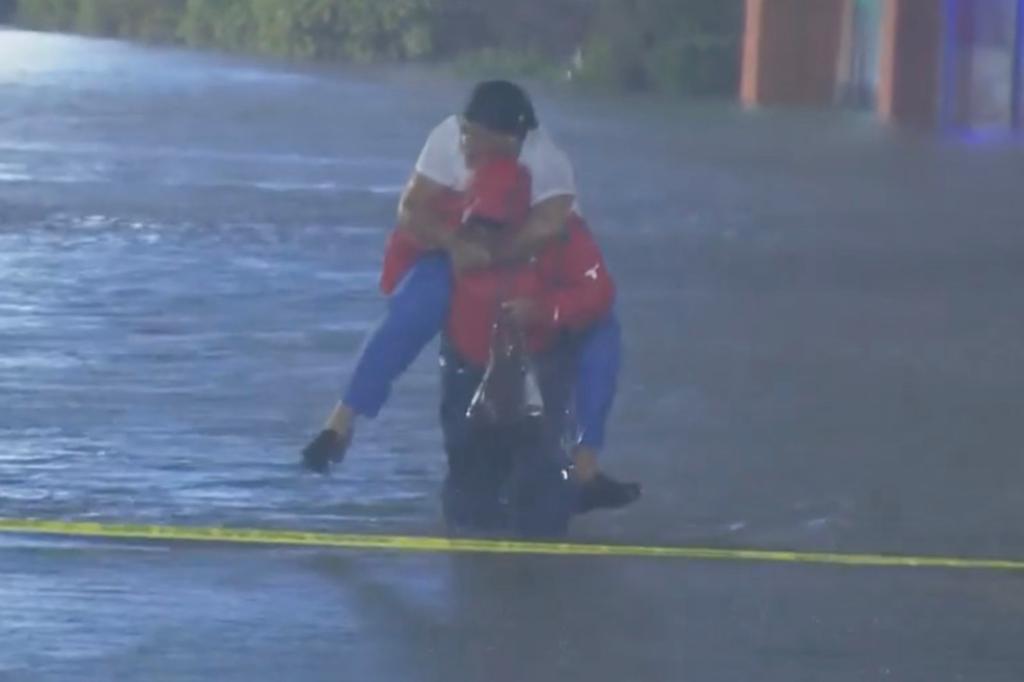 An Orlando-based television news reporter rescued a stranded a nurse whose car was disabled by massive flooding caused by Hurricane Ian.

Atkins carried the stranded woman on his back while holding her purse. The video was posted by Atkins’ former employer, WTMJ-TV in Milwaukee.

The Milwaukee station reported that Atkins went into the car and pulled the nurse out after she unsuccessfully tried to drive through the floodwaters.

The nurse was on her way to work at a nearby hospital when flooding made the roadway impassable.

Atkins’ former colleagues at WTMJ-TV applauded the Milwaukee native on the air as they played footage of the rescue.

Ian, one of the strongest hurricanes to hit the US in recorded history, made landfall several miles west of Fort Myers on Wednesday and left a wave of devastation in its wake.

Officials said fatalities numbered in the hundreds and many more were stranded after the Category 4 storm, packing 150-mph winds, ripped through the state.

Some parts of southwestern Florida recorded more than 20 feet of flooding.

The storm was downgraded to a Category 1 as it made its way northeast across Florida.

Although the storm moved offshore just before noon on Thursday, Ian brought record amounts of rainfall to central and northern Florida, causing “catastrophic flooding” in some parts of the region.

It is expected to make landfall again on Friday, hitting the Carolinas with hurricane-level winds.

nypost.com - 2 weeks ago
Ryan Tannehill threw for 333 yards and two touchdowns to outduel Aaron Rodgers as the Titans beat the Packers 27-17 on Thursday night.
Read More

nypost.com - 7 months ago
After the Yankees beat the Blue Jays, 3-2, Aaron Boone said Gallo was only available in an emergency situation and they would evaluate how he’s feeling on Tuesday.
Read More

nypost.com - 7 months ago
A man allegedly gunned down three Mississippi motel workers, then fatally shot a fourth person in a carjacking before he died in a standoff with cops this week, authorities said.
Read More
More News & Articles