"The so-called referenda was a sham, an absolute sham. The results were manufactured in Moscow," said President Biden.
Author: Steven Nelson
Published: 2022-09-29 06:54 pm 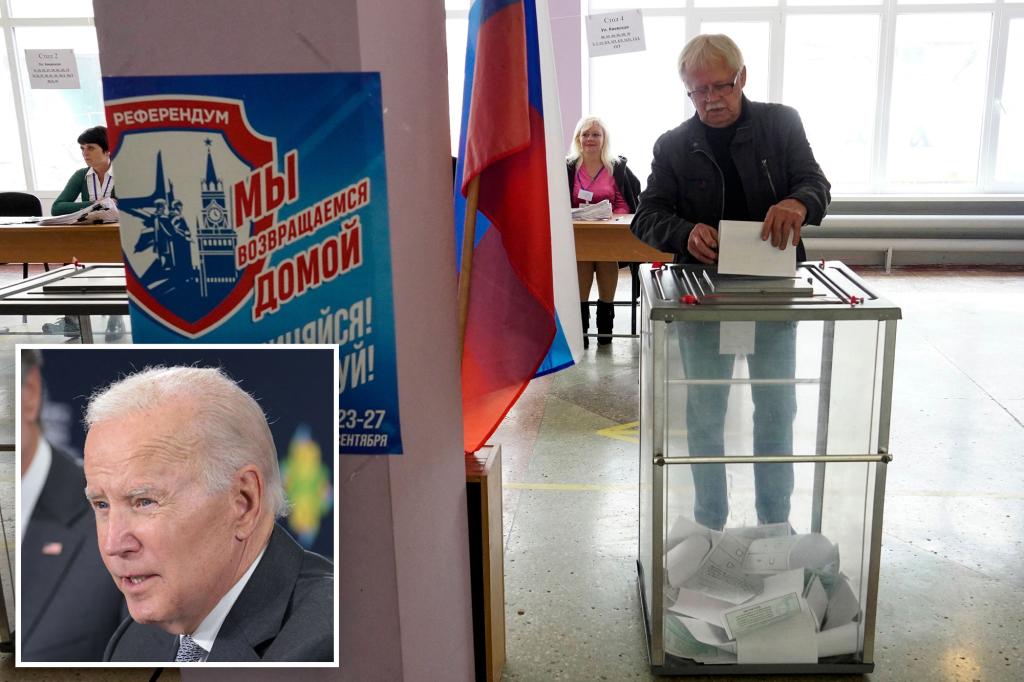 Biden said at a gathering of Pacific island nations in Washington that he wanted to “briefly address the shameless and transparent effort by Russia to annex parts of its neighbor Ukraine,” despite his unwillingness hours earlier to discuss the Nord Stream 1 and 2 pipeline leaks.

“The United States, I want to be very clear about this, the United States will never, never, never recognize Russia’s claims on Ukraine’s sovereign territory,” Biden said, despite saying in June that he wouldn’t rule out Ukraine voluntarily ceding land to end Russia’s invasion.

“The so-called referenda was a sham, an absolute sham. The results were manufactured in Moscow,” the president added.

“The true will of the Ukrainian people is evident every day as they sacrifice their lives to save their people and maintain the independence of their country and in the defense of freedom as well,” Biden said.

“Russia’s assault on Ukraine in pursuit of Putin’s imperial ambitions is a flagrant violation of the UN Charter and the basic principles of sovereignty and territorial integrity.”

Earlier Wednesday, Biden refused to comment on the pipeline breaches while visiting the headquarters of the Federal Emergency Management Agency in Washington.

Asked if Russia was responsible for the pipeline leaks, Biden answered: “Let’s stick with this, okay?”

“But it’s an important international issue,” the reporter protested

Putin plans to sign agreements Friday to absorb the four Ukrainian provinces into Russia. The Kremlin claimed 87% of voters in the Kherson province supported annexation after a five-day referendum, as did 93% in Zaporizhzhia, 98% in the Luhansk province and 99% in Donetsk.

The Luhansk and Donetsk regions have been partially controlled by pro-Russian rebels since 2014 — when Russia also annexed the Crimean peninsula following another referendum that lacked international credibility.

Sweden and Denmark on Tuesday said that the explosions that caused Nord Stream 1 and 2 to leak were intentional, but did not attribute blame.

The NATO alliance said Thursday that “currently available information indicates that [the leaks are] the result of deliberate, reckless, and irresponsible acts of sabotage,” but also refrained from pointing fingers.

Some American conservatives have floated the possibility that someone other than Russia was responsible for the pipeline issues — as former President Donald Trump warned the incident could trigger a larger war.

Meanwhile, Fox News host Tucker Carlson said Tuesday, “If you are Vladimir Putin you would have to be a suicidal moron to blow up your own energy pipeline — that’s one thing you would never do. Natural gas pipelines are the main source of your power and wealth. And most critically, your leverage over other countries.”

Although NATO countries have accused Russia of “weaponizing” its energy resources during the more than seven-month war, Germany under US pressure halted plans to open the Nord Stream 2 pipeline days before the Feb. 24 invasion of Ukraine and Biden under bipartisan pressure banned Russian oil imports in March.

Trump said in a Wednesday social media post that there should be a “negotiated deal” to end the Russia-Ukraine conflict because “[t]he entire World is at stake.”

“U.S. ‘Leadership’ should remain ‘cool, calm, and dry’ on the SABOTAGE of the Nord Stream Pipelines,” Trump wrote. “This is a big event that should not entail a big solution, at least not yet. The Russia/Ukraine catastrophe should NEVER have happened, and would definitely not have happened if I were President. Do not make matters worse with the pipeline blowup. Be strategic, be smart (brilliant!), get a negotiated deal done NOW. Both sides need and want it. The entire World is at stake. I will head up group???”

nypost.com - 3 months ago
Apple is also expected soon to unveil new models of the Apple Watch, iPad and Mac computers, some perhaps at the September event.
Read More

nypost.com - 2 years ago
The 11-year-old heroine of the 1964 classic “Harriet the Spy” is a street-smart tomboy who galumphs around her Upper East Side neighborhood in ratty jeans and a hoodie. She snoops on her neighbors — sneaking into dumbwaiters and scaling the roofs of
Read More

nypost.com - 1 year ago
New Colts quarterback is out indefinitely while he undergoes further testing on a foot injury he suffered at the end of Thursday's practice, according to ESPN's Adam Schefter.
Read More

The downs and ups of the Empire City Greys, the worst team in baseball

nypost.com - 4 months ago
The Empire City Greys don't have a home ballpark and have compiled a historically awful record in professional baseball, but that hasn't stopped them from dreaming big.
Read More
More News & Articles