Flooding from Hurricane Ian caused a horrific scene at a cemetery near Orlando where human remains were exposed amid pooling water.
Author: Katherine Donlevy
Published: 2022-09-29 09:42 pm 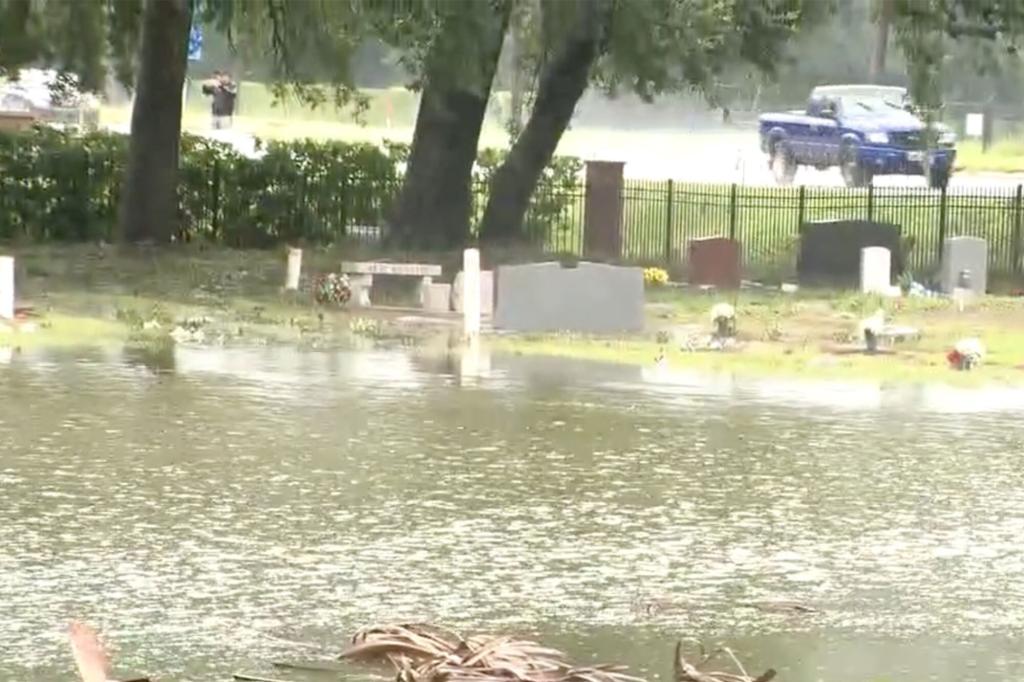 Flooding from Hurricane Ian caused a horrific scene at a cemetery near Orlando where human remains were exposed amid pooling water.

One casket at Oakland Cemetery in Oakland floated to ground level and was broken open by a fallen tree, exposing the body inside, Fox video shows.

The footage shows several felled trees throughout the property that was covered in floodwaters.

Oakland is less than 20 miles from Orlando, which is experiencing “historic flooding,” officials say.

People rushed to the graveyard Thursday in hopes their loved ones weren’t washed away by Hurricane Ian.

“Right now, it’s a lot. It’s kinda hard to really believe,” said one man. He had rushed to the scene to make sure his grandmother, who was only buried last Tuesday, hadn’t been one of those washed away.

The unidentified man said his uncle was supposed to be buried at the cemetery Saturday but doesn’t foresee the service happening anytime soon considering the floods.

“I was born and raised in Oakland and unfortunately this is happening,” the man said.

nypost.com - 6 months ago
Jose Inez Garcia-Zarate was sentenced on Monday to time already served over a federal weapons charge related to the high-profile case.
Read More

Original ‘West Side Story’ star: Get Rachel Zegler to the Oscars!

nypost.com - 8 months ago
Russ Tamblyn -- who played Riff in the 1961 adaption of the Broadway play -- wasn't too happy with the Academy.
Read More

nypost.com - 2 years ago
A woman posing online as “Gorilla Glue girl,” the Louisiana woman who went viral after smearing the sticky concoction on her mane, tried to cash in on the hype — until GoFundMe yanked her from its site. The imposter, claiming to be Tessica Brown, even
Read More

BTS to appear at UN as South Korean special envoys

nypost.com - 1 year ago
BTS, a mega-popular Korean boy band, is scheduled to attend the General Assembly with South Korean President Moon Jae-in from Sept. 19 to 23, according to the Korea Herald.
Read More
More News & Articles