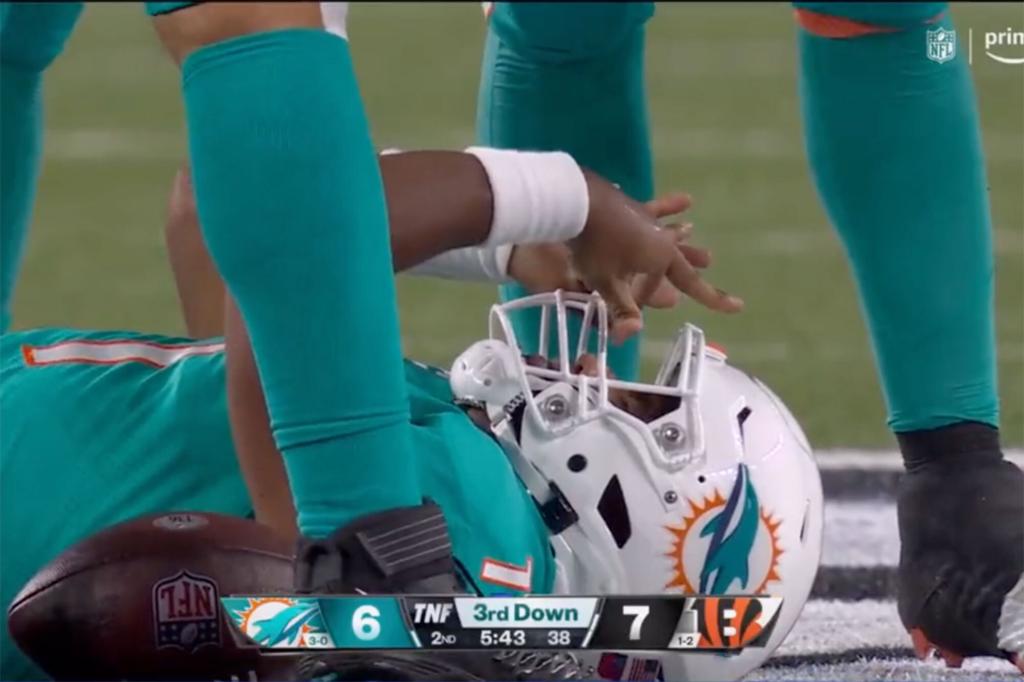 Near the end of the second quarter of the Dolphins’ “Thursday Night Football” matchup against the Bengals, Tagovailoa was taken off the field on a stretcher with head and neck injuries.

Tagovailoa was sacked by Cincinnati defensive lineman Josh Tupou, who whipped him around as he brought him down. Tagovailoa landed directly on his head, which slammed right off the field.

He was conscious and taken to Cincinnati Medical Center, a level 1 trauma center, according to the Amazon Prime broadcast. He has movement in all his extremities, the team announced.

When cameras panned closer to Tagovailoa, who remained in distress on the ground, his fingers could be seen visibly crooked. Play-play-play man Al Michaels and analyst Kirk Herbstreit explained on the broadcast that Tagovailoa’s finger misalignment is likely a response to a neurological shock, likely caused by the extreme blow to his head.

Just last week, Tagovailoa suffered a similar scary injury during the Dolphins’ win over the Bills. He was driven back on a hit by Buffalo pass rusher Matt Milano, and slammed his head against the ground as he landed. After trying to get up and run a few steps back to the huddle, he collapsed and was helped off the field.

He returned in the second half of that game, however, having passed the NFL’s concussion protocols. That return, and the medical clearance and processes involved in checking for a potential head injury or concussion, prompted controversy and an NFL Players Association investigation.

nypost.com - 7 months ago
New York City is ramping up construction of a Queens jail as part of its plan to phase out Rikers Island -- sparking outrage from residents.
Read More

Islanders will open new arena on Nov. 20 vs. Flames

nypost.com - 1 year ago
The Islanders’ first week at their new arena will feature games against John Tavares and the Maple Leafs, the crosstown rival Rangers and Sidney Crosby’s Penguins. The one problem? Those games won’t come until late November — six weeks into the 2021-22 NH
Read More

nypost.com - 6 months ago
New details emerged about Texas school shooter Salvador Ramos slaughtered 19 children and two teachers in Uvalde — including how he bragged about his sick plans on Facebook.
Read More

nypost.com - 7 months ago
"My heart is still there. That would be incredible. I hope it happens," he said.
Read More
More News & Articles