Adams has been a talker his whole career: a gadfly cop, a backbench state legislator and a New York borough president, a job custom-tailored for talkers.
Author: Bob McManus
Published: 2022-09-29 09:39 pm 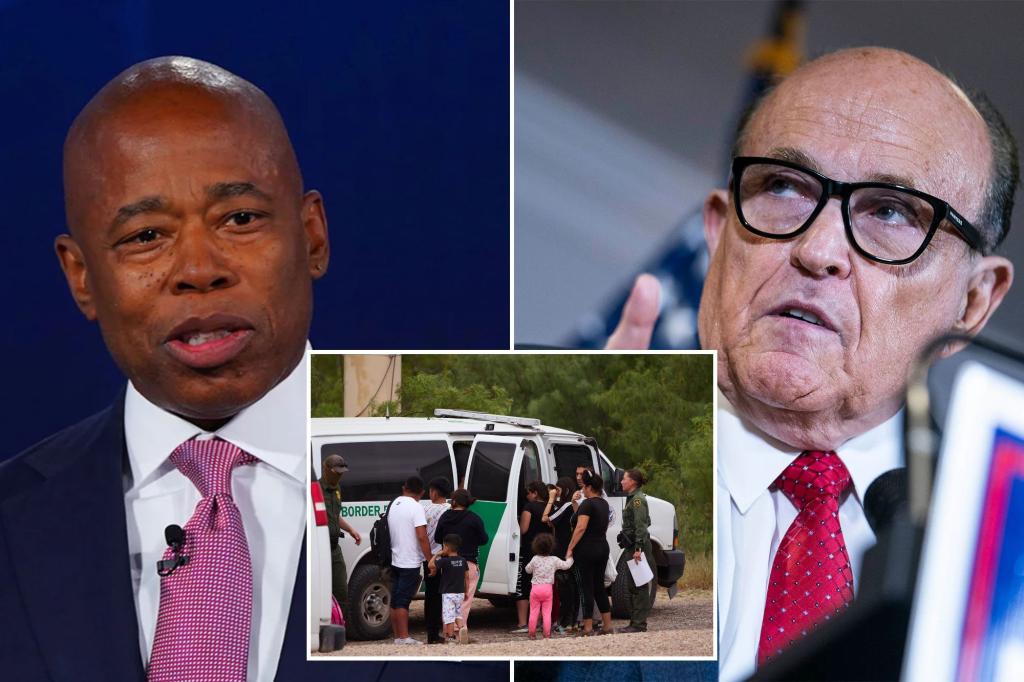 Do you remember when all the wise people deemed New York City ungovernable — and then Mayor Rudy Giuliani popped up to prove them wrong?

Mayor Eric Adams is looking at a potential Rudy Giuliani moment — a beckoning national leadership role in America’s border-collapse crisis — and all he does is talk.

Well, here’s a rough translation: It’s a mayoral surrender — an admission that the chief executive of America’s premier metropolis is taking a pass on an issue of critical significance to his constituents and his country.

That is, it’s a confession that he lacks both the imagination and the courage to lay blame for the migrant wave washing over America’s overstressed cities precisely where it belongs: on Joe Biden’s White House.

There, and on the toxic notions that borders themselves are illegitimate, that national sovereignty is a racist construct and that — as a practical matter — the only reason America has difficulty absorbing legions of destitute illegal arrivals is that it refuses to try.

Such believers think overwhelmed border-state mayors and governors, usually but not exclusively Republicans, are the real problem: foisting illegals off on northern big-city mayors, who are usually Democrats and always victims.

Which, of course, is sort of true. They are victims of federal policies that led to some 2 million migrants crossing borders into the United States during this pile-on — with many, many more on the way.

How many? Adams estimates perhaps 75,000 ultimately will land in New York — a total more than 40% larger than the city’s entire shelter population last summer. And, again, with more in the pipeline.

This could be high. But no matter how many show up, Adams should be howling bloody murder. Yet instead of demanding relief, he burbles on about Texas Gov. Greg Abbott buying bus tickets for migrants; he says he’s “frustrated” by the crisis — and prescribes his mysterious “decompression” solution.

He’s set about building a tent city in the Bronx, the borough where so many of New York’s social problems seem to wind up. (Hey, why not Times Square? That would be equitable, and it’s a gun-free zone — so everybody should be safe.)

This may be Adams’ best bad choice, but his rationale — that migrants can spend a few days in tents while waiting for spots in the city’s already-chockablock shelter system — seems unlikely to survive a collision with winter’s first nor’easter.

And in any event, it’s a half-measure. Where does the next tent city go? (How about Central Park, so the Upper West Side can get an up-close-and-personal look at the effects of flailing social policy?)

No, the moment demands more of this mayor. He certainly has leverage.

Adams can credibly demand an accounting from Senate Majority Leader Chuck Schumer, the Brooklyn boy who went to Washington and made good — seemingly to forget his roots. What does Chuck have to say about the migrant wave washing over his city?

And really, how could the White House ignore Adams? “New York has a brand,” declares Hizzoner, “and when people see it, it means something.”

So the fellow has standing. Whether he has credibility, and for how long, depends on what happens next.

Once upon a time they made a movie about Gotham’s brand. It was “Escape from New York,” a dystopian ’80s fantasy that resonated because the city at the time was indeed dirty, crime-ridden, seemingly out of control — and likely doomed, as the conventional wisdom had it.

Then came Giuliani, who challenged conventions. Largely through force of will, he rallied the city’s formidable institutional resources — commerce, media and, grudgingly, even the cultural institutions — to forge a renaissance that persisted well into the de Blasio administration.

Time hasn’t been kind to America’s Mayor — he can blame himself for that — but when it counted Rudy was more doer than talker, and it worked. He mattered.

Adams has been a talker his whole career: a gadfly cop, a backbench state legislator and a New York borough president, a job custom-tailored for talkers.

Now the moment demands a doer. Will he seize it? Will he matter? Or will he, well, just decompress?

Everybody will be streaming the heartwarming hit ‘Cha Cha Real Smooth’

nypost.com - 10 months ago
Cooper Raiff is the fresh comedic talent we’ve been waiting for.
Read More

nypost.com - 2 months ago
"Robbie was one of the funniest people I’ve met and used to keep us laughing constantly as kids on the set," Daniel Radcliffe, who starred as Harry Potter, told The Post in a statement.
Read More

nypost.com - 10 months ago
Until recently, the Islanders had two goaltenders they could feel confident in. Of late, though, neither have looked up to par.
Read More

Farhan, Tanvir Towhid who slaughtered family in murder-suicide lied to get guns

nypost.com - 2 years ago
The two Texas brothers accused of slaughtering four family members before killing themselves said they lied about their mental illness to get weapons — ripping gun control as “a joke.” In a rambling 12-page note initially linked to his Instagram page,
Read More
More News & Articles