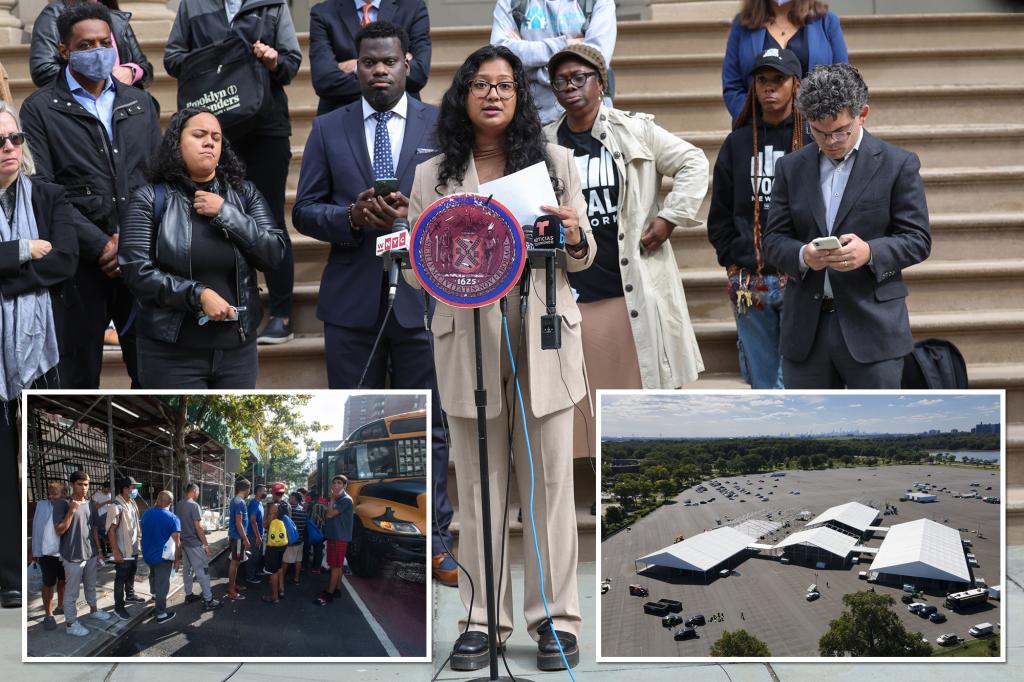 Now he’s getting it from both sides!

Progressive Democrats blasted Mayor Eric Adams on Friday over his plan to house migrants in a tent city in The Bronx — as opposition to his handling of the crisis spread beyond Republican and conservative critics.

“Didn’t this mayor go around and tear down the tents of the people who were fleeing the shelter in the first place?” she asked.

“So, those people’s tents are not good enough but we’re gonna build our own with a company that built the wall?” the far-left pol went on.

“A tent city in a flood-prone parking lot, far from mass transit, is an inhumane way to treat and serve and support New Yorkers who desperately need our help,” he said.

“This is the wrong approach.”

Councilmember Shahana Hanif (D-Brooklyn) also accused Adams of “exploiting this crisis to claim he does not have to follow the law.”

“We know that he is wrong. There is space and beds to house everyone safely and humanely in the city,” she said.

“The mayor is not above the law and must comply with the right-to-shelter mandate.”

Adams has previously come under fire from Republicans and conservatives for not demanding that President Biden solve the city’s problem by stopping the ongoing surge of migrants across the southern border.

About 15,500 migrants have arrived in the Big Apple since May, according to City Hall, and Adams has predicted that number could reach 75,000.

Adams last week announced plans for the tent city in the Orchard Beach parking lot, where migrants are processed before entering the city’s shelter system, which the mayor has said is near its “breaking point.”

City Hall is also finalizing a deal to set up a similar processing center on a cruise ship to be docked at the Staten Island Homeport and may lease a second vessel for the same purpose, a source familiar with the matter told The Post on Friday.

nypost.com - 2 years ago
The Post spoke with experts from The Knot and Zola— who answered everything from what to exclude in your list to which items you should duplicate. (Click here to jump to the FAQ.)
Read More

nypost.com - 4 months ago
It feels like Gerrit Cole's Yankees honeymoon lasted only four days before he was summoned right back to work under high-stress circumstances.
Read More
More News & Articles