Adler, in a statement, to Fox News Digital, did not confirm or deny he was asleep during the service.
Author: David Propper
Published: 2022-10-03 10:33 pm 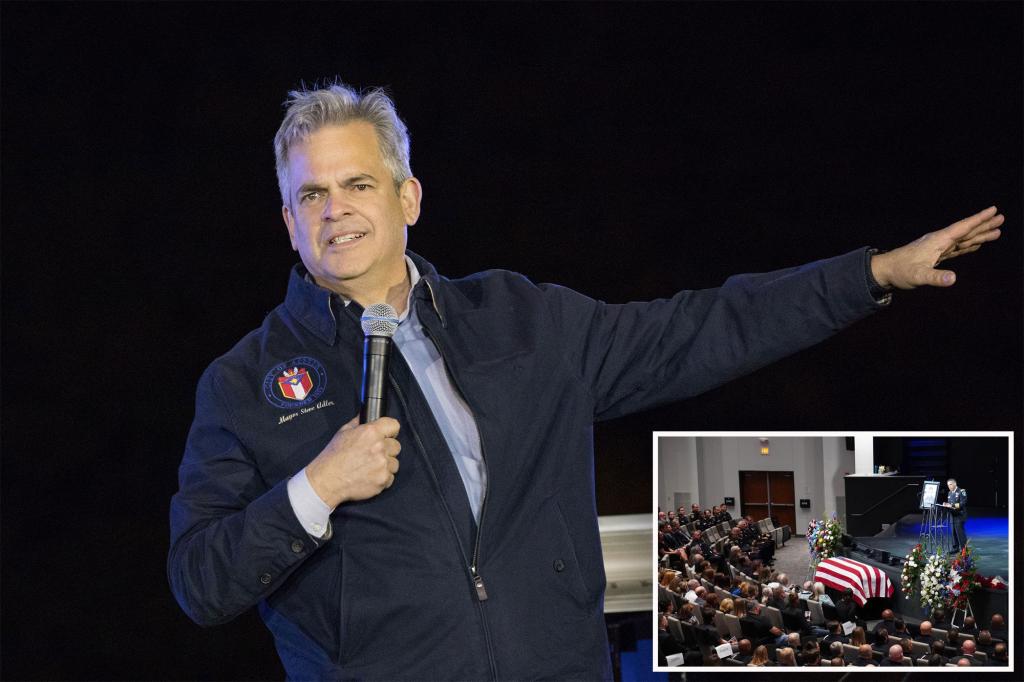 Austin Mayor Steve Adler apologized to the family of a late police officer after he was accused of falling asleep during a funeral honoring the cop who died in an off-duty motorcycle crash last month.

Adler expressed remorse after a photo was posted online by an Austin police officer that showed him with his eyes shut and head apparently resting on his chest during the memorial service for officer Anthony Martin.

Adler and the Austin police department have a strained relationship, stemming, in part, from a budget cut signed off by the mayor and other city council members in 2020 before it was later restored, the Austin American-Statesman reported.

“If you’re going to defund and destroy a police department as their mayor then attend a highly respected officer’s funeral, perhaps do not continue to disrespect that officer’s family, friends, and others by falling asleep,” tweeted Justin Berry, who is an Austin police officer and former GOP candidate for a state seat.

“You have time and time again shown nothing but contempt and utmost disrespect towards the men and women of the Austin Police Department but also our families,” added Berry, who is also the commissioner of the Texas Commission on Law Enforcement.

Adler, in a statement to Fox News Digital, did not confirm or deny he was asleep during the service.

“I want to express my deepest apologies to the family of Officer Martin. Officer Martin died 10 days ago and will forever be honored as a hero,” Adler told Fox News.

“This moment should be about him and his family, including his two daughters whose words today pierced my heart as a father.

“I hold Officer Martin in the highest regard. May his memory be a blessing to his family, and to the city he served.”

The service began at 11 a.m. and lasted about an hour, the Austin American-Statesman reported.

Thomas Villarreal, the head of the Austin Police Association, told the newspaper the mayor’s actions distracted from honoring Martin.

“I have expressed my frustration directly to Steve and will deal with that issue at a later time,” he said. “For now, I ask everyone to please keep Tony’s family in your prayers.”

The Austin City Council voted to slash $150 million from the police department’s budget when the defund-the-police movement was at its peak with a move to reduce the budget by $20 million right away in 2020, the Texas Tribune reported back then.

Fox News reported the city was forced to reverse those cuts after a law was passed by Texas state lawmakers.

Martin was killed in a crash while on his way home from a night shift when a vehicle turned left in front of Martin’s motorcycle on the highway, the Texas Department of Public Safety said, according to Fox 7.

Martin started his career with Austin police in 2006 after serving in the Air Force for two decades, according to the American-Statesman.

Adler previously requested a moment of silence at last Thursday’s city council meeting and offered the city’s support in a conversation with Martin’s widow, the newspaper reported.

“To the officer’s family, we grieve with you and to the entire force with the loss of their colleague,” Adler reportedly said.

nypost.com - 1 year ago
The doppelgänger bore führer-evoking facial hair and a soccer jersey engraved with the number 88, code for "Heil Hitler" in the neo-Nazi movement.
Read More

nypost.com - 2 years ago
Police are searching for a man they say kidnapped his ex-girlfriend’s son from a Hell’s Kitchen playground. Three-year-old Majesty Brown, was playing at the McCaffrey Playground on West 43rd Street and 9th Avenue Thursday evening at around 5 p.m. when his
Read More

nypost.com - 1 year ago
With New York State in the throes of a budget disaster, policymakers could build a nest egg by creating an Education Savings Account program.
Read More

New Jersey city to get rid of Facebook page over bullying, mayor says

nypost.com - 2 years ago
A New Jersey city is logging out of social media after its official Facebook page became swamped with bullying and threatening comments — with the mayor fearing the platform was “radicalizing” the town. Lambertville Mayor Julia Fahl announced the city wil
Read More
More News & Articles