A shelter run by the Humane Society Naples is flying cats and dogs out of state to make room for a wave of new arrivals from families whose homes were destroyed and are now unable to care for a pet. (Image credit: Scott Neuman/NPR)
Author: Scott Neuman
Published: 2022-10-04 10:53 am 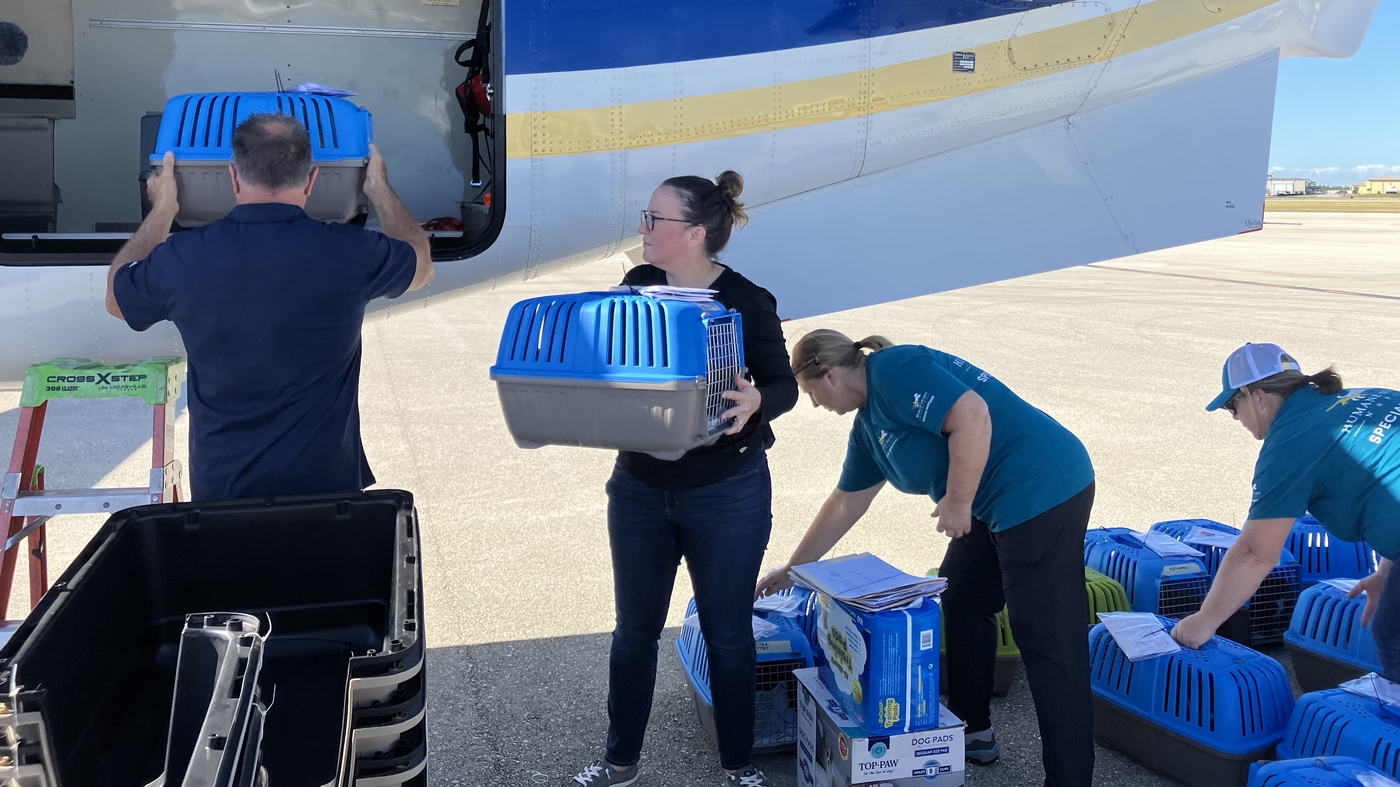 NAPLES, Fla. — On the tarmac of a small private Naples airport, south of Fort Myers, a team from the Humane Society Naples waits with 40 cats in small plastic carriers as a twin-engine Beechcraft taxis up.

The feline cargo is about to be swapped for dozens of empty canine crates. "After we get the crates off, we'll put the cats on and they will be on their way," says Sarah Baeckler, CEO of Humane Society Naples.

It's all part of an operation to free up space in local animal shelters which, in the wake of Hurricane Ian, are expecting to soon be swamped by new arrivals.

And it's not just pets separated from their owners in the storm that rescue groups are preparing for, but also "an influx of surrendered animals from people who have other things they have to deal with," Baeckler says.

The pet lift isn't cheap, but the flights are necessary. Many roads remain impassable due to flooding, so ground transport isn't always an option. Tennessee-based Race for Life Rescue is providing the plane, and the Bissell Pet Foundation, a charitable arm of the vacuum cleaner company, is footing the bill. The animals will be flown to a shelter in Tennessee, where they'll be put up for adoption.

Ian has left many families unable to care for their pets

Once the morning flight takes off, preparation quickly begins for a second one around noon, this time in cooperation with the nonprofit groups Petco Love and Wings of Rescue, that will include both cats and dogs. Humane Society Naples says it's planning to fly out more than 450 animals in all.

Back at the shelter, there's already evidence of the influx Baeckler predicted, as people trickle in to drop off pets for which they are no longer equipped to care.

Theresa Barteau arrives to discuss the heart-wrenching decision she's been forced to make. She's had to leave her storm-damaged house, and it could be months before she's able to move back. Meanwhile, she can't find a hotel that will take her six-year-old Pitbull-Weimaraner mix, Dolly.

Barteau wants to know if the Naples shelter can watch her dog just until she can get her life back together.

"We're so close to Dolly," Barteau says through her tears. "We don't want to see her surrendered. We want to find a place where we can get her back."

Shelter staff gently reassure her the dog will be well cared for until it can return home.

Barteau's sincere intention to reclaim Dolly belies a sadder truth for others in her situation, says Baeckler. "Unfortunately, they often end up needing to surrender them."

The challenges for pet owners may not be short-lived

Monday, the official reopening, Perry says they received eight stray dogs, most or all that likely belong to someone. That's more than usual. Several kittens have come in too, including two surrendered by their owners.

But she sees a more systemic problem looming ahead.

"Housing is difficult in Collier County," she says. Even before the storm, many landlords didn't accept pets. That's only going to get worse with all the rentals that have been damaged or destroyed and at least temporarily taken out of the market.

www.npr.org - 2 years ago
The daredevil aviator in Maggie Shipstead's new novel was inspired by Amelia Earhart. Shipstead says she wants to investigate the difference between death and a disappearances like Earhart's (Image credit: Knopf)
Read More

www.npr.org - 1 year ago
Afghans have lived through Soviet and U.S. invasions, civil war, insurgency and a previous six-year period of heavy-handed Taliban rule. Here are some key events and dates from the past four decades. (Image credit: Robert Nickelsberg/Gamma-Rapho/Getty
Read More