Protesters are gathering in Burkina Faso's capital where West African regional mediators are stepping up pressure on the country's new junta
Author:
Published: 2022-10-04 10:53 am 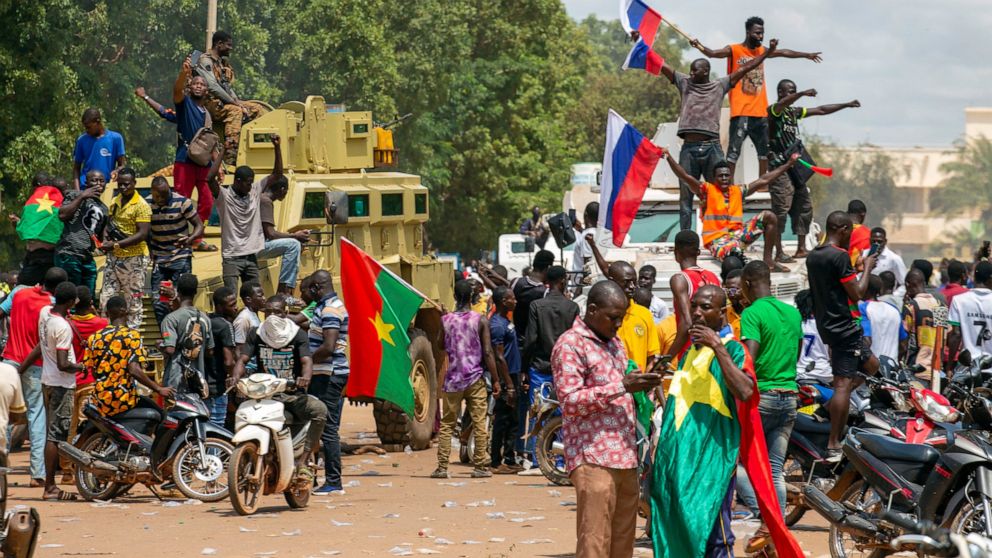 The meeting Tuesday in the capital, Ouagadougou, comes amid fears that the second coup to hit Burkina Faso this year will further delay democratic elections and a return to constitutional order.

Mediators from the West African regional bloc known as ECOWAS have already spent six months this year trying to persuade the previous junta regime which seized power in January to commit to a timetable for new elections. Then last week a group of soldiers led by Capt. Ibrahim Traore overthrew the interim leader and declared themselves in charge.

ECOWAS has also been pushing for a return to democracy in neighboring Mali for more than two years. The regional bloc imposed stiff financial sanctions but later lifted them even though new elections have not yet been held.

“ECOWAS has little leverage or credibility now after the failure of its hardline approach toward Mali," said Michael Shurkin, senior fellow at the Atlantic Council and a director at 14 North Strategies. “It was and is clear that the threat of sanctions gave neither Damiba nor Traore pause.”

The same is true too for Guinea, the third ECOWAS country hit by a coup in recent years, he added.

“Part of the problem is the wide perception that ECOWAS serves French interests, which makes it easy for leaders to resist in in the name of “pan-Africanism” and “sovereignty,” Shurkin said.

After an ECOWAS delegation arrived Tuesday in Ouagadougou, an armored personnel carrier guarded the government building where they met as crowds waited nearby. Journalists were not allowed inside.

Burkina Faso's capital remained tense after a weekend of unrest when demonstrators attacked the French Embassy in Ouagadougou after leaders of the new junta alleged that the ousted interim leader was sheltering at a French military base. France vehemently denied it and Lt. Col. Paul Henri Sandaogo Damiba later arrived in the neighboring country of Togo after agreeing to resign.

France's ambassador to Burkina Faso, Luc Hallade, put out a statement advising the 4,000 registered French citizens in the country to continue sheltering at home.

“I would like to salute the composure you have shown throughout these days of crisis,” Hallade said. “Of course, we all hope that the return to normalcy that seems to be taking shape in the last few hours will be confirmed. But until the situation becomes stable again, I invite you, once again, to stay at home unless there is a compelling reason or an urgent need for supplies.”

Traore, Burkina Faso's new coup leader, has said he plans to keep the commitments made by the previous junta to ECOWAS, including holding new elections by 2024.

“We hope that the return to normal constitutional order will take place even before that date, if the situation allows it,” Traore told Radio France Internationale in an interview that aired Monday.

Some of Traore's supporters are calling on him to get Russian mercenaries to help end the Islamic insurgency that has killed thousands and forced 2 million to flee their homes in recent years. Neighboring Mali took a similar move after a coup d'etat there in 2020, though those forces from Russia's Wagner Group have been accused of committing human rights abuses.

In January, Damiba came to power vowing to improve Burkina Faso's security but the jihadi violence continued unabated during his tenure. Traore is promising to do what his predecessors could not, pledging to improve conditions for soldiers in the field and to control the insurgents' violence.

abcnews.go.com - 6 months ago
An Indigenous expert and a British journalist disappeared in a remote area.
Read More

abcnews.go.com - 8 months ago
Harrowing footage shows the moment a health worker in Argentina saved a baby who was suffering from bronchial aspiration.
Read More

abcnews.go.com - 2 years ago
The defense team for former President Donald Trump argued that his Jan. 6 speech did not incite violence.
Read More

WATCH: This boy had the best reaction to his dad opening his gift from the dollar store