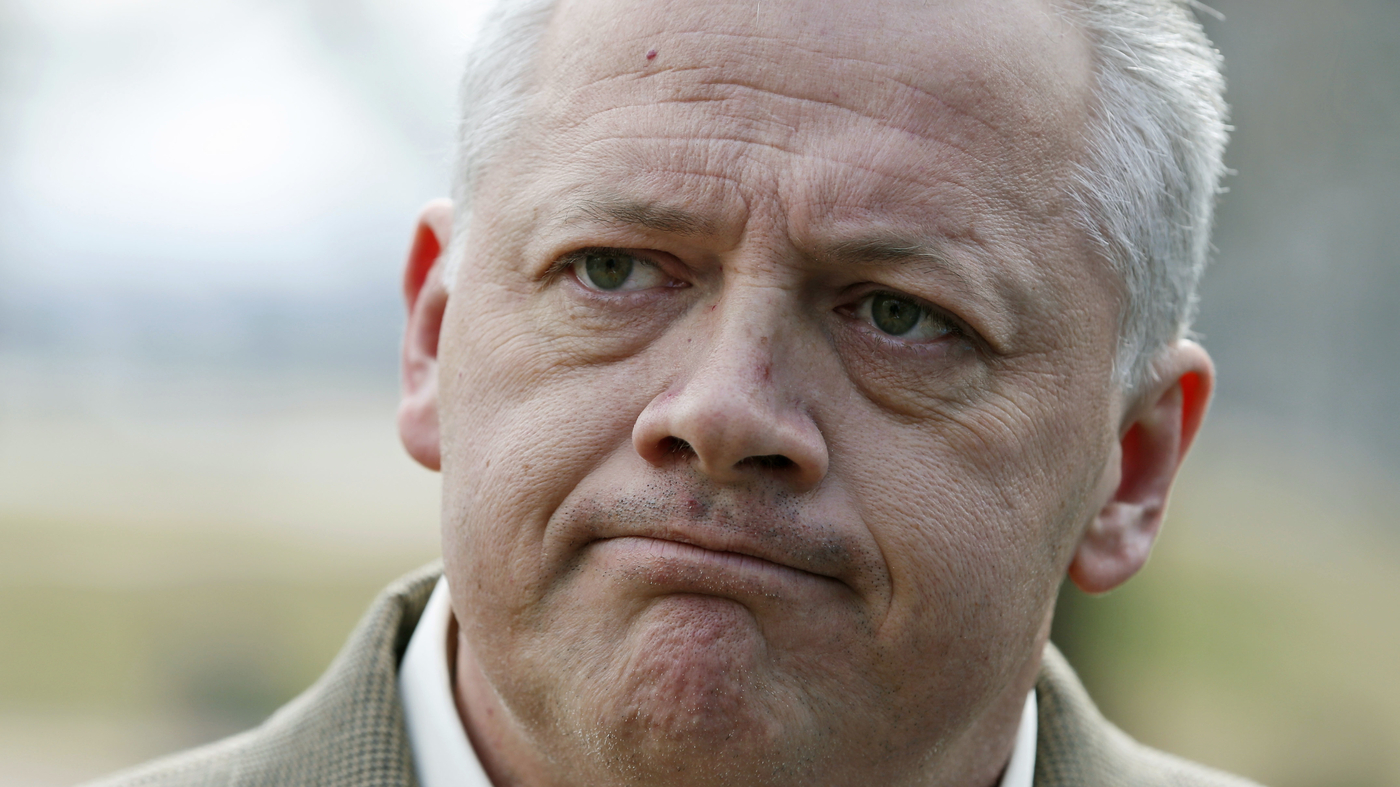 Denver Riggleman served eight months as a senior technical adviser for the congressional select committee investigating the Jan. 6, 2021 attack on the U.S. Capitol. In a new book, titled "The Breach," Riggleman delves into a few key parts of the committee's investigation, including an examination of a trove of text messages sent and received by former White House chief of staff Mark Meadows in the lead-up to the Capitol riot. The book also revealed for the first time that during the Capitol breach, someone at the Trump White House made a call to a rioter who had entered the building.

Riggleman took a somewhat unusual path to the committee. After serving in the United States Air Force and working as a contractor for the National Security Agency, he ran for - and won - a seat in Congress representing a district in Virginia in 2018.

At the time, Riggleman was a Republican. He describes himself as "a full-blooded redneck." Former president Trump actually endorsed him - twice - and Riggleman joined the staunchly conservative House Freedom Caucus.

Despite Trump's endorsement, Riggleman lost a primary to a more hard-right Republican, and Riggleman became more outspoken about the former president's embrace of extremism and amplification of the far-right QAnon conspiracy theory. After the Nov. 2020 election, Riggleman was one of the few Republican elected officials to quickly acknowledge Joe Biden's victory.

When Congress eventually launched its investigation into the Jan. 6 attack, Riggleman raised his hand and joined the committee, where he found himself examining some of his former colleagues who tried to overturn the election. He ultimately left the investigation in April 2022, before the committee began holding public hearings. Some members of the committee have expressed frustration with Riggleman's decision to write a book, especially before the final hearing has taken place.

In an interview with NPR, Riggleman discussed his work on the investigation, his experience as a member of congress, and whether the committee should submit a criminal referral to the Department of Justice.

Here are four takeaways from that conversation:

The significance of the White House call to a Jan. 6 rioter remains unclear

"The Breach" revealed for the first time that congressional investigators discovered at 4:34 pm on Jan. 6, 2021, someone used a White House phone to call a man who had participated in the rioting.

"The call was outgoing to an individual rioter as the violence played out," Riggleman writes.

The identity of the person who made the call remains unknown.

However, multiple news outlets have identified the recipient of the call as a low-level Capitol riot defendant, who pleaded guilty to a non-violent misdemeanor. According to court documents, he had already left the building by the time of that phone call.

The call lasted nine seconds, and the content is also unknown.

Since this detail was made public, some members of the Jan. 6 Select Committee have appeared to downplay its significance.

"That's one of thousands of details that obviously the committee is aware of," said Rep. Jamie Raskin (D-Md.) on NBC's Meet the Press. "And so, you know, to me, it's interesting, but much less interesting than the fact that Donald Trump told the crowd in public, 'You've got to fight like hell. And if you don't, you're not going to have a country anymore.'"

"Nine seconds is an eternity to a counterterrorism analyst," Riggleman said. "The fact that the call came from inside the White House at a desk, was routed through the switchboard or defaulted to that number and went out to a rioter, is something that's extremely important."

During his short-lived political career, Riggleman vocally supported Trump and joined the House Freedom Caucus not out of principle, he says, but out of political expediency.

Thank you @realDonaldTrump for your endorsement. I've got your six. #MAGA

"There's some things that you do that you think you have to [do to] win," he said. "I had a consultant who was correct. He said, 'hey, Denver, you gotta be a little bit crazy if you're gonna beat the crazier people on the right.'"

He said a similar dynamic may have played a role in the thought process for some House Republicans, who supported Trump's lies about the election.

"I know there's a few that absolutely didn't believe the election was stolen, but there was no way they could go against the grain," Riggleman said.

In Riggleman's case, conservatives in his district turned on his campaign in 2020, in part because he officiated a same-sex wedding for his campaign volunteers. That contributed to his loss of a primary contest against an ever more conservative opponent.

"Being a politician - I wasn't as talented as I thought I was gonna be at it," Riggleman told NPR.

He says he now regrets his support for Trump, and in 2020, he did not vote for the then-president.

"I might have been one of the first Republicans that was a sitting member to see that Trump was retweeting some pretty crazy QAnon-based sort of troll-farm conspiracies and some things that were very dangerous, even things that were calling for violence," he said. "So no, I did not vote for him."

Instead, Riggleman said he decided to write in himself for president.

Former White House chief of staff Mark Meadows provided a large number of text messages to congressional investigators, which Riggleman describes as "the crown jewels" for the committee's work.

"What we found in the texts was a road map to an insurrection fueled by apocalyptic propaganda," Riggleman writes in the book. "It was a toxic stew of old-school zealotry and internet authoritarianism."

Among the trove of messages were texts sent by Ginni Thomas, a longtime conservative activist and spouse of Supreme Court Justice Clarence Thomas. In those texts, Thomas expressed the view that the 2020 election was stolen, and appeared to brainstorm legal and congressional strategies to overturning the result.

Shortly after the Nov. 2020 election, Thomas wrote a message to Meadows that bore some similarities to rhetoric spread by adherents to the QAnon conspiracy theory:

"The first time I saw the Ginni Thomas texts, I called it a 'bourbon text,'" Riggleman said. "You have to take a shot of bourbon to get through it."

Ginni Thomas testified to the Jan. 6 committee last week, and denied ever discussing her post-election activities with her husband.

Riggleman expressed skepticism that Ginni and Clarence Thomas maintained such a strict firewall when it came to discussions of the election.

"It's possible that Clarence Thomas didn't know about Ginni Thomas' activities not just around Jan. 6 and the election but through the years as a Republican activist," he said. "But I don't know if it's probable."

Riggleman said Congress would be justified in taking the extraordinary step of seeking information from Justice Thomas himself, though he said it was unlikely given that the committee is currently wrapping up its work.

"I think it would've been appropriate to talk to Justice Thomas," he said. "I think Ginni [Thomas] coming in is a heck of a great step by the Committee. But I do believe, at some point, the American public is going to have to come to their own conclusions about that."

Should the Jan. 6 committee issue a criminal referral to the Justice Department?

Political and legal commentators - as well as members of the Jan. 6 committee themselves - have debated whether Congress should make a criminal referral to the Department of Justice at the close of their investigation.

The decision on whether to charge former President Trump or any other target of the investigation would still remain with the Justice Department, but a referral could potentially add political pressure on Attorney General Merrick Garland.

"Let the DOJ make that decision," he said. "Instead of getting caught up in the politics of referrals, just present the best case you can to the American public."

"They've already proven that based on conspiracy theories, based on coordination, that based on really a president that decided to really cavort with the craziest in the far-right base...all that suggests that you had a president that was unfit for office," Riggleman said. "Because even with criminal referrals, it's gonna be up to the voters if they want to support that kind of nonsense."

www.npr.org - 8 months ago
Barring legal challenges, Idaho's law is scheduled to take effect in about a month. It bans most abortions after about a month and allows health care providers to be sued. (Image credit: Idaho Statesman/TNS)
Read More

Florida family fined for putting Christmas decorations up too early.

www.npr.org - 1 year ago
Christmas creep isn't allowed here. The family said they didn't know it was against the homeowner's association rules.
Read More