Mayra Flores, Cassy Garcia and Irene Armendariz Jackson are all married to border patrol agents — and are all inspired by their husbands' jobs to run for Congress in Texas.
Author: Michael Kaplan
Published: 2022-10-05 04:45 pm 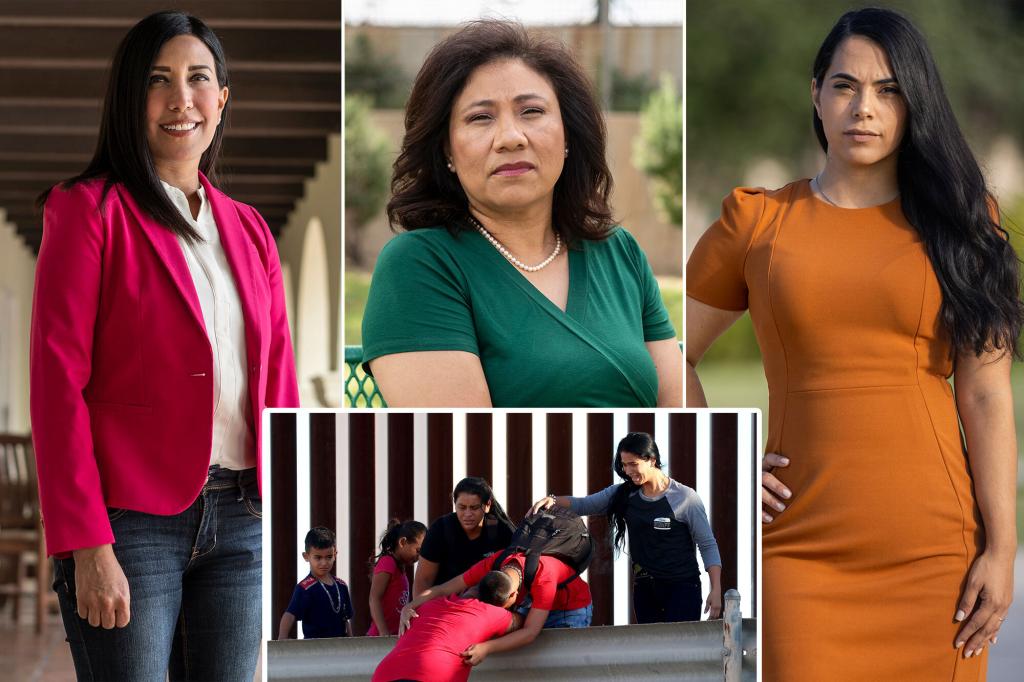 Living on the American side of the Mexican border can be chaotic and dangerous, as unauthorized migrant refugees — some 700,000 during this fiscal year alone — will go to incredible, even fatal lengths in attempting to cross into the US.

For the men and women who work as border patrol agents, the out-of-control situation often creates debilitating stress.

Now, three wives of border patrol agents are trying to do something about it by running for Congress in Texas’ Nov. 8 election. All are Republicans.

Here are their stories and their motivations for stepping up:

Irene Armendariz Jackson recalled her husband, William Jackson, coming home with harrowing stories from the frontlines of the border crisis.

“Each evening, after work, he spent an hour or more decompressing in the bedroom,” she told The Post. “He had to recover from the mental stress of what he saw and heard at the border — like children telling him about the abuses they withstood on their trips north.”

And the abuses were not just caused by the people who brought them across the border.

“An RV that was all bathrooms was brought to the border, so the aliens would have facilities — but kids would defecate on the floor, next to the toilet, because they did not know how to use toilets,” the 52-year-old candidate said, recounting just one of the stories that drove her husband, who served in El Paso and was also a border patrol supervisor at the Border Patrol Academy in Artesia, NM, to despair.

When he would finally emerge from the bedroom at night to join her and their three daughters — Allison, 28; Renee, 24; and Grace, 15 — it was often too late for family time. “By that point, we usually had already eaten. So he would eat alone,” Armendariz Jackson said. “What he experienced at work absolutely disengaged him. It brings challenges to the marriage and the family.”

Jackson finally retired in 2021, after 24 years of working at the border. One of the straws that finally broke him, his wife of 29 years said, was when New York Congresswoman Alexandria Ocasio-Cortez visited El Paso in 2019 and “made accusations that the border patrol was making women drink out of the toilet. Obviously, it was not true. But my husband and others have not been given a voice and the false accusations were never debunked.”

That’s also when Armendariz Jackson — an El Paso native whose parents are naturalized citizens originally from Mexico — decided to quit selling real estate and run for Congress herself. While she lost to Democrat Veronica Escobar in 2020, the two are facing off again in November.

“I stand for bringing back law and order and making sure the border patrol agents are allowed to fulfill their duties, which would largely include keeping illegal immigrants out of the United States,” she said.

She explained that she will push to reinstate investigative procedures, which, Armendariz Jackson maintained, were minimized after the Trump-era Remain In Mexico policy was lifted by the Biden administration in August. It had prevented asylum-seekers from staying in America while awaiting immigration decisions.

“Illegal immigrants previously went through an interview process to be vetted about whether or not they are lying in regard to their intent, who is waiting for them in America and whether or not they have a criminal history,” the candidate said. “Border patrol agents are not doing the interviews now. They are just fingerprinting [asylum seekers], looking at records from third world countries — sometimes in handwritten notebooks — and moving them along since there are so many people coming over the border.”

Armendariz Jackson, a grandmother of three, added: “We need to enforce the laws of our own constitution. The constitution says that the government is supposed to provide tranquility for its citizens. The American public is not tranquil right now. Mayhem at the border contributes to that.”

Running in Texas’ 34th Congressional District, from Brownsville to Corpus Christi and including McAllen

Flores won a special election in June — taking over for Rep. Filemon Vela Jr., who had resigned mid-term, and turning the historically Democratic seat Republican.

And she did it by running on a very personal platform: The 35-year-old is not only married to a border patrol agent, she actually comes from a family of them.

“I see the stress that my husband goes through and I see it in other border patrol agents as well,” Flores, who is now facing Democratic challenger Vicente Gonzalez on Nov. 8, told The Post. “I see the stress in my relatives and in my friends. What they are going through is not fair.”

Flores is the first Mexican-born member of Congress and previously told The Post that she legally came to the US with her family at the age of 6, from Tamaulipas, Mexico. Her husband, John Ballejo, serves at the border in McAllen. (She declined to speak about their four children, for the sake of privacy.)

“We all worry about our husbands being out there with the criminal element,” Flores said of herself and other wives of border-patrol agents. “Criminal organizations are taking over the Southern border. They are being paid to bring people in and becoming more powerful as a result.

“I tell him to always take care of himself and to always have his body armor on,” she added. “I constantly tell him to watch his back and remind him that he has a family to come home to.”

The solution, she said, “is to secure our borders and allow border patrol agents to do their jobs. We need to hire more agents, bring in technology and focus on legal immigration.”

But, Flores added, a lot of the stress is caused by the Biden administration and other elected officials.

“It’s the constant disrespect from Congress, disrespect from people on the left, disrespect from our president as well,” she said. “[Border patrol agents] are saving lives of immigrants abandoned in the middle of nowhere. I don’t care where these people are from; they should not be abandoned in car trunks or tractor trailers and left to die. There is no respect for human life. We have to work together to secure the border. It is not a South Texas problem. This is an American problem.”

Running in Texas’ 28th Congressional District, including parts of San Antonio and Laredo

Working as the state deputy director for Sen. Ted Cruz made Cassy Garcia consider running for political office herself. Hearing from her husband — a border patrol agent of 26 years — about what was going on at the Southern border convinced her she had to do it.

“[He] says the administration is not doing its job and not enforcing laws that are on the books; he has seen it all getting worse,” Garcia, who will not reveal her husband’s name or station over security concerns, told The Post. “There is a morgue in Laredo that is at capacity with the bodies of unidentified immigrants.”

The 41-year-old said she is particularly pained by the deaths of migrants attempting to enter the United States from Mexico in her district — including at the perilous Rio Grande.

According to NPR, more than 800 migrants died while trying to cross the river during the fiscal year that ended September 29.

“Children die because the mothers [trying to get across for illegal entry into the United States] don’t realize how fast the current is,” said Garcia. “Every single day, the agents do search-and-rescue and pull bodies up from the river. One mother was trying to come across and lost the grip of two children. The four-year-old drowned and the one-year-old was pulled out but died.”

Trying to prevent tragedies like those, Garcia said, has “caused PTSD for many of the understaffed agents. Then they go home to be with their families, and it is hard to be the wife of a border patrol agent. You hear these stories and you feel helpless. The border patrol agents have to deal with [migrant] mothers being raped and children being molested. Migrants lose their lives and cartels get paid off. Where is the outrage? The [Biden] administration is not doing its job.”

In running for office, she added, “I want to provide a voice. I know what needs to be done — adding personnel, improving technology, fixing the infrastructure. Come November [and election day], people will show that they are sick and tired of what they are seeing..”

Stripper accuses Halsey of ‘humiliating’ her at 2019 LA club event

nypost.com - 1 year ago
Just seconds into her performance, a manager reportedly ordered her off the stage because Halsey wanted to get up and sing.
Read More

The narrative around Dustin Johnson is changing

nypost.com - 2 years ago
The way Claude Harmon III sees it, if a scientist was to hunker down in the lab and construct the perfect golfer … that golfer would be Dustin Johnson. Harmon, of course, is biased because he’s Johnson’s swing coach. But he has a point about the latest
Read More

nypost.com - 4 months ago
Rushdie has faced death threats for more than three decades over his 1988 novel, whose depiction of the Prophet Muhammad was viewed as blasphemous by some conservative Muslims.
Read More

nypost.com - 5 months ago
An ex-stripper relayed the humiliating tale of a how a tattoo artist trolled her with a cruel inkjob.
Read More
More News & Articles