Baseball’s sliding doors could have radically altered this Mets team 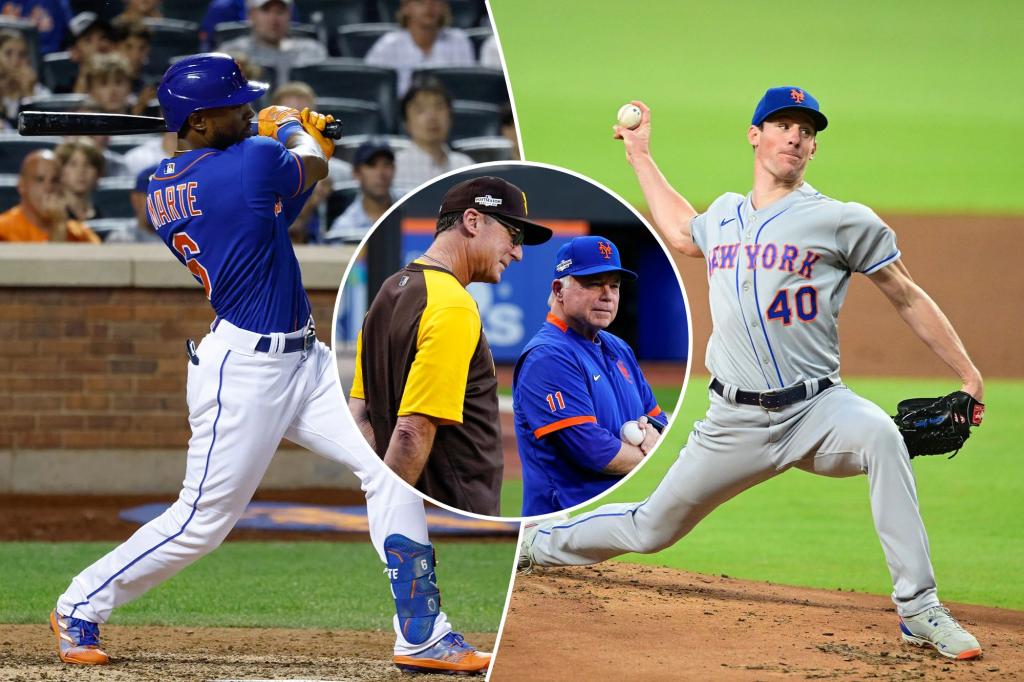 Check the visiting dugout at Citi Field. Note the manager. Because Bob Melvin could have been on the other side.

After last season, the A’s picked up Melvin’s option. But it became known they would not block him from a better situation. Sandy Alderson, running baseball operations last October because the Mets lacked not just a manager, but a general manager too, had shared Oakland history with Melvin. He liked and respected Melvin, who was internally viewed by the Mets as the kind of steady, proven manager needed to steady the clubhouse and professionalize the dugout.

Melvin was in Los Angeles and, so by chance, was Steve Cohen. Alderson set up to fly to the West Coast to join them for a meeting. But the Padres were further along in their pursuit to replace the fired Jayce Tingler. And they had two key items the Mets lacked – notably spring training in Arizona near his Scottsdale home, but also an in-place GM (A.J. Preller).

Both Melvin in person on Monday and Cohen by text Tuesday downplayed the idea the Mets were close in this competition. They just were too late in the process and geographically disadvantaged.

But geography actually played a part in the big move the Mets made next. Alderson figured since Cohen was out West already, why not just meet with Billy Eppler, who was living in Orange County. So Eppler met with Alex and Steve Cohen at their Los Angeles home, accelerating a process that two weeks later would lead to Eppler being named GM. Eppler, during the MLB-imposed lockout, hired Buck Showalter as manager. And that is why Melvin was in the visiting dugout and Showalter on the home side when Game 1 of a wild card series began Friday night.

This, nevertheless, is a reminder of just how many sliding doors there are as a baseball team is constructed. Had the Padres, with their largest payroll ever, had a successful 2021, they might not have been looking for a manager. The Mets then would have been more attractive to Melvin, who actually used to spend his offseasons in New York.

That was not the only sliding door and what follows is not a complete list. But consider how these Mets (and their season) could have looked so different:

What if Michael Conforto accepted the qualifying offer?

The belief was that Noah Syndergaard was the more likely of the duo to take the $18.4 million for 2022. But his agents recognized quickly that there was a market for the righty and Syndergaard signed a one-year, $21 million pact with the Angels about the same time Eppler was hired by the Mets.

Conforto’s market was dubious coming off a mediocre 2021 and being tied to draft-pick compensation for rejecting the qualifying offer. He could have accepted the offer, played one year and gone back into the market this offseason without being tied to compensation. Instead, he dove into free agency, incurred a shoulder injury and saw his market crash; Conforto never signed a contract this year. If he accepts the qualifying offer, the Mets almost certainly do not sign either Starling Marte or more likely Mark Canha.

What if Steve Matz had accepted the Mets’ offer

Remember in late November when Cohen was furious at what he depicted as the unprofessionalism of Matz’s agents for – in the owner’s opinion – reneging on a verbal agreement and accepting a four-year, $44 million pact with the Cardinals. If the Mets sign Matz, they likely do not trade for Chris Bassitt.

You can never know if Matz would have had a similar season with the Mets, but as a Cardinal he went on the IL twice – once for a shoulder impingement and then for a MCL tear. When he did pitch, it did not go well. He had a 5.25 ERA, motivating the Cardinals to trade for two other lefty starters at the deadline (Jordan Montgomery and Jose Quintana). Matz made the Cardinals’ postseason roster – as a reliever.

What if the Mets had re-signed Javier Baez and Aaron Loup?

When Eppler took over, he learned the team was down the line in talks with both. But he reversed course quickly to the new, new plan which was to invest in Canha, Marte, Eduardo Escobar and Max Scherzer.

Sign up for Inside the Mets by Mike Puma, exclusively on Sports+

Baez signed for six years at $140 million with the Tigers and had a poor season on both sides of the ball. Loup joined Syndergaard with the Angels on a two-year, $17 million deal. Wins Above Replacement is not the best guide for a reliever, but just to demonstrate the before and after – last season with the Mets, Loup had a 2.4 WAR as one of the majors’ most valuable relievers. It was -0.9 this season.

What if the Mets had gone through with the trade for Eric Hosmer, Chris Paddack and Angel Pagan

They were on the verge of saying yes to a deal in which they would give up just Dom Smith and have the Padres pay more than half of the four years at $59 million owed Hosmer.

But the Mets backed out, concerned, in part, about adding even part of Hosmer’s deal and Paddack’s medical. Hosmer was ultimately traded to the Red Sox at the deadline with San Diego assuming nearly the whole contract.

After the Mets stepped away, San Diego pivoted and traded Paddack and Pagan to the Twins. Paddack made five starts before needing Tommy John surgery. Pagan was one of the worst relievers in the majors, allowing 12 homers in 63 innings – a central reason why the Twins fell apart in the AL Central.

Part of the package the Padres received back from Minnesota included reliever Taylor Rogers, who at the deadline was redirected to the Brewers for Josh Hader, who was Melvin’s closer for the wild card series against Showalter’s Mets.

Studies prove that most politicians and experts handled COVID terribly

nypost.com - 7 months ago
During the 2020 election, multiple public health “experts" claimed President Trump had “blood on his hands” and was responsible for “preventable” loss of life.
Read More

nypost.com - 2 years ago
An autopsy was performed and showed no evidence of foul play. An investigation into the tanning salon showed that there were no defects to the tanning bed.
Read More

nypost.com - 2 years ago
Presidential wax figures need a Secret Service detail of their own. Replicas of the last three commanders in chief have been subject to constant vandalism at a San Antonio museum. “When it’s a highly political figure, attacks can be a problem,” Clay
Read More

nypost.com - 1 week ago
They brushed off one bottle of a so-called "blood mixture" — a cure-all drink dating back to the 19the century.
Read More
More News & Articles