Fundraising is the double-edged sword that could make or break Gov. Kathy Hochul's bid for a full term in office.
Author: Zach Williams
Published: 2022-10-07 06:42 pm 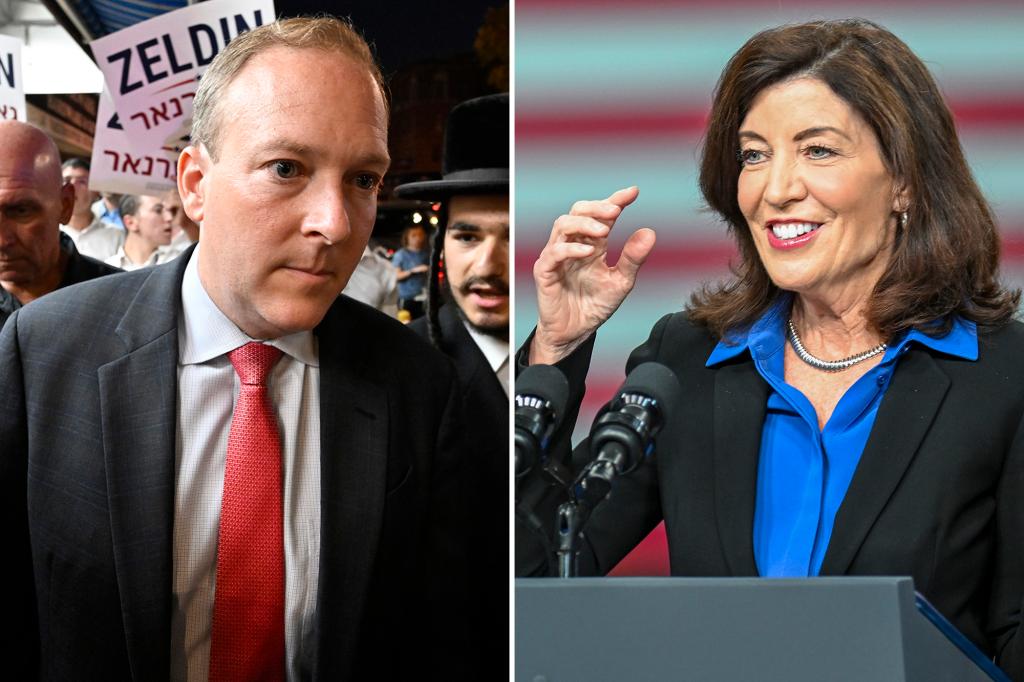 Fundraising is the double-edged sword that could make or break Gov. Kathy Hochul’s bid for a full term in office.

The incumbent Democrat announced Friday that she has raised a record-setting $45.8 million for her campaign – with much of that money coming from donors tied to alleged pay-to-play schemes.

Among those being scrutinized is a no-bid $637 million deal for COVID-19 rapid tests that benefited a company tied to $300,000 in campaign cash to the Democratic governor.

“Some people will view that dollar amount suspiciously, and ask: ‘What promises did she make to raise that kind of cash?” Republican political consultant William O’Reilly said of Hochul’s $45.8 million haul.

“It’s a legitimate question, and one she’ll need to answer,” he added.

The fundraising total and cash spent thus far dwarfs the $31 million spent by the man she replaced, disgraced ex-Gov. Andrew Cuomo, in his successful bid for a third term four years ago.

Hochul has $10.9 million left to spend weeks ahead of the Nov. 8 election – compared to the $6.8 million Cuomo had left for the stretch run in 2018 – against Republican nominee Rep. Lee Zeldin (R-Suffolk), who has yet to release updated numbers Friday afternoon.

“Governor Hochul’s extraordinary fundraising efforts once again show her widespread support and momentum heading into the final stretch of the election,” campaign spokeswoman Jen Goodman crowed in announcing the record one-year haul but a Hochul campaign spokesman did not provide comment on the pay to play allegations.

That money is pummeling Zeldin – who has trailed Hochul in the money game all year – with ads labeling him a rightwing extremist on issues like abortion and gun control while also providing fodder for the Long Island pol to accuse Hochul of corruption.

“She had to sell out access. That’s where the extra many millions of dollars came from,” Zeldin railed at a Friday press conference in the Bronx while blasting Hochul over the rapid testing deal.

Hochul has also faced allegations of preferential treatment to donors, including a real estate developer behind the plan to overhaul the Penn Station area and a Ukrainian-born billionaire with a big financial stake in health care businesses overseen by the state.

The $637 million contract with the New Jersey-based Digital Gadgets has drawn sharper scrutiny because of the timing of campaign gifts by founder Charlie Tebele and people close to him as Hochul positioned the state last fall to buy as many COVID tests as possible.

The Times Union revealed this summer that he hosted a fundraiser for Hochul days before she declared a state of emergency that suspended normal oversight rules on state contracts like the no-bid deal with Digital Gadgets, which the newspaper reported charged the state twice as what California paid a manufacturer for the same test.

His son, James Tebele, began working for her campaign late last year as his family continued giving to Hochul, with Charlie Tebele hosting another fundraiser for Hochul in April weeks before a final payment arrived for the 52 million tests bought by the state, some of which the Times Union reported remain unused.

“I would do that all over again,” Hochul said late last month ahead of Friday’s fundraising filing deadline that will reveal who has given to her campaign in recent months.

Outside groups are aiming to level the playing field for Zeldin against Hochul a bit by airing TV ads on his behalf with the help of deep-pocketed donors like Estée Lauder heir Ronald Lauder.

“Winning has no conscience. Neither does money. Without lots of it, you lose,” political consultant Hank Sheinkopf told The Post Friday.

Zeldin has added millions to his campaign accounts in recent weeks by fundraising alongside political lightning rods like former President Donald Trump who remains popular with the Republican base.

Hochul reported $11.7 million on hand in July compared to $1.57 million for Zeldin in their respective campaign filings.

“Together for the last week-and-a-half our side has been out spending her side,” Zeldin said Friday.

A poll released this week by the Trafalgar Group shows Zeldin behind by just 2 points while other surveys have shown Hochul with leads in the double digits.

Listen to Episode 22 of ‘Marchand and Ourand’: What’s next in NFL TV free-agent frenzy

nypost.com - 9 months ago
Andrew Marchand and John Ourand break down Troy Aikman's move from Fox to ESPN for a record-setting five-year, $90-plus million deal and look at what's next.
Read More

nypost.com - 1 year ago
Milwaukee’s Giannis Antetokounmpo looked in picture-perfect health and played Game 1 of the NBA Finals. And it didn’t matter one bit. The Suns have too many weapons. The stars shined in the Valley of the Sun, and it was mostly the cast on Phoenix. Chris
Read More

Antonio Brown’s $6.6M ‘Scarface-like’ Florida home is something else

nypost.com - 2 years ago
It even has its own synagogue.
Read More