Sunday of NFL Week 11 brought a couple of very serious injuries, as well as some that are hopefully more minor. Headlining the injury report is Bengals quarterback Joe Burrow, who is likely done for the year after sustaining a devastating knee injury. JuJ
Author: Samantha Previte
Published: 2020-11-23 08:42 am 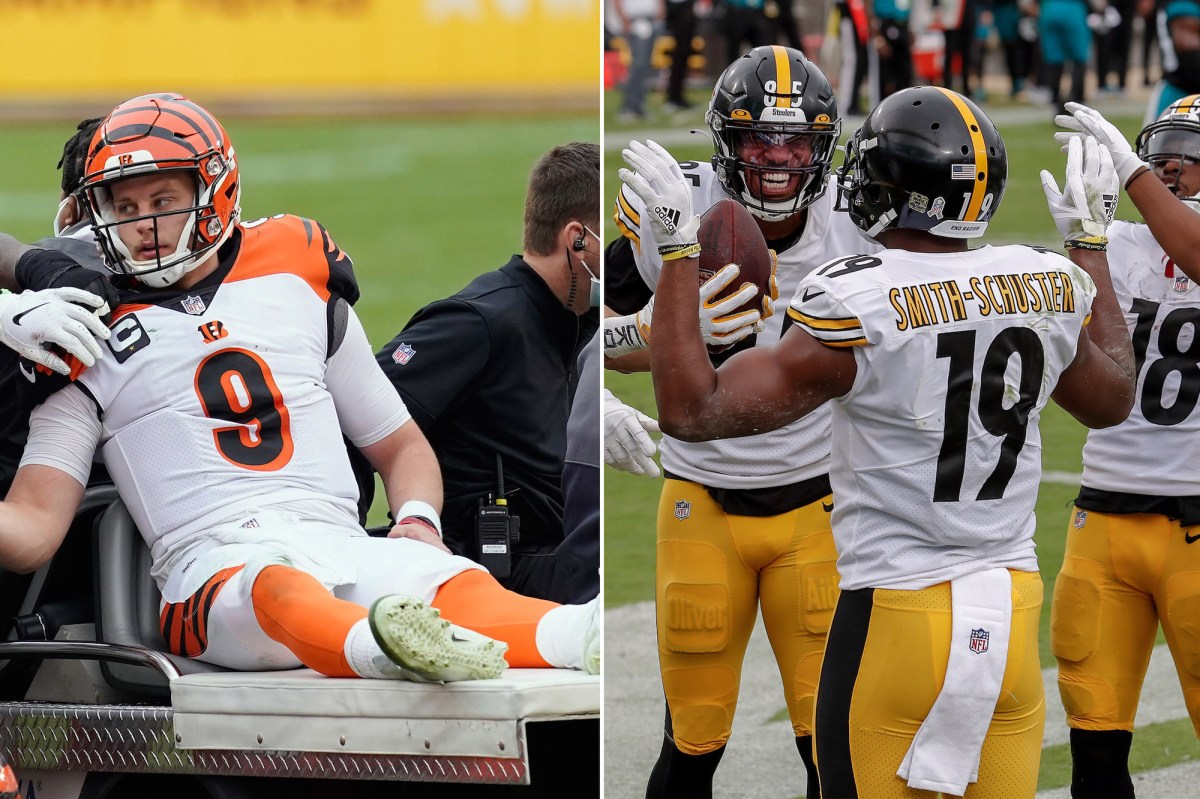 Sunday of NFL Week 11 brought a couple of very serious injuries, as well as some that are hopefully more minor.

Headlining the injury report is Bengals quarterback Joe Burrow, who is likely done for the year after sustaining a devastating knee injury.

JuJu Smith-Schuster, Julio Jones, La’Mical Perine and Rex Burkhead were also hurt on Sunday. Here’s a recap of how it could impact fantasy football:

The 2020 No. 1 overall pick was carted off the field after suffering a left knee injury in the third quarter of Sunday’s matchup against the Washington Football Team which is feared to be a torn ACL. Head coach Zac Taylor did not provide an update after the game, but all signs point to the injury being serious and season-ending.

Burrow himself tweeted after the game, “Thanks for all the love. Can’t get rid of me that easy. See ya next year.”

Before exiting, the LSU product completed 24 of 34 for 203 yards and a touchdown and has accrued 2,688 yards, 13 touchdowns, five interceptions and a 65.3 completion percentage through ten games.

It’s a devastating blow to the Bengals and 23-year-old Burrow, who had been playing at a very high level and had developed strong chemistry with many of the Cincinnati pass catchers. He was replaced by backup Ryan Finley, who went 3-for-10 for 30 yards, zero touchdowns and one interception.

Finley, 25, will replace Burrow for the remaining six games of the season. His presence will be a downgrade for Tee Higgins, Tyler Boyd, A.J. Green and possibly Joe Mixon once he returns.

Smith-Schuster sustained an ankle and toe injury during the second half of Sunday’s game against the Jaguars. The injury occurred after he accidentally stepped on an official’s flag and he did not return to the game. He finished with four catches on five targets for 19 yards behind Diontae Johnson (12-16-111-0) and rookie Chase Claypool (4-8-59-1).

Head coach Mike Tomlin told press after the game he did not consider Smith-Schuster’s injury serious, but he could be hampered by the short week with the Steelers playing on Thanksgiving evening. If he were to miss time, Johnson and Claypool would both be elevated slightly against the Ravens in Week 12.

Jones re-aggravated a hamstring injury during the second quarter of Sunday’s game against the Saints. He caught two of two targets for 39 yards behind Calvin Ridley (5-9-90-0) and Russell Gage (7-12-58-0) in Atlanta’s anemic offensive showing. Jones has already missed two games earlier in the year with a hamstring injury in Weeks 3 and 5.

“Julio, we’ll find out what’s going on more tomorrow,” Falcons interim head coach Raheem Morris said after the game. “But, obviously, he was not able to come back in the game because of the hammy. He did it pretty early, and those guys went out there and battled. We’ve got to see what’s going on with Ju Jones.”

Any prolonged absence for Jones would increase targets for Ridley, Gage and potentially tight end Hayden Hurst, who tallied zero catches this week.

Perine suffered an ankle injury during the second half of Sunday’s game against the Chargers and did not return. The rookie finished with eight carries for 33 yards and a touchdown and was out-carried by 37-year-old Frank Gore, who saw 15 carries for 61 yards and a touchdown and caught two passes for 10 yards. It’s unclear at this time how serious the injury is, but any absence would leave the Jets very lean at running back. Gore would likely have to pick up even more work with Ty Johnson mixed in.

Burkhead sustained a devastating right knee injury during the third quarter of Sunday’s game against the Texans and had to be carted off the field. He finished with four carries for 7 yards and caught two of three targets for 5 yards behind Damien Harris and James White. He will undergo further imaging to determine the severity of the injury, which appeared very serious at the time. His absence will elevate Harris, White and Sony Michel, who was recently activated off injured reserve but was inactive for Week 11.

nypost.com - 3 months ago
The Jets found their new coach. The team reached an agreement in principle with 49ers defensive coordinator Robert Saleh on Thursday night to become the 18th full-time head coach in Jets history. It is a five-year deal, according to a source. Saleh, 41,
Read More

Why Oscar-nominated singer Celeste is a voice you should know

nypost.com - 4 days ago
British chanteuse Celeste started off the year on a high note by releasing her critically acclaimed debut album, “Not Your Muse,” in January. Now the jazzy R&B singer is ready for her Oscar close-up.
Read More

nypost.com - 6 months ago
The Jets’ lack of discipline came to a head Thursday with 11 penalties and six personal fouls. Don’t blame the coaches, middle linebacker Neville Hewitt says. They’ve been emphasizing the need for players to make adjustments every week. “Some of them we
Read More

nypost.com - 7 months ago
A security officer was wounded in a drive-by shooting outside the federal courthouse in Phoenix, according to reports Tuesday. A suspect was later taken into custody and officials don’t believe there’s any “continued threat to public safety,” the FBI said
Read More
More News & Articles