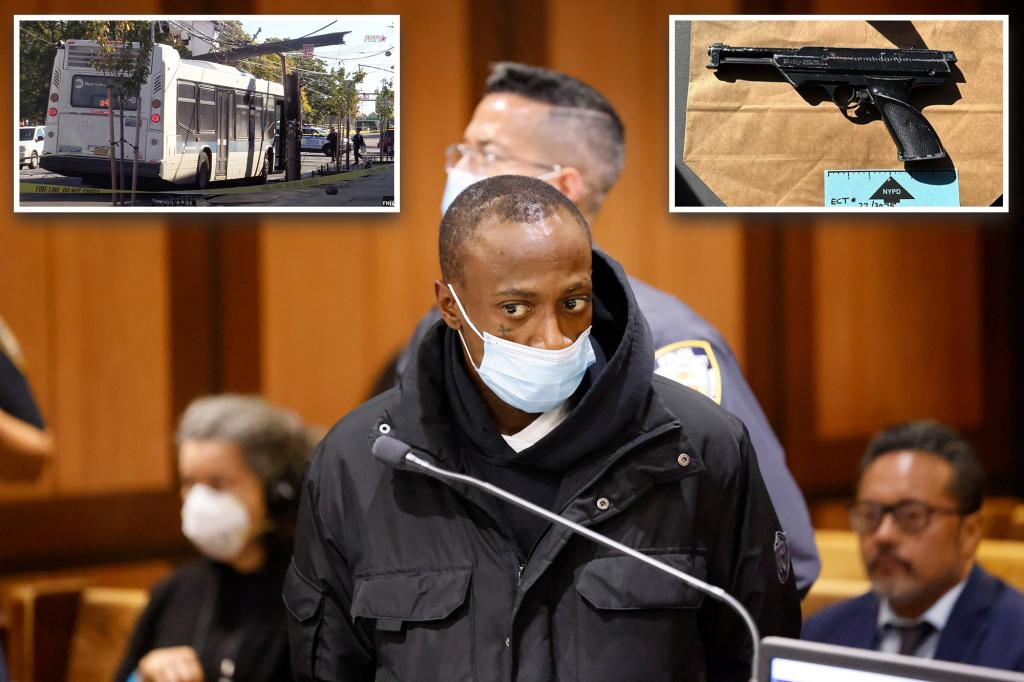 The crazed man accused of hijacking an MTA bus was ordered held on bail Saturday by a stunned judge who said the caper left him “almost speechless.”

Dwayne Gaddy, 44, demanded to get on a Q4 bus on Linden Boulevard on Thursday by brandishing what turned out to be a BB gun and saying, “Let me on the bus. They are trying to kill me,” according to a criminal complaint.

The passengers fled and Gaddy stood by the bus driver for some 14 minutes holding the weapon and telling him people were out to get him, including an elderly pedestrian walking by. The driver jumped out of the bus window and Gaddy took control of the vehicle, crashing it into a utility pole, the complaint says.

He allegedly told the driver he had no reason to be scared, according to the complaint.

But Queens Criminal Court Judge Eugene Guarino said those on the bus had every reason to be terrified.

“I don’t think an average person would know that this was a BB gun by taking a look at it – it’s metal, it’s got markings, it’s been dropped on the ground and looked just like every other handgun I have seen on a daily basis way too often in these cases,” Guarino said during Gaddy’s arraignment Saturday.

“On top of the fact that when Mr. Gaddy first forced way onto this bus, there were 30 people who were just trying to go about their day and that essentially probably had the biggest scare of their lives as they were running off the bus thinking a man with a gun could start shooting.”

Guarino added “in light of everything else that we see on a daily basis in the city and elsewhere, that’s not an unrealistic thing to think anymore. We have gotten to that point in society.”

Gaddy was charged with robbery, assault and unlawful imprisonment among other charges.

Guarino, who noted that Gaddy had prior convictions in Pennsylvania and North Carolina and one in New York, set cash bail at $500,000.

Kenneth Finkelman, Gaddy’s lawyer, said his client, who suffers from schizophrenia, could not afford to make bail.

“He is a good guy who has tried mightily to deal with his mental illness and he has done a pretty good job for the last 11 years,” Finkelman said. “Three weeks ago, unfortunately, he had a mental breakdown and he was actually in a mental hospital for 15 days.”

He said Gaddy is an exterminator and a father of three who lives with girlfriend and he has three children 2, 9, 16.

nypost.com - 6 months ago
The Mariners moneyline is one of three expert picks for tonight's slate.
Read More

Jets vs. Bills: Preview, predictions, what to watch for

nypost.com - 3 months ago
An inside look at Sunday's Jets-Bills Week 9 matchup at MetLife Stadium.
Read More

nypost.com - 8 months ago
Two people were killed and three others severely hurt in a shooting in Goshen, Indiana on Saturday, police said.
Read More

nypost.com - 11 months ago
Aid workers are seeing many kids being sent alone to neighboring countries by desperate parents, and with no one to meet them as they cross the border.
Read More
More News & Articles