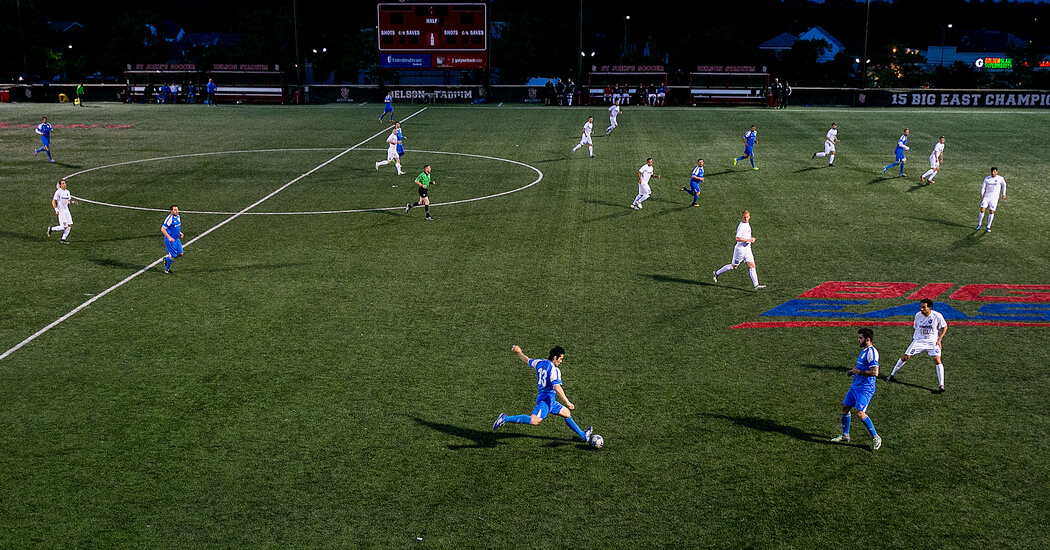 Soccer was once the sport of immigrants in a city of immigrants. Now, it’s everyone’s game. The Cosmopolitan Soccer League, one of the oldest continually operating soccer leagues in the country, began life as the German-American Soccer League in 1923. Some of those teams are still around, joined by more than 100 others of all varieties, such as Astoria United, Manhattan Kickers Football Club, Greek-American Atlas Astoria, Williamsburg International and N.Y.P.D. Finest.

The league — where I’ve been a player and coach for decades — played on through the Great Depression, World War II and the aftermath of the Sept. 11 attacks. The coronavirus pandemic may end that run. The Department of Parks and Recreation, which controls access to most of the city’s soccer fields, has decided that it will not grant field permits for organized play for the fall season, at least not to adult leagues.

On Aug. 28, the department said it would begin to process permits for youth leagues. That’s a good decision; youth leagues should, and do, get priority. The kids are getting a chance to play because their parents — no doubt desperate to get them out of the house — complained loudly to their elected representatives and to the Parks Department about its initial, rash decision on Aug. 19 to close off these public spaces to children.

Adult soccer leagues, on the other hand — as well as lacrosse, softball, baseball and cricket leagues — have been sidelined by a Parks Department bureaucracy that is neglecting newly established safety protocols and ignoring the logistics of playing field sports in a dense city. We’re not the only soccer league affected, either. Others, such as the New York Metropolitan Women’s Soccer League and N.Y.C. Footy, a mixed-gender league, have also lost access. So have some teams in the Long Island Soccer Football League.

The Parks Department commissioner, Mitchell J. Silver, hasn’t had much to say on the matter — he did not respond to my requests for an interview — but the department said in a statement that “adult leagues, many of them for-profit, continue to have access to unpermitted fields for organized play on a first-come-first-served basis.” In other words, working people who rely on organized leagues for scheduled time slots will have to make their way to, say, Randalls Island, and hope there is space for them.

That’s not likely. Running an organized league on unpermitted fields on ad hoc basis is illogical, if not impossible. And potentially unsafe. Inviting unlimited numbers of people to play on a limited number of spaces doesn’t seem like the smartest way to mitigate risk. Yet the Parks Department is essentially allowing play only in uncontrolled conditions.

It’s difficult to understand why New York wants to encourage unsafe play. Across the country, soccer leagues have restarted. In some states, soccer has been labeled a noncontact sport (that’s not the way I play it) and within New York State, soccer has now been reclassified as a “moderate risk” sport, meaning league play can resume.

U.S. Soccer, the sport’s governing body, has published an extensive guide about a safe return to play, and public health authorities have established protocols, such as masks for coaches, substitutes and officials on the sidelines, as well as limiting total attendance to 50 people or to two spectators per player.

Soccer leagues are playing in Westchester and in New Jersey. They’re playing at Sinatra Park in Hoboken, near the entrance to the Lincoln Tunnel — but not at DeWitt Clinton Park on 11th and 54th, on the other side of the Hudson.

The Parks Department seems to think that because some leagues are “for profit” that we’re elitist. Quite the opposite. Our teams represent the diversity of the city. We play in all five boroughs, from Soundview Park in the Bronx to Corporal Thompson Park in Staten Island. Our players are bakers and bankers, construction workers and real estate agents, cops and lawyers, teachers and students, even journalists.

And New York’s soccer leagues are still proudly upholding their heritage as the sport of immigrants. As soon as 11 guys arrive in New York from somewhere new, they form a soccer team. In recent seasons, we’ve added players from Afghanistan and our first Chinese-American team. Our teams proudly celebrate their European, Asian and North, South and Central American heritages. Over the years, I have been cursed at in many, many languages.

Wherever you’re from, you step on the field and everyone has the same status: teammate and competitor. That’s the real beauty of the beautiful game in New York City.

Not having wider access to these fields is also a financial waste. When I first started playing, the pitches in McCarren Park, on Randalls Island and in Red Hook were patches of dirt and rocks with dirty hypodermic needles strewn about. But over the last two decades, the Parks Department, along with civic groups such as the Randalls Island Park Alliance, have replaced these urban smudges with first-rate fields through the magic of artificial turf. Soccer players are also taxpayers and helped fund these fields; why can’t we use them?

In 1919, multiple teams from New York City reached the later rounds of the U.S. Open Cup, then soccer’s national championship. The team from Brooklyn’s Morse Dry Dock reached the semifinals. A war had just ended and the flu pandemic was spreading in New York, but soccer was too important to the community to stop playing.

Today, we have no global war, but we do have a pandemic, and the city’s health authorities are learning each day how to better cope with it. Museums and gyms are now open, with limits. We’re sending our kids back to classrooms. The city needs to get off the bench, so New Yorkers can kick it around just as we’ve been doing for the last century.

Bill Saporito is a contributor to the editorial board and a member of the Cosmopolitan Soccer League.

The Times is committed to publishing a diversity of letters to the editor. We’d like to hear what you think about this or any of our articles. Here are some tips. And here’s our email: letters@nytimes.com.

The Best of ‘This American Life’: 25th Anniversary Episodes

www.nytimes.com - 5 months ago
The show pioneered a new form of audio narrative journalism. Listen to some classics selected by the show’s host, Ira Glass.
Read More

www.nytimes.com - 4 months ago
The Trump administration wants to mandate job reviews for top government scientists and managers every five years, which could lead to reassignment.
Read More

Denmark says it’s permanently stopping use of the AstraZeneca vaccine.

www.nytimes.com - 4 weeks ago
The country hasn’t used it since last month, after concerns arose about a possible rare, dangerous side effect. Officials say they have adequate supplies of other vaccines to use instead.
Read More

The British Museum Reopens to a World That Has Changed

www.nytimes.com - 9 months ago
While it was closed, the museum altered several exhibitions to clarify its links to slavery and colonialism. But not everyone is happy with the changes.
Read More
More News & Articles