Chefs share secrets for a ‘beautifully carved’ bird on Thanksgiving

Thanksgiving turkeys bring people together. They may also raise questions when it comes how you should be carving these holiday birds.
Author: Fox News
Published: 2022-11-24 09:40 am 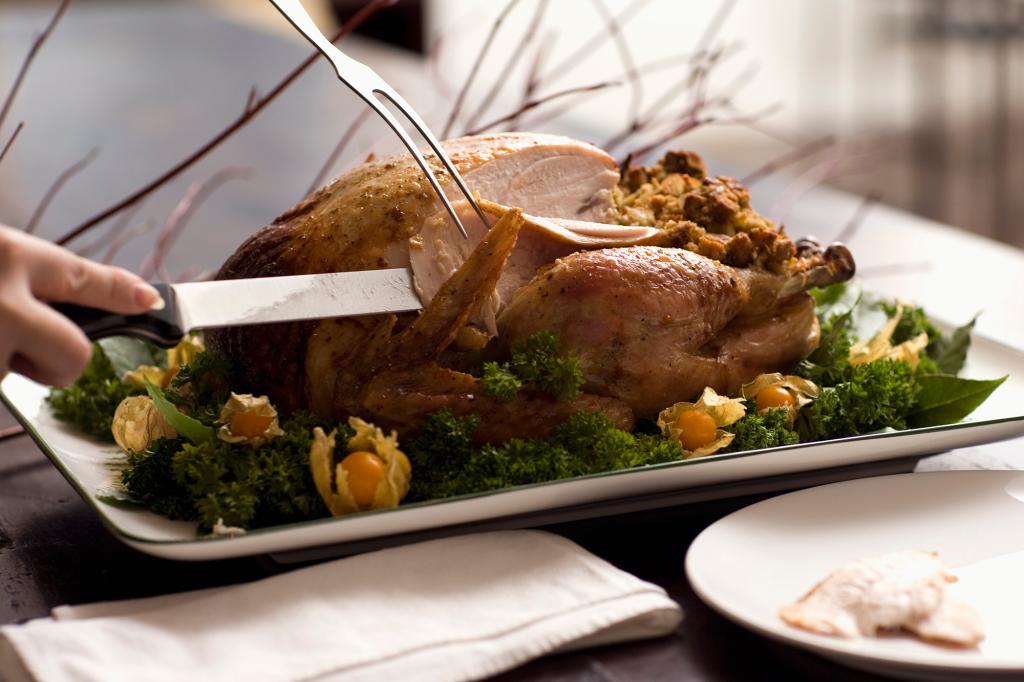 Thanksgiving turkeys bring people together. They may also raise questions when it comes how you should be carving these holiday birds.

Should someone cut down the middle first? What about the legs and wings? How do get the meat out of the turkey’s base?

Chefs have long figured out how to carve whole turkeys for large gatherings. And two have shared their secrets with Fox News Digital.

If you’re an American who will be enjoying one of the approximate 46 million turkeys served in our country on Thanksgiving Day, here’s a quick list of dos and don’ts of carving and an easy step-by-step guide.

Thanksgiving turkeys can be expertly carved if you know the culinary dos and don’ts of carving, according to Chef Bill Hazel, a Germantown, Maryland-based professional cook and owner of Bill’s Grill, a barbecue restaurant he operates in Northwest Indiana and Chicagoland.

Having a sharp carving knife is the first and most important step, according to Hazel.

He recommends sharpening the knife before attempting to carve a turkey.

Dull carving knives are apparently a tool that Thanksgiving hosts should avoid.

“Using a dull knife will tear the turkey up and possibly hurt you in the process if you aren’t careful,” Hazel told Fox News Digital.

When the turkey is ready for serving, Hazel recommends starting a turkey carve with the turkey’s legs.

In his own words, “Carving the legs off first will allow you to have full access to the breast section.”

Hazel warns that Thanksgiving hosts should make sure they’re not carving a turkey “too soon.”

There should be a resting period after a turkey is removed from an oven or roaster, according to Hazel.

“Let the juices sink in and allow, let’s say 30 minutes or so, [before proceeding] to carve,” he said.

A carving knife should be handled with a person’s dominant hand, according to Hazel.

“While using the knife in your dominant hand, ensure you have a long-handled fork to hold the slices together in the opposite hand and cut the turkey into small pieces, so you can get a better hold,” he said.

If seasonings and flavor are a top priority, Hazel says the turkey’s skin shouldn’t be removed.

1. Slice off the legs and thighs

Sanguinetti starts his turkey carve by slicing through the skin that’s between the turkey’s leg and breast.

“Pull back on the leg, laying it flat outward, and push up on the joint from underneath,” Sanguinetti told Fox News Digital. “You may hear a slight pop.”

“At that point, use your knife to cut around the joint and remove the leg and thigh completely,” he continued. “Repeat this process on the other side and set these pieces aside.”

Slicing down on either side of the breastbone using “long strokes” is the second step Sanguinetti does when he’s carving a turkey.

“As your knife hits the bottom, use your thumb to gently pull the breasts outward, continuing to slice down and out until the breast meat is removed,” Sanguinetti said. “If needed, you can slice horizontally at the bottom of the breast from the outside to help remove it.”

The process should be repeated on the other side to carve the entirety of the turkey breast.

Turkey wings are the third section Sanguinetti moves on to when he’s carving a whole turkey.

Gently pull the wings away from the body and slice through the joint to remove it,” he said.

“You can remove the wing tips [because] there’s really no meat here,” Sanguinetti continued. “[But,] they’re great for stocks.”

4. Separate the drumsticks from the thighs

After carving the wings, Sanguinetti returns to the turkey thighs, so he can remove the drumsticks.

When the meat from the topside of the turkey has been fully carved, he flips the turkey over.

5. Remove the bone from the thigh

Sanguinetti uses a knife to slice around the turkey’s thighbone, and he told Fox News Digital he tries to preserve “as much meat as possible.”

6. Slice up the meat

The various pieces of Thanksgiving turkey can be sliced into smaller pieces, according to Sanguinetti.

“There are two things to remember here,” he said. “First, slice against the grain for tender pieces of meat. And second, use a very sharp knife to keep the skin attached to each piece.”

7. Serve the turkey slices right away

Turkey slices “cool quickly” once it has been removed from a whole turkey, Sanguinetti warned.

“Make sure all your Thanksgiving side dishes, salads, sauces, and other goodies are cooked, on the table and ready to be enjoyed,” Sanguinetti said. “Then swoop in with your beautifully carved turkey and wow your guests.”

www.foxnews.com - 2 years ago
Two lineages of a coronavirus variant first detected in California have been classified as “variant[s] of concern” (VOC) at the Centers for Disease Control and Prevention, with the agency citing an estimated 20 percent increased transmissibility over the
Read More

www.foxnews.com - 5 months ago
At least 12 officers were injured in San Francisco when a "hostile crowd" hurled fireworks and glass bottles toward police.
Read More

www.foxnews.com - 2 days ago
The Rolling Stones may want money, but now they are also on money in the United Kingdom!
Read More
More News & Articles