Parents slammed for letting toddler ‘run wild’ on flight: ‘This is why I hate kids’

Wild footage of a tiny tyke terrorizing a packed plane has sparked a heated debate about how the parents should have "handled" the situation.
Author: Rob Bailey-Millado
Published: 2022-11-24 09:20 am 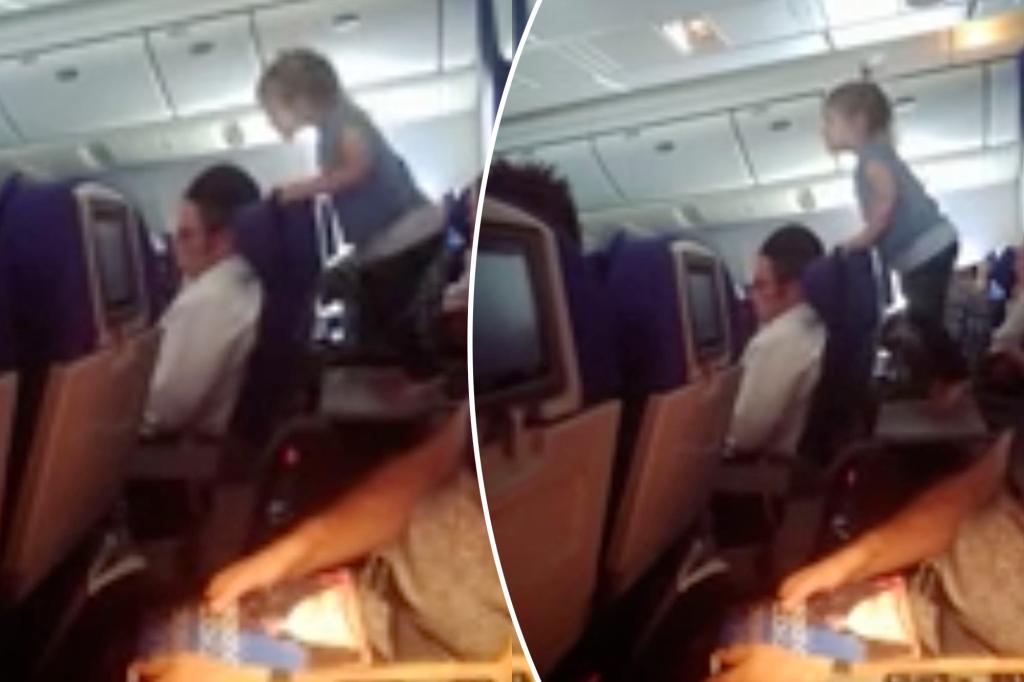 A social media watchdog perhaps summed it up best: “‘My parents would have thrown me off the plane mid-flight.”

Wild footage of a tiny tyke terrorizing a plane full of passengers is racking up millions of views — and sparking a heated debate about how the parents should have “handled” the situation.

The now-viral footage was first posted to Reddit’s popular “Public Freakout” section Wednesday under the title “letting children run wild during an 8-hour flight,” sparking nearly 20,000 “upvotes” and comments such as “this should be an ad for condoms” and “this is why I hate kids, especially this toddler age.”

The kicker shot features the pig-tailed hellion — “believed to be from the US” on a still unidentified airline — energetically jumping up and down on top of a tray table, visibly jarring the male passenger sitting in the seat directly in front of her.

Although he appeared to maintain his patience with the — according to Reddit commenters — “little brat,” outraged viewers did no such thing, dishing up heaps of parenting advice instead.

“I might be awful, but never have I wanted a tray table to catastrophically fail as I did watching that,” one annoyed commenter quipped. “The poor guy in front.”

Another Reddit rabble rouser chimed in: “I would NEVER allow one of my kids to disrupt someone this way. Talking a little loud is one thing. Having your toddler jumping on plane seats while holding onto another person’s (strangers) chair is completely WRONG. I hope that man was reimbursed in some way. The parents probably saw nothing wrong with this. UNACCEPTABLE!!!”

One got straight to the parental point: “I would feel like a failed parent if my kids were doing this and I was just straight up allowing it,” while others were more considered with in-flight sanitation standards: “The bouncing is obviously infuriating but also the bare feet on the tray table … Always wipe down your stations folks.”

Meanwhile, some social media justice warriors attempted to blame the ruckus on the airplane’s flight crew: “Shouldn’t the flight attendants have intervened?” one commenter queried. “If so, I hope that passenger got some compensation from the airline.”

Ironically, one airline attendant went viral this week by revealing whom she and her colleagues consider the “most hated passengers” on flights: And it’s not disruptive kids.

In fact, it’s often the frustrated folks who complain about said misbehaving kids who put the “ass” in “passenger,” according to Kat Kalamani, a six-year veteran of the friendly skies.

Amid nonstop stories about nightmare airplane passengers, this former US flight attendant is clearing the air on which flyers are the most annoying — which, contrary to popular belief, are not crying babies. Indeed, the passengers that irritate the cabin crew the most are the people who complain about crying babies, she claimed in a clip with nearly 2 million views.

“I promise you, there’s nothing that irritates us more as a flight attendant [than] when people complain about babies crying,” said Kalamani. Accompanying footage shows an angry looking “Karen” on an undisclosed flight shushing a baby that’s throwing a tantrum off screen.

While these passengers may see themselves as heroes of the flight, they’re actually annoying both staff and fellow travelers, per The Post’s previous coverage of her clip.

nypost.com - 9 months ago
The mental struggle in this game is real — regardless of how good you are.
Read More

nypost.com - 2 years ago
​Rep. Kevin McCarthy, the Republican leader in the House, on Sunday defended former President Trump’s response to the Jan. 6 Capitol riot in a tense interview on Fox News. “I was the first person to contact him when the riot was going on. He didn’t see it
Read More

‘A head with legs and colors’: This creature in lead to be NY ‘I Voted’ sticker

nypost.com - 5 months ago
The “I Voted” sticker is getting a makeover in upstate New York – and a spider-like psychedelic critter is squirming its way to victory.
Read More

nypost.com - 2 years ago
The man who beat an Asian woman to the ground then kicked her in the head in a brutal, caught-on-camera hate attack in Midtown earlier this week was arrested by police early Wednesday morning, cops said. Brandon Elliot, 38, was arrested at about 2 a.m.
Read More
More News & Articles