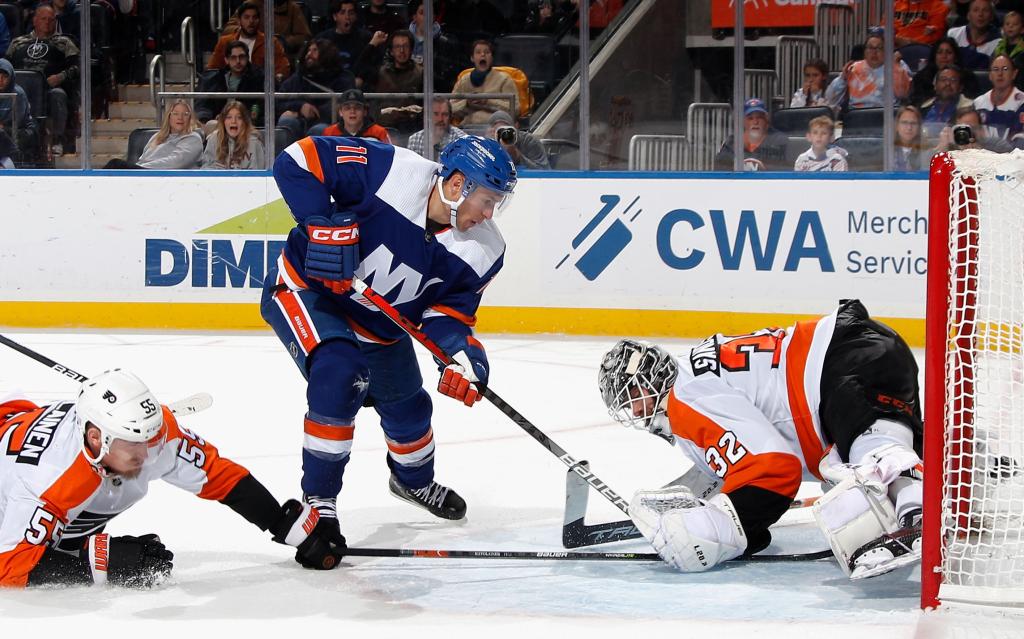 The Islanders and Flyers both were on the second end of a back-to-back Saturday evening, and it was easy to tell. But in the end, it was the Islanders who dug deep in the third period, pulling out a win on a flurry of goals early in the final 20 minutes.

The 5-2 victory was the fourth straight for the Isles, who are 15-8-0, sitting pretty in second place in the Metropolitan Division. They have another game against the same team on Tuesday, this one in Philadelphia, with a chance to extend the win streak to five.

On this Saturday a year ago, general manager Lou Lamoriello was giving a downtrodden press conference about his team getting shut down for COVID-19. This year’s Islanders, though, are right where many thought they’d be a year ago: dispatching teams like the Flyers, playing workmanlike hockey and banking points for the playoff race.

Brock Nelson put the Isles ahead for good just under three minutes into the third period, sniping the puck past Felix Sandstrom off a Ryan Pulock feed to break a 2-2 tie.

Before Nelson’s goal was announced in UBS Arena, Anthony Beauvillier had scored again, all of 22 seconds later, to make it 4-2, with another primary assist from Pulock.

The Flyers, who had played the Islanders tight through the opening 40 minutes, were promptly stonewalled by Semyon Varlamov, who finished with 25 stops, in their attempts to get back into the game. Parise provided the finishing blow, a well-placed wrist shot finding its way under the bar for a power play goal at 11:57 and giving Pulock a fourth assist on the night.

From there, the drama came in the form of a brawl with just over three minutes to go, sparked by Nicolas Deslauriers jumping Alexander Romanov following a Romanov hit. That resulted in Deslauriers and Scott Mayfield given game misconducts, and in Oliver Wahlstrom getting a hearty tribute from UBS Arena for winning a fight against Tony DeAngelo handily.

The Islanders, who have struggled with slow starts this season, had no such issue Saturday. They ran roughshod over the Flyers for the game’s first five minutes, with Adam Pelech scoring on a one-timer from between the left hashes at 4:33 to punctuate the onslaught. The momentum wouldn’t last the duration of the period, though, and the Flyers got one back on Lukas Sedlak’s goal at 15:27.

The Flyers took the lead at 9:28 of the second after Joel Farabee banged in a rebound from Kevin Hayes, but the Islanders would tie it before the second intermission, with Parise scoring on a backhand at the tail end of a power play he earned by taking a cross-check from Ivan Provorov, sending him tumbling into the Philadelphia net.

Doubtless, Parise will take that trade every time. Especially when it comes with two points.

The Islanders and the undermanned Flyers alike didn’t have their best. This was a low-event grind of a hockey game. The first five minutes, in fact, were when the Islanders played their most convincing hockey until the dam broke in the third.

Still, they came away with two more points in their pocket — and that is what matters.

Taking advantage of this stretch will be vital, and the Islanders are getting the job done right now. If they were stealing points a few weeks ago with their flurry of comebacks, then that is no longer the case.

NYC punch victim, 87: ‘You can’t even go to the supermarket these days’

nypost.com - 2 years ago
Carmela Garcea, an 87-year-old shopper, was sucker-punched by a woman after she exited a Morton Williams grocery in Gramercy, cops and witnesses said.
Read More

De Blasio insists NYC is better off after his 8 years

nypost.com - 1 year ago
Mayor Bill de Blasio is insisting that New York City is better off now after his eight years at the helm.
Read More

nypost.com - 1 year ago
Oh, snap! Addison Rae may have been temporarily banned from TikTok, but fans will soon be seeing far more of her on Snapchat. The superstar influencer, 21, has inked a deal with the social media company to star in her own unscripted series, “Addison Goes
Read More

nypost.com - 3 months ago
It is the miracle of cosmic birth.
Read More
More News & Articles