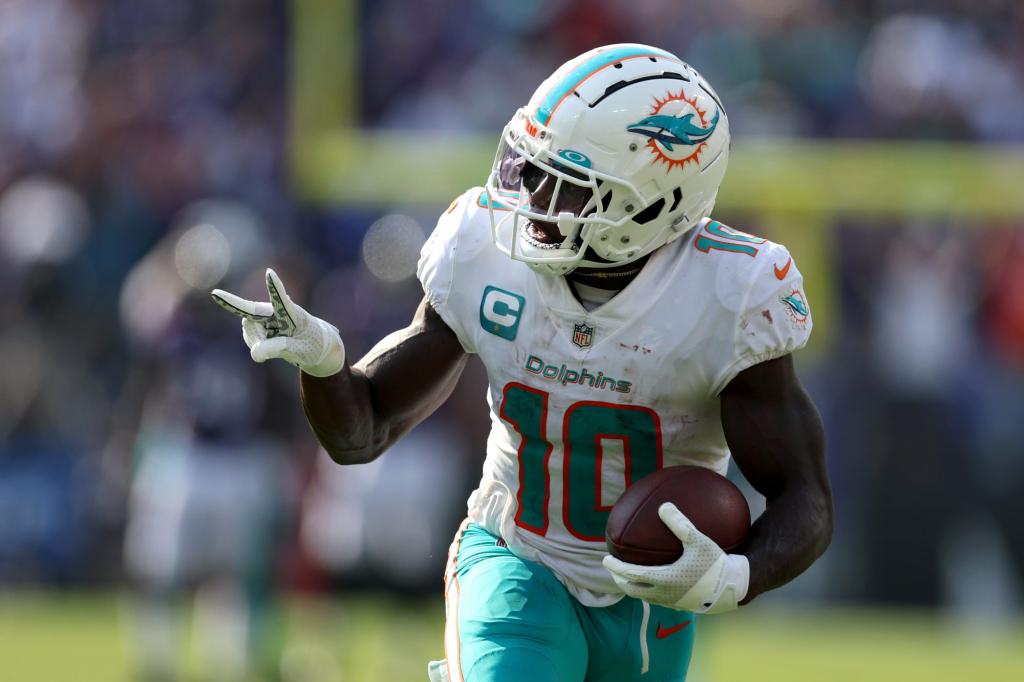 Week 12 NFL betting couldn’t have started much better for anytime touchdown scorer bet predictions. All three games went over the projected total, and two of the three were extremely competitive games that came down to the final possessions.

Let’s hope for more points on a glorious Sunday afternoon as we target some of the league’s best talent in plus-matchups in Week 12. Followers of our Post Picks newsletter have enjoyed some really solid results on anytime touchdown picks. We’ve hit three in a row: Cordarrelle Patterson last Sunday, Brandon Aiyuk on “Monday Night Football” and Dalton Schultz on Thanksgiving Day. The heater has been real – let’s keep it going.

Below we give three best bets for anytime touchdown scorers in Week 12’s Sunday slate.

There aren’t many guarantees in football or life, but Tyreek Hill is one of them. In a race for Offensive Player of the Year with Justin Jefferson (who put on a show on Thanksgiving against a tough Patriots defense), Hill will look to stake his claim this weekend with a big-time performance against a minor league team.

Save time and money with the latest deals, discounts, trends, reviews and more.

Over the last four weeks, the Texans are allowing the most yards per target to opposing receivers (9.57) – teams are attacking them deep. Hill is the best at this in football, so target his overs this weekend along with the TD prop in what could easily be a massive game.

In only 10 games, the Tennessee Titans have allowed 18 touchdowns through the air, tied for the third-most in the NFL. The Titans are vulnerable against the slot, allowing the 7th-most fantasy points per game to slot receivers.

82% of Boyd’s snaps are in the slot so expect him to match up with Titans nickel corner, Roger McCreary. McCreary has given up three touchdowns in coverage, 17th most among 202 qualified cornerbacks. This is a nice spot to target for the pass-happy Bengals.

Betting on the NFL?

We don’t truly know how the change from Zach Wilson to Mike White will impact the Jets’ fortunes at receiver. Could Elijah Moore be more involved? It’s possible. But let’s take into account that White loves to check down.

White targeted Michael Carter 14 times against the Bengals in their wild October 31st win. Wilson is actually a perfect dump-down target for the receivers. His average depth of target (aDOT) is 7.9 yards, which is behind Corey Davis, Elijah Moore and Denzel Mims. The matchup against the Bears defense is excellent; Chicago’s secondary of Kindle Vildor, Kyler Gordon and Jaylon Johnson is quite leaky. In general, it’d be wise to target Jets props this weekend as the sportsbooks begin to drop them.

nypost.com - 12 months ago
About a dozen current and former staffers have shared accusations of intimidation, racism and abuse under the leadership of Phil McGraw and co-executive producer Carla Pennington.
Read More

nypost.com - 10 months ago
The First Family, the couple, and their parents are still in the planning stages of all of the wedding festivities, shared Jill Biden's communications director.
Read More

US hit by deadliest week since start of COVID-19 crisis

nypost.com - 2 years ago
The United States saw its deadliest week since the start of the COVID-19 pandemic — with a 44 percent rise in fatalities compared to the week prior, according to new data. A total of 15,966 Americans died from the coronavirus in the seven-day period
Read More