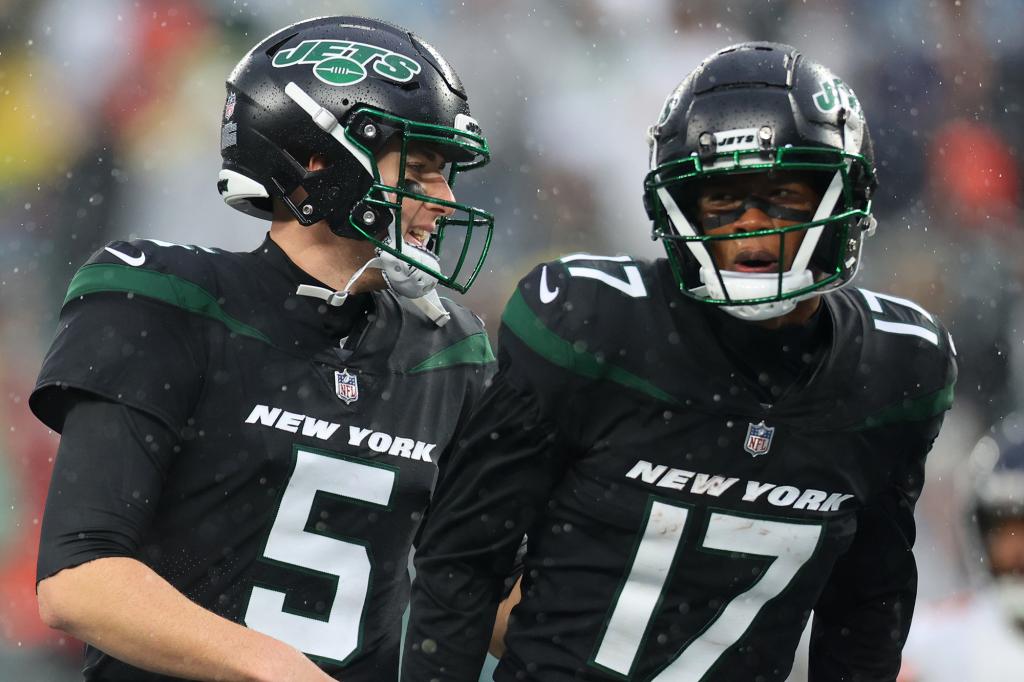 What can you get for 17 quarters? Maybe a gallon of gas? A coffee or a donut, but not both? Seventeen individual gumballs?

You know what you can’t get? Almost anything else, including an accurate assessment of the long-term reliability of Jets quarterback Mike White.

Gang Green benched struggling “franchise” QB Zach Wilson this past week in favor of the more veteran White. Wilson, in his two-year career, has played roughly 77 quarters of NFL action. White, after Sunday, now has 17.

So we have a much better database on which to judge Wilson than we do White. And it isn’t good for Wilson — averaging 187 passing yards, 0.7 touchdowns and 0.8 interceptions per game. It is a better for White — 298 passing yards, 1.9 TDs and 1.9 INTs on average.

So for fantasy purposes, White is a step above Wilson, but that doesn’t make White a solid fantasy option. He is still pedestrian at best — even in an off QB season.

What White does do is boost the entire Jets offense. In four career starts by White, the game average is 28 points per game. In 20 games with Wilson starting, they average 18. Even with Joe Flacco starting, they still average 17.25 per game, right on par with Wilson.

Joe Flacco, who at his best has approached the room of “elite” QBs but never crossed through the door — the worst version of him is basically as good as Wilson. But it’s not like you’re playing, or even rostering, any of these QBs. Your fantasy interests are in how they impact other skill players.

We saw Garrett Wilson have a big Week 2 with Flacco and a monster Week 12 with White. In four games without Zach, Garrett has topped double digits in PPR three times. In seven games with Zach, he reached double digits just twice.

Elijah Moore was just OK with Flacco — averaging 8.4 in PPR over three games. Moore got 14.0 Sunday, despite just two targets. But that is yards better than the six games he played with Zach — when he averaged 2.4 and delivered a trade request.

Tight end Tyler Conklin had three double-digit games with Flacco and an “OK” 8.0 Sunday with White. Outside of a two-TD anomaly versus the Patriots in Week 8, he averaged 3.2.

The bump Garrett gets moves him from the back end of your fantasy bench to a strong weekly Flex option or decent WR2. Moore inches back on the radar, but more for DFS purposes than seasonal consideration. And at a shallow tight end position, Conklin is a back-end option with the potential to rise a couple of notches.

One area that doesn’t fare as well is the running game — 102.25 yards per game without Wilson, 126.6 with. Now Michael Carter is dealing with an ankle issue, James Robinson no guarantee to be active, Ty Johnson a career JAG and rookie Zonovan Knight an unknown. You can stash one of these guys, but you can’t play them with any confidence.

nypost.com - 2 years ago
Sifting through this week’s explosive lawsuit against Leon Black by an ex-Russian model, there may be a bright spot for Black: The case isn’t likely to dig up any dirt about the billionaire’s alleged ties with Jeffrey Epstein. That’s because the defamatio
Read More

nypost.com - 2 years ago
Amazon’s landmark victory over a closely watched effort to unionize a warehouse in Alabama could be overturned amid accusations that the e-tailing giant used illegal intimidation tactics to sway employee votes, according to a US regulator. All but one of
Read More

Biden ripped after blaming Republicans for US economic troubles