2022 National Geographic pictures of the year 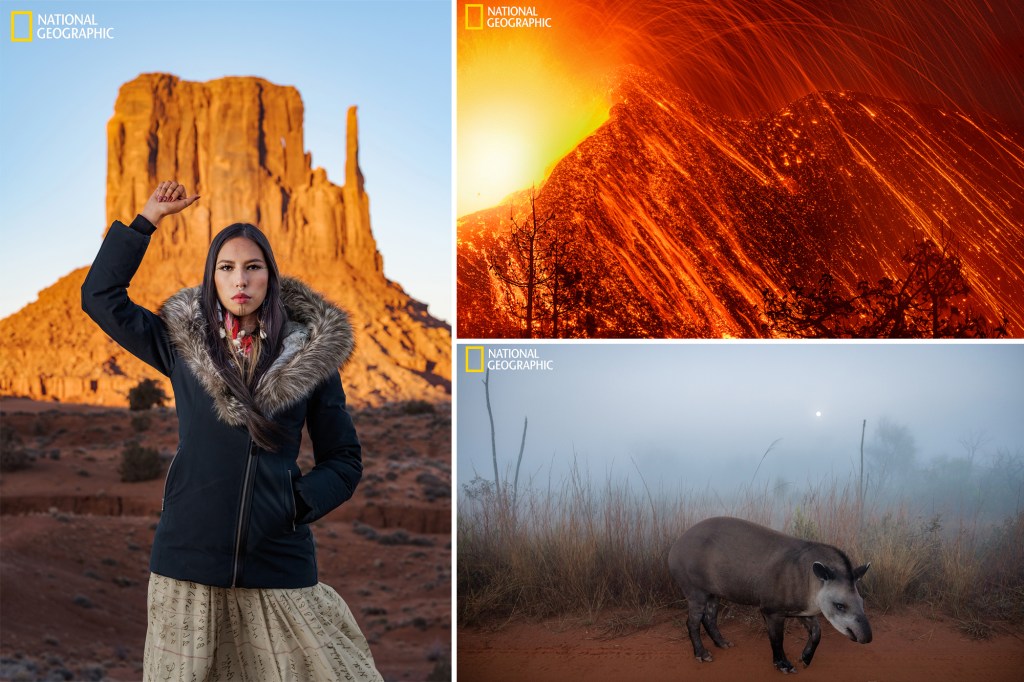 A SpaceX Falcon 9 rocket, launched from Cape Canaveral in the early hours of June 19, streaks above a stand of bald cypress trees.

Under a harvest moon on a hazy morning in Brazil's Emas National Park, a lowland tapir known to park staff as Preciosa ambles down a road.

A rat tries to rescue a trapped comrade at Tel Aviv University.

Madeira's laurel forests spring from a mountainous Portuguese archipelago in the North Atlantic west of Africa.

Photographed at night with an infrared camera, a spotted hyena that scientists nicknamed Palazzo submissively grins and lays her ears back as Moulin Rouge, the clan's dominant female at the time, towers over her. Palazzo's cub peers out from between them.

A small refinery on the roof of a laboratory at ETH Zurich pulls carbon dioxide and water directly from the air and feeds them into a reactor that concentrates solar radiation, generating extreme heat. That splits the molecules, creating a mixture that ultimately can be processed into kerosene or methanol.

Manatees (above right) adorn a convenience store's mural in Crystal River, a coastal city in western Florida known as the Manatee Capital of the World.

An elephant gathers the fruit of a Detarium macrocarpum tree off the forest floor in Gabon's Lopé National Park.

Ukrainian refugee Ludmyla Kuchebko, 72, in the Polish town of Przemyśl near the border.

To create this image of Bears Ears, Stephen Wilkes took 2,092 photos over 36 hours, combining 44 of them to show a sunrise, a full moon, and a rare alignment of four planets.

With winged arms in a protective spread, this relief of the Egyptian goddess Isis has stood guard for millennia on the stone sarcophagus of the pharaoh Tutankhamun.

Around Vostok and other southern Line Islands, in the remote central Pacific, abundant small reef fish support a thriving population of top predators.

When cracks opened up in the Cumbre Vieja ridge in September 2021, they set off one of the most destructive volcanic eruptions in the Canary Islands in 500 years.

With its Artemis I mission, NASA is kicking off an ambitious plan to return humans to the moon. For the scheduled launch, this uncrewed trip's commander would be the "moonikin" Campos.

For a peso (less than two cents), internet vending machines bring the boundless digital world to Filipinos for a few minutes in a Manila neighborhood.

Unathi Madalane (at left) and Tshiamo Maretela enjoy the beach in Durban.

Captured via drone, caribou from the Western Arctic herd gallop across a valley near the small town of Ambler during their spring migration.

Wild Asian elephants mingle with cattle at a garbage dump near Minneriya, in central Sri Lanka.

At sunset on April 27, Evan Green caught climber Thomas Moore walking amid the tents pitched at Camp I framed by Everest (at left), Lhotse (center), and Nuptse (at right).

Viktor, a 39-year-old male bonobo, resides in Texas at the Fort Worth Zoo, where he's known for interacting with visitors.

Quannah Rose Chasinghorse uses her visibility to advocate for concerns of Indigenous peoples.

Blue-and-yellow macaws perch on a rooftop in Caracas, waiting to be fed by locals.

A long camera exposure blurs the crowd of tourists inside the Lincoln Memorial in Washington, D.C.

Oksana Hapbarova (at left), 18, says that she and her mother (also named Oksana, 39), waited out Russian attacks in a Kyiv bomb shelter. "For six days in the shelter, I couldn't sleep, because I was scared I would never wake up," says the younger Hapbarova.

It's tempting to think of ceramics as strong yet brittle, like a coffee cup shattered on a kitchen floor. But to scientists at U.S.-based glass and ceramics manufacturer Corning, they're flexible and durable.

Five weeks into the journey of the National Geographic expedition ship Polar Sun, photographer Renan Ozturk found himself exploring a bay off the coast of Greenland.

nypost.com - 2 years ago
The lawsuit is one of many filed on behalf of thousands of women who claim J&J’s talc-based products like baby powder contributed to their ovarian cancer.
Read More

nypost.com - 2 months ago
Police have launched a homicide investigation after a 47-year-old woman was found dead in a Miami Beach hotel that caters to flight crews – and the door to her room was blocked by a mattress. The victim, identified by relatives as Marelbi Ruiz Lara, was
Read More

nypost.com - 6 months ago
The 66-year-old controversial filmmaker reportedly will keep working despite his diagnosis.
Read More

nypost.com - 2 years ago
A leading gay-rights group that has praised Tesla’s treatment of its LGBTQ employees wants Elon Musk to apologize for mocking people who display their gender pronouns in their online bios. The Human Rights Campaign reportedly weighed in on Musk’s latest
Read More
More News & Articles