Flossie named world’s oldest cat: ‘I knew from the start she was special’ 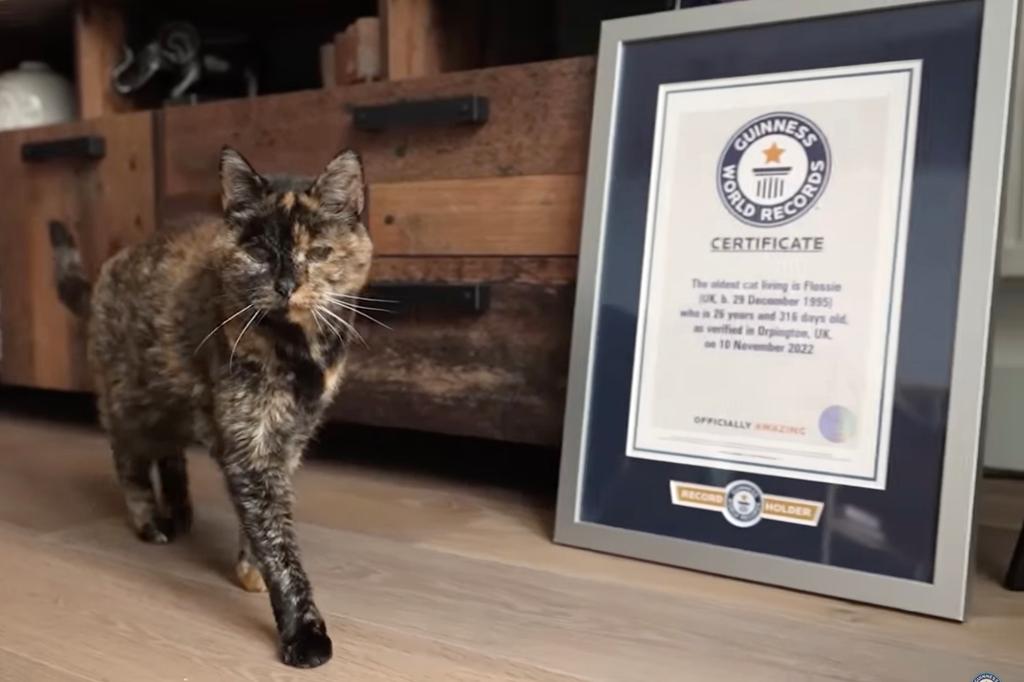 This kitty’s got nine lives — and counting.

A nearly 27-year-old cat named Flossie in the UK has officially been confirmed as the world’s oldest living cat, says Guinness World Records.

Rescued as a stray kitten, the senior feline was reportedly born Dec. 29, 1995 — and officially received the award at 26 years and 316 days.

Flossie is the human equivalent of 120 years old, according to a press release, and despite having poor vision and hearing, her owner, Vicki Green, says she’s in good health and still behaves like a kitten.

“I knew from the start that Flossie was a special cat, but I didn’t imagine I’d share my home with a world record holder,” Green said in a statement.

Green adopted Flossie this past August, during her more “mature years,” after being handed to a UK-based charity, Cats Protection.

“She’s so affectionate and playful, especially sweet when you remember how old she is,” she added. “I’m immensely proud that Cats Protection matched me with such an amazing cat.”

The spritely old cat has lived in several different homes since she was first found near a hospital in 1995, and adopted by a health care worker. Flossie remained with her first guardian for 10 years, until they passed away — at which point she was taken in by her first owner’s sister.

Flossie stayed with her second parent for 14 years until they, too, passed away — prompting their son to step up as caretaker for thee years. Then, she landed in the hands of the animal welfare group.

“We were flabbergasted when we saw that Flossie’s vet records showed her to be [around] 27 years old,” said Naomi Rosling, branch coordinator at Cats Protection.

Green has now done all she can to make Flossie feel welcome and loved in her pet’s — presumably — final days.

“I feel like I’m not sharing my home with the oldest cat. I feel like this is her home and I’m encroaching on her space,” Green told Guinness.

“She’s a very nice roommate and we get on very well,” she added. “I don’t feel like I’m living with a senior.”

nypost.com - 2 years ago
​Twitter has admitted it made a mistake in censoring photos of migrants sleeping on the floor at a government detention center in Texas, according to a report. James O’Keefe, the founder of Project Veritas, posted a video on Twitter Monday showing picture
Read More

Ben Simmons still far away from playing for Nets: ‘Not ready for even one-on-one’

nypost.com - 11 months ago
Ben Simmons wasn’t ready for full team work on Saturday, as the Nets had initially anticipated. And it sounds as if it could be a while until he is. While Nets general manager Sean Marks said on March 3 he hoped his prized new acquisition could be taking
Read More

nypost.com - 4 months ago
The Warriors are considering disciplinary action against Draymond Green for his role in a physical altercation during practice, per The Athletic.
Read More

nypost.com - 1 year ago
The Giants, a 10-point underdog, will cover against the Chiefs on Monday night.
Read More
More News & Articles