Senate takes up railroad legislation to prevent a strike 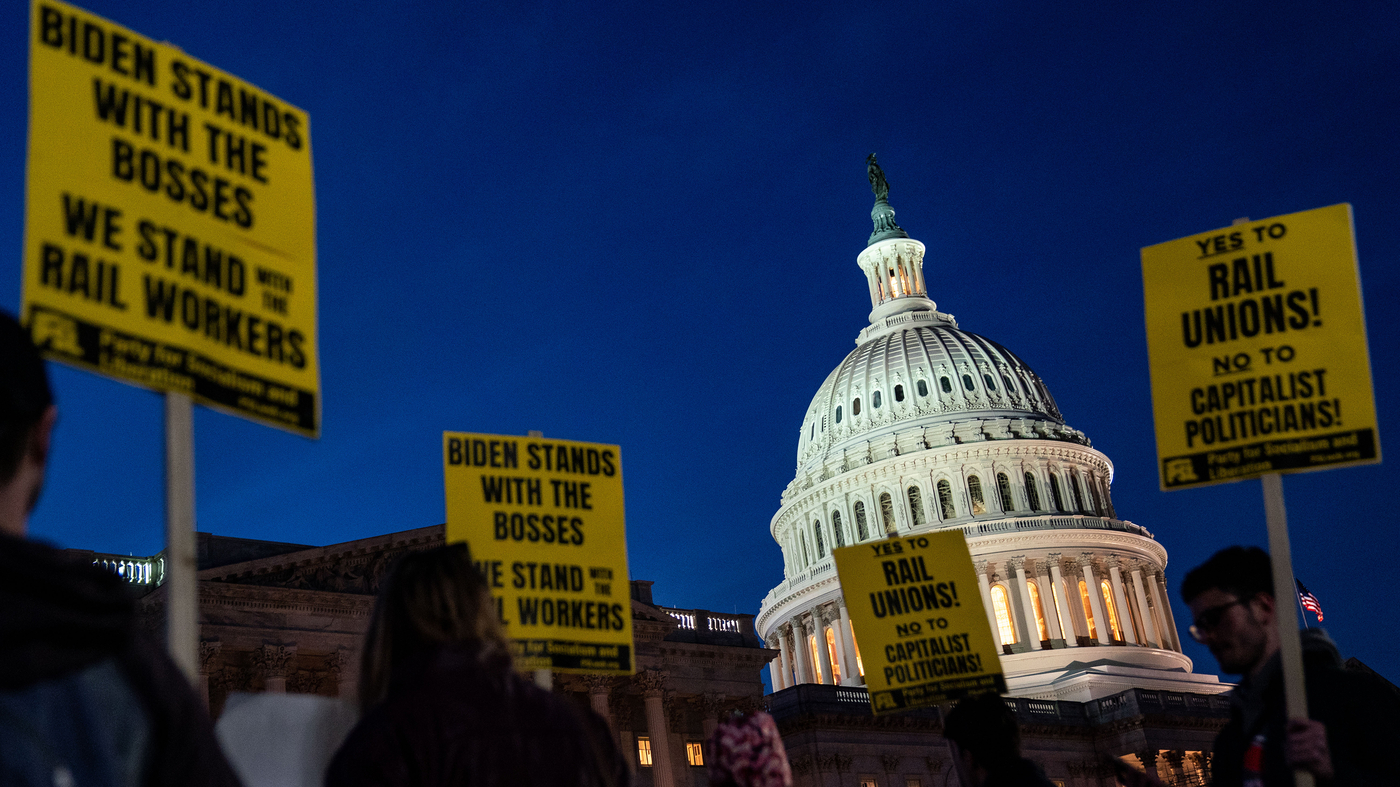 The Senate is voting on a legislative path forward designed to avert a railroad strike in eight days, and has rejected a measure that would provide workers with seven days of paid sick leave.

The measure to offer paid sick leave was rejected 52-43. The measure required a 60 votes to clear the Senate.

Senators will now vote on the contract agreement negotiated by the Biden administration — without making any changes.

The chamber took up two House-passed measures on Thursday afternoon: a resolution that would force unions to accept a tentative agreement reached earlier this year between railroad managers and their workers and make an imminent strike illegal. And it also voted on a resolution that would have provided seven days of paid sick leave to railroad workers. The sick leave effort was meant to ease concerns from labor unions and some lawmakers, despite Biden's request not to alter the carefully negotiated underlying deal.

If the measure to enforce the tentative agreement passes, it means that workers will be left without the paid sick days they have been asking for.

Advocates have been asking for a paid sick leave policy to be put in the contract for months. The deal negotiated by the Biden administration did not include this, causing some unions to reject it — creating the threat of a rail worker strike as soon as December 9.

Some senators like GOP Sens. Marco Rubio, Josh Hawley and Ted Cruz have come out strongly against any measure that doesn't include more paid sick days for workers.

"I think the labor bosses and the Biden administration screwed over workers, cutting a deal they don't support," Rubio said. "I don't think Congress should be in a position of having to negotiate labor deals, but, if we're forced to do so, then I'll only support one that at least nods toward what workers' priorities are, so we'll see how it plays out."

They were joined by progressives.

In a joint statement issued after the House vote, a dozen Democratic senators urged the Senate leadership to take up both House-passed bills to support the workers.

"Congress can and must make this agreement better," they said in the statement. "For nearly three years our nation's rail workers have been fighting on the front lines of the pandemic. They have kept our trains on the track even while facing unprecedented challenges."

Senate Democrats were joined by Labor Secretary Marty Walsh and Transportation Secretary Pete Buttigieg on Thursday. Walsh told reporters that final deal was up to the Senate and more time between railroads and unions was not going to help. Lawmakers had mulled over a third option: extending the cooling off period 90 days to give railroad managers and workers more time to negotiate at the bargaining table. But this effort failed 26-69.

Any of the legislative efforts require 60 votes.

Earlier on Thursday, House Speaker Nancy Pelosi threw cold water on the possibility of getting 60 votes in the Senate to support seven days of paid sick leave.

During a joint press conference with French President Emmanuel Macron, Biden was asked about the pending railroad strike in the U.S.

Biden defended the deal – even though it doesn't include the additional paid sick leave for rail workers.

"What was negotiated was so much better than anything they ever had," Biden said, adding that a strike would cost 750,000 jobs and send the U.S. into a recession.

He insisted the White House will renew its push for paid leave for all workers in all industries after Congress passes this draft deal. Biden has asked for the bill by Saturday, according to the White House.

Railroads handle the transportation of 30-40% of all goods, but take on the lion's share of products like ethanol, fertilizer and grains. Railroad managers warn that with a strike, there are few other options given ongoing trucking shortages and the risk of backlogging ports.

"For us, the strike effectively starts this weekend," said Corey Rosenbusch, president of the Fertilizer Institute on a call with reporters. "Rail carriers have already notified that ammonia shipments will need to be pulled off of the network starting about five days before, which would be Dec. 4. So many of the fertilizer companies are already preparing for that reality."

With help from Juma Sei and Katherine Swartz

Mexico To Release Potentially Thousands Of Prisoners From Federal Custody

www.npr.org - 1 year ago
Mexico's president has ordered the release of potentially thousands of prisoners from federal custody. Among the reasons for the early release is that some prisoners were tortured.
Read More

Trevor Reed came back home, but Paul Whelan is still imprisoned in Russia

www.npr.org - 9 months ago
NPR's Rob Schmitz talks with David Whelan about his feelings about the release of Trevor Reese, while his brother Paul remains in a Russian prison on espionage charges.
Read More

www.npr.org - 6 months ago
The assassination, allegedly motivated by a grudge Abe's suspected killer held against the Unification Church, has put the relationship between Japan and the church under a new spotlight. (Image credit: Hiro Komae/AP)
Read More
More News & Articles