A judge said he would rule in the coming weeks on whether Florida Gov. Ron DeSantis unlawfully suspended a state prosecutor who supported criminal justice reform.
Author:
Published: 2022-12-02 01:46 pm 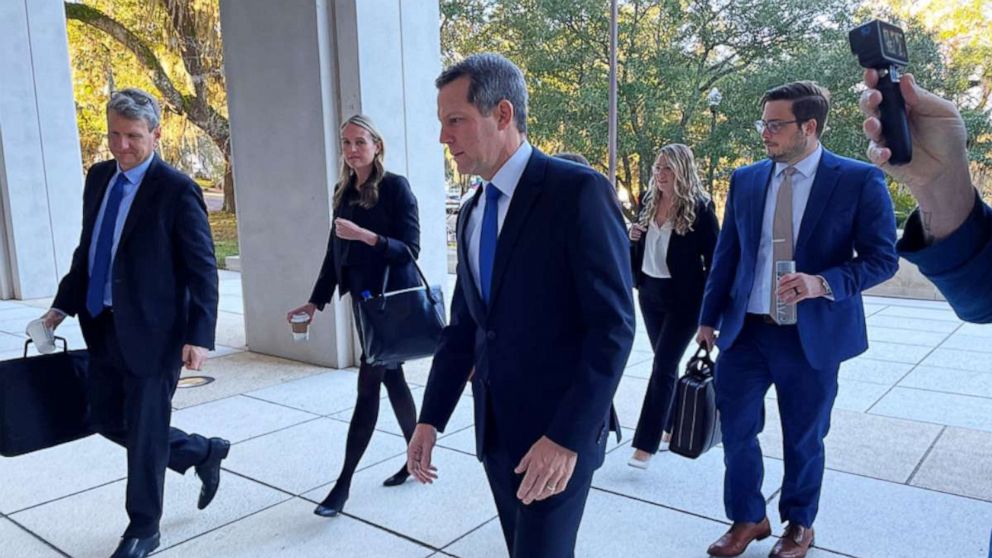 A federal judge on Thursday pressed attorneys for Republican Florida governor Ron DeSantis to explain why the governor's recent suspension of a state prosecutor he viewed as "woke" wasn't an unlawful and politically motivated overreach of executive authority.

U.S. District Judge Robert Hinkle said he would rule in the coming weeks on whether the governor was within his rights to suspend Andrew Warren, a Democrat who was reelected last year as the top state prosecutor in Tampa and surrounding Hillsborough County after running on a platform of criminal justice reform.

"This whole thing is chock-full of animus toward [reform-minded] prosecutors," Hinkle said on the last day of a three-day trial in Tallahassee. "Florida law does not allow a governor to remove a state attorney because the governor disagrees with a state attorney's general approach."

But attorneys for DeSantis insisted in court that was not why the governor suspended Warren, who was first elected to his position in 2016.

"We have someone here who was not going to enforce the law, based on his own statements," DeSantis attorney George Levesque told the judge.

According to the executive order suspending Warren in August, the state attorney demonstrated "incompetence and willful defiance of his duties" by implementing certain "policies of presumptive non-enforcement" and by co-signing a left-leaning advocacy group's public statements about state laws criminalizing gender-affirming care and abortions.

"[We] commit to exercise our well-settled discretion and refrain from prosecuting those who seek, provide, or support abortions," said a statement signed by more than 80 local, elected prosecutors from around the country on June 24, shortly after the U.S. Supreme Court overruled Roe v. Wade, leaving the question of abortion rights to the states.

After his suspension, Warren filed a federal lawsuit in August, asking a judge to have him reinstated as state attorney. Hinkle, a Clinton appointee, is deciding the case without a jury.

During trial this week, Hinkle said the outcome of the case hinges on the "real reason" for Warren's suspension: Was it about Warren's conduct -- a lawful basis -- or was it really about his speech, which would violate Warren's First Amendment rights?

Hinkle suggested the curated text of the executive order alone may not "tell the whole story" of what truly motivated Warren's suspension.

An attorney for Warren, David O'Neil, told Hinkle that Warren's suspension was a "political hit job," targeting his rights to free speech.

"Mr. Warren was suspended from his office because of what he said and what he believed," O'Neil said.

The statements Warren signed -- which were also supported by dozens of prosecutors from other parts of the country -- were "purely symbolic, purely an expression of values," O'Neil said.

According to three days of witness testimony, DeSantis' so-called "public safety czar," Larry Keefe, asked people he knew in the law enforcement community if there were any state prosecutors refusing to enforce the law.

"All roads were leading to Mr. Warren," Keefe testified. A Republican sheriff in Warren's own county even sent Keefe a packet flagging two of Warren's policies that he found worrisome, including one policy -- issued in the midst of the COVID-19 pandemic -- telling prosecutors to only bring low-level charges like trespassing or public intoxication under certain circumstances.

In testimony, Keefe conceded that, of those whose party affiliations he knew, all but one of the people he spoke with early on about Warren were Republican.

Then, months later, as the Supreme Court was overturning Roe v. Wade, Warren signed the abortion-related statement from the group Fair and Just Prosecution.

In pressing DeSantis' attorneys, Hinkle said "a possible view of the facts" is that DeSantis was "genuinely opposed" to "more lenient," liberal-minded prosecutors, and "it would be good politics to take one down," so he mentioned that to Keefe, who went "out looking for" them.

"He finds one," Hinkle said. "He conducts a very one-sided inquiry ... [and then] incidentally, he finds the abortion statement. Bingo."

But at least one senior lawyer in DeSantis' office who helped formulate Warren's suspension testified that the abortion-related statement and the other Fair and Just Prosecution statement relating to transgender issues, would not by themselves have led him to recommend Warren's suspension.

A key point of contention throughout the trial was whether Warren's signature -- and official title -- on the Fair and Just Prosecution statements amounted to official policy.

Signing the abortion-related statement "was an announcement we were not going to prosecute cases under the law," and it told prosecutors in Hillsborough County "what Mr. Warren wanted from them," Warren's former chief of staff, Gary Weisman, testified in court.

The top lawyer in the governor's office, general counsel Ryan Newman, agreed, saying any "reasonable person" would view the statements Warren signed as "a pledge," making Warren's suspension not only warranted but lawful under Florida state law.

Warren himself disputed that the statements reflected any type of policy or pledge, testifying that he signed them because he "agreed with the general idea" behind them.

To emphasize that point, O'Neil noted that Warren never disseminated the statements he signed -- as he would with an official policy -- and that the statements never impacted "a single" case because no abortion-related case was ever referred to Warren's office for prosecution, and the state of Florida doesn't even have a law relating to gender-affirming health care.

When DeSantis announced Warren's suspension in August, he accused Warren of promoting an agenda that is "basically 'woke,'" elevating his "own personal conception of, quote, 'social justice' over what the law requires of you."

During his testimony this week, Warren defended his time in office, saying the policies he implemented were about efficiency and "fairness" in the criminal justice system, and about trying "to steer low-level offenders away from the downward spiral of the system."

Warren's attorney told the judge that upholding Warren's suspension would have a "chilling" effect on the free speech of other elected officials.

"What other state attorney is going to speak out on policy issues the defendant disagrees with?" he asked.

Prosecutors, however, said Warren's actions made him unlike other elected prosecutors in Florida.

"It's not as though every [reform-minded] attorney is somehow on the chopping block," Newman said.

DeSantis declined to testify in his own defense, which O'Neil said left "a massive hole in the center of [the governor's] case."

Judge Hinkle, meanwhile, expressed concern that no one affiliated with DeSantis contacted Warren or any of his staffers to inquire about his office's practices and policies.

"You do understand he's not getting paid -- they've taken his job," the judge told Newman while he was on the stand. "Didn't you think you owed [Warren] any due process before you suspended him for months? ... At least pick up the phone and call him?"

Nevertheless, Hinkle made clear that -- even if he's critical of how it transpired -- he hasn't decided whether the suspension was unlawful.

"I don't know who's going to win," the judge said.

abcnews.go.com - 2 years ago
Iran state television has named a suspect in the attack that damaged centrifuges at its Natanz nuclear site and says he fled the country
Read More

abcnews.go.com - 2 years ago
An international monitoring group says Colombia has failed to protect human rights activists in its remote communities, resulting in hundreds of slayings since the government reached a peace deal with the country's biggest rebel movement in 2016
Read More
More News & Articles