Just over 24 hours after one of their worst losses of the year, the Knicks rebounded with one of their best wins, 92-81 over the contending Cavaliers.
Author: Zach Braziller
Published: 2022-12-04 09:12 pm 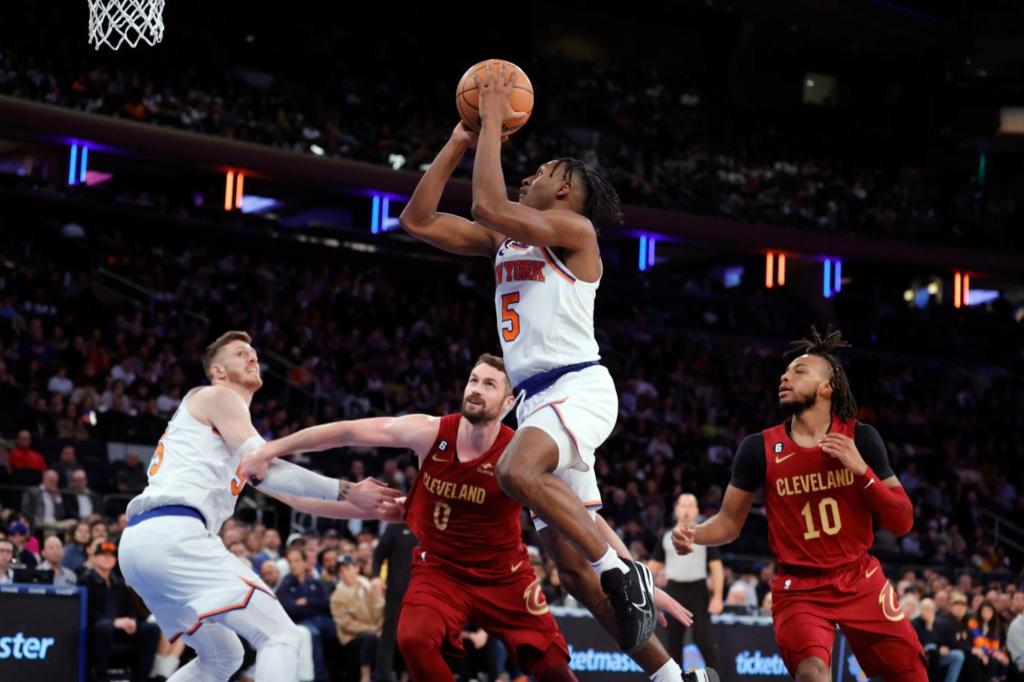 There was a strange sound coming out of the Garden on Sunday night. It was different. It was loud. It was … cheers. Applause. Actual positive noise.

For the first time since Nov. 11, Tom Thibodeau’s team left the MSG floor victorious, snapping a four-game skid and a stretch of seven losses in eight games on the home floor. For the first time all season, the Knicks beat a quality team at home. And they did it behind their best defensive efforts of the year, after a rare strong third quarter.

Just over 24 hours after one of their worst losses of the year, the Knicks rebounded with one of their best wins, 92-81 over the contending Cavaliers.

Donovan Mitchell, the Elmsford, N.Y., native who team president Leon Rose failed to acquire in prolonged trade talks with the Jazz over the summer, was limited to 23 points on 22 shots. His All-Star running mate, Darius Garland, managed just 17 points on 19 shots. Cleveland was held to a season-low in points and shot just 8 of 35 from 3-point range, a defensive weakness for the Knicks most of this season.

Defense won this game, because the Knicks weren’t at their best offensively. They committed 20 turnovers and hit only 5 of 29 3-pointers. But they hadn’t defended like this, either. It was the first time an opponent failed to reach 100 points against them this season.

Jalen Brunson scored a team-high 23 points, and put the game away with a clutch jumper that extended the lead to seven with 1:55 to go. He then set up Julius Randle (18 points, eight rebounds, four assists) for a layup and he hit two free throws. RJ Barrett added 15 points and Immanuel Quickley had 12 off the bench.

The first half followed a similar pattern: The Knicks (11-13) start well. They build a lead. Then, they fall apart. They held the cold-shooting Cavaliers to 16 first-quarter points. Cleveland missed six of its first 32 shots and were behind by as many as 18 after a Brunson three-point play capped a 14-2 run.

Like Saturday’s loss to the Mavericks, the game flipped. The Cavaliers (15-9) hit 10 of their next 13 shots, and only trailed by three points at the break. Live-ball turnovers, a season-long issue for the Knicks, led to run-outs for Cleveland, and easy baskets. In the second quarter, the Knicks committed six turnovers, two by Barrett, and the Cavaliers racked up 13 points in transition.

It was a rough opening half for Barrett, who missed seven of eight shots, all four of his 3-point attempts and committed five turnovers. The best Knick was Brunson. He produced a 15-point half.

The Knicks followed that up with a much better third quarter, after getting smoked, 41-15, by the Mavericks on Saturday coming out of halftime. They put together a 13-4 run to push the lead back to 12 and took an eight-point edge into the final quarter. Barrett and Randle produced 21 of the team’s 25 points in the stanza, with Barrett shooting a perfect 4-for-4 from the field including a pair of 3-pointers. If not for eight more turnovers, the Knicks would have entered the last 12 minutes firmly in command.

nypost.com - 6 months ago
The suspect was eventually tased and arrested, while the bleeding cop was taken to Bellevue Hospital, sources said.
Read More

nypost.com - 7 months ago
"High surface temperatures caused a small section [of the runway] to lift," the airport said in a statement.
Read More
More News & Articles