The FBI warned Twitter during “weekly” meetings before the 2020 election to expect “hack-and-leak operations’’ by “state actors” involving Hunter Biden, and “likely” in October, according to a sworn declaration.
Author: Miranda Devine
Published: 2022-12-04 10:52 pm 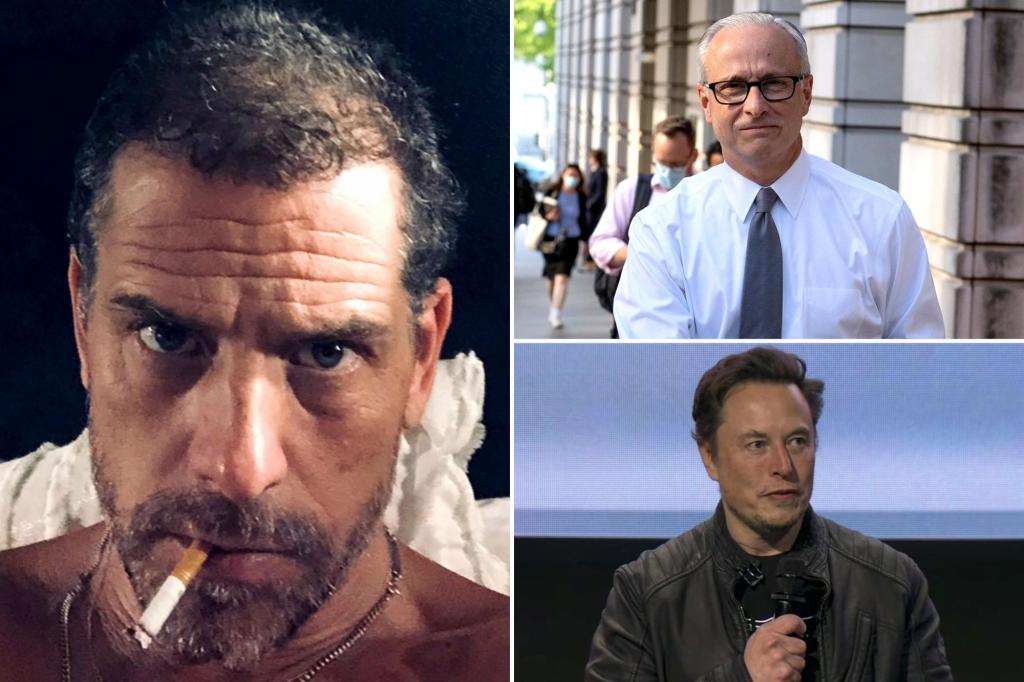 The FBI warned Twitter during “weekly” meetings before the 2020 election to expect “hack-and-leak operations’’ by “state actors” involving Hunter Biden, and “likely” in October, according to a sworn declaration by Twitter’s former head of site integrity, Yoel Roth.

The warnings were so specific that Twitter immediately censored The Post’s scoop about Hunter Biden’s laptop on Oct. 14, 2020, citing its “hacked materials” policy, a move described on Saturday as “election interference” by Twitter’s new owner, Elon Musk.

The extraordinary revelation for the first time lays bare how the FBI was involved in pre-bunking the story of the laptop, which had been in the bureau’s possession for almost a year.

“I was told in these meetings that the intelligence community expected that individuals associated with political campaigns would be subject to hacking attacks and that material obtained through those hacking attacks would likely be disseminated over social media platforms, including Twitter,” said Roth in a Dec. 21, 2020 declaration to the Federal Election Commission.

“I also learned in these meetings that there were rumors that a hack-and-leak operation would involve Hunter Biden.”

Roth’s signed declaration formed part of Twitter’s defense against a complaint by the Tea Party Patriots Foundation that its censorship of The Post was an “in­ kind” campaign contribution to then-presidential candidate Joe Biden’s campaign.

The FBI also warned Facebook to be on “high alert” for a “dump” of “Russian propaganda” before the 2020 election, in terms specific enough that it “fit the pattern” of The Post’s story, CEO Mark Zuckerberg told podcast host Joe Rogan in August.

Facebook also censored The Post ahead of Twitter’s throttling the story in October, pending “fact checks” that never appear to have been done.

The FBI agent who organized those weekly meetings with Big Tech was Supervisory Special Agent Elvis Chan, whose postgraduate thesis claimed that Russia interfered with the 2016 election to help former President Donald Trump.

Chan testified by Zoom Tuesday in a lawsuit against the Biden administration that he organized the meetings in San Francisco for as many as seven DC-based FBI agents in the run-up to the 2020 presidential election. Chan also organized weekly meetings with Facebook.

The lawsuit brought by the Republican attorneys general of Missouri and Louisiana, alleges that White House officials and federal agencies acted with Big Tech to censor “disfavored speakers, viewpoints and content on social-media platforms.”

Under questioning by Missouri Solicitor General John Sauer Tuesday, Chan said that the FBI warned Twitter to be on guard for a “hack and leak” operation but could not recall whether Hunter Biden was mentioned.

This is a crucial inconsistency with Roth’s sworn declaration saying the FBI specifically mentioned Hunter.

The FBI used the meetings to lobby the social media platforms to change their terms of service in order to be able to quickly take down “hacked material,” says a source with access to a transcript of Chan’s testimony.

It looks very much as if the FBI pre-bunked a story they knew was coming about Hunter Biden. But how would they know The Post was going to publish the story in October 2020?

Well, the FBI was spying on Trump’s then-lawyer Rudy Giuliani’s online cloud, under the pretext of an investigation into alleged foreign-agent registration violations, a probe which conveniently was dropped this year.

The covert surveillance warrant on Giuliani gave the FBI access to emails in August 2020 from Delaware computer repair store owner John Paul Mac Isaac disclosing information damaging to Joe Biden from the laptop Hunter Biden had abandoned at his store in April 2019.

The FBI also had access to my messages with Giuliani in October discussing when The Post would publish the story.

The FBI knew that Mac Isaac was a legitimate whistleblower because he had come to them in the fall of 2019 to express national-security concerns about evidence on the laptop of payments to the Biden family from Ukraine and China. On Dec. 9, 2019, two agents arrived at his store with a subpoena and took the laptop and a hard-drive copy.

We know from FBI whistleblowers who have come forward to Republican members of Congress that rogue FBI employees within the Washington Field Office buried the laptop and other information detrimental to Joe Biden before the 2020 election.

Now, thanks to Elon Musk, we know more about Twitter’s role in this apparent interference.

During a live Q&A session on Twitter Saturday afternoon, Musk said: “If Twitter is doing one team’s bidding before an election, shutting down dissenting voices on a pivotal election, that is the very definition of election interference. . . . Frankly Twitter was acting like an arm of the Democratic National Committee. It was absurd.”

But, despite promises to reveal all about the censorship of The Post, Musk’s Friday night dump of what he calls the “Twitter Files” left out one crucial element: the FBI.

Journalist Matt Taibbi, deputized by Musk to release the information, tweeted that “there’s no evidence — that I’ve seen — of any government involvement in the laptop story.”

Sign up for Devine Online, the newsletter from Miranda Devine

This contradicts Roth’s sworn declaration that the FBI warned of a “hack and leak” operation involving Hunter Biden, as well as Twitter’s lawyers’ response to the FEC in December 2020.

Law firm Covington & Burling told the FEC that Twitter “had been warned throughout 2020 by federal law enforcement agencies to be on the alert for expected ‘hack-and-leak operations’ undertaken by malign state actors, in which those state actors might hack electronic communications of individuals associated with political campaigns and seek to disseminate the leaked materials. . . . Reports from the law enforcement agencies even suggested there were rumors that such a hack-and-leak operation would be related to Hunter Biden.”

Then there is the curious role of Twitter deputy general counsel James Baker, who is former general counsel at the FBI where he was involved in Russia-collusion plots against Trump.

According to Taibbi, Baker advised that The Post’s story should be censored because “the materials may have been hacked [and] caution is warranted. “

Before he was parachuted into Twitter, in June 2020, conveniently just five months before the election, Baker was a personal acquaintance of FBI agent Chan.

Chan testified Tuesday that he knew Baker from when they worked together in 2016 with FBI “lovebirds” agent Peter Strzok and lawyer Lisa Page on an investigation of a hack on Yahoo.

He said he remains in touch with Page, who, with Strzok, was forced out of the bureau after their virulently anti-Trump text messages were revealed.

Baker also is connected to some of the 51 intelligence officials who signed the Oct. 19, 2020 letter, published five days after The Post’s laptop bombshell, falsely alleging that Hunter’s laptop had “all the classic earmarks of a Russian information operation.”

Three days after the letter, candidate Biden used the letter to get off the hook in his final debate against Trump: “There are 50 former national intelligence folks who said that what [Trump is] accusing me of is a Russian plant . . . what he’s saying is a bunch of garbage.”

Between leaving the FBI in 2018 and joining Twitter, Baker worked for the Brookings Institution, writing for the Lawfare Blog, which is published by David Priess, an ex-CIA agent who signed the “Dirty 51” letter and is the chief operating officer of the Lawfare Institute and publisher of the blog. Six more signatories of the letter are linked to the Lawfare Blog.

It’s a cozy network where everyone was rooting for Biden to beat Trump in 2020 — and Twitter was a useful fellow traveler.

DeShone Kizer: Aaron Rodgers pressed me on 9/11 conspiracies in one of first meetings

nypost.com - 2 months ago
Former Packers quarterback DeShone Kizer is opening up about what was apparently a very quizzical early encounter with Aaron Rodgers.
Read More

nypost.com - 1 year ago
A few millennia later, there is still much to learn about deceptively advanced early civilizations, particularly the indigenous peoples of North America.
Read More

nypost.com - 2 years ago
In a year of chaos in the NCAA Tournament, Baylor, the No. 1 seed in the South Region, has been able to overcome it and make the Elite Eight. Now the Bears must get by an Arkansas team that has won 12 of its past 13. Both teams do a good job of generating
Read More

Education Department to cancel $1.1B of debt for ITT Tech students

nypost.com - 1 year ago
The US Department of Education is canceling more than $1.1 billion in student debt for 115,000 borrowers who attended the now-defunct ITT Technical Institute.
Read More
More News & Articles