Jon Feliciano had a strong criticism of the officials who threw a game-changing penalty flag against him for flexing his muscles.
Author: Ryan Dunleavy
Published: 2022-12-04 11:21 pm 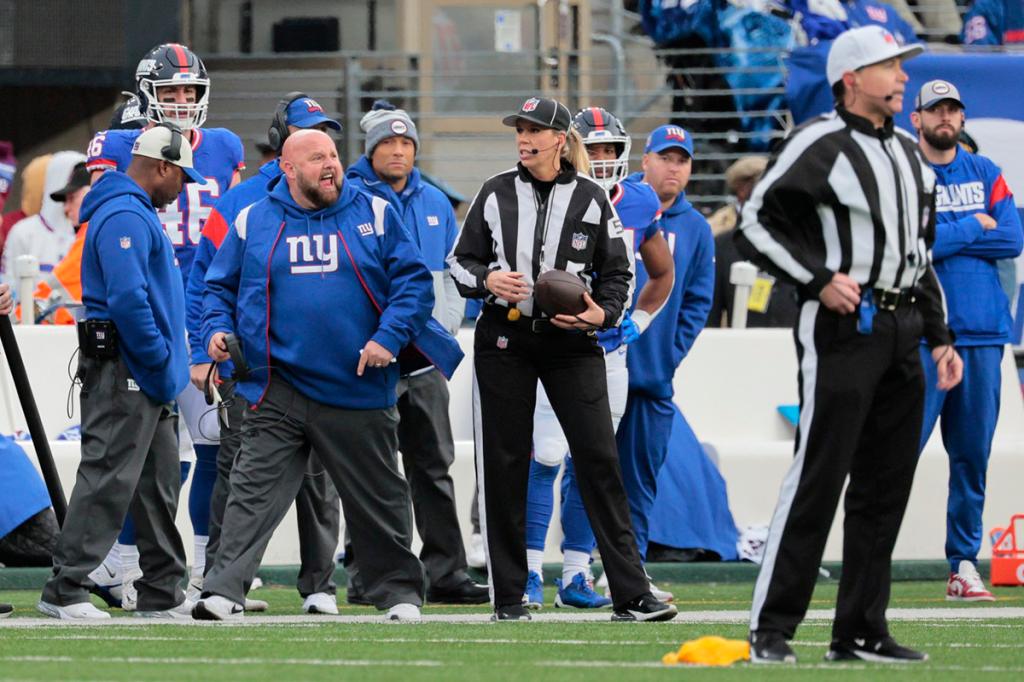 Jon Feliciano had a strong criticism of the officials who threw a game-changing penalty flag against him for flexing his muscles.

With the Giants in range to possibly open up a two-score lead with less than six minutes remaining in the fourth quarter, Feliciano was penalized for unsportsmanlike conduct, pushing the line of scrimmage back 15 yards and turning a potential 53-yard (or closer) field-goal attempt into a punt. Head coach Brian Daboll was livid on the sideline, and the Commanders made the Giants pay by scoring on the ensuing possession for the final points of a 20-20 overtime tie on Sunday at MetLife Stadium.

The veteran center initially declined to opine on the call against him — “You know they like to take money out of players’ pockets, especially when stuff like this happens,” Feliciano said — but he changed his tune as he weighed other calls and non-calls throughout the unsatisfying tie.

“It sucks, especially when you are playing two teams,” Feliciano said, in reference to the Commanders and the officials. “I know that will probably get me fined.”

The Giants led 20-13 with 6:13 to go when Jones started a possession with a 12-yard completion to Darius Slayton, who fought through multiple tackles to go from short of the sticks to a first down at the 35-yard line. Feliciano ran over to Slayton and flexed his arms with a couple of Commanders around the ball.

“He had six guys on him on a big play,” a hyperbolic Feliciano said. “Trying to celebrate with a teammate. Didn’t look at anybody else. Looking straight at Slay.”

“I didn’t see him,” Slayton said. “Whenever he got the penalty he got, I didn’t know what was going on, to be honest.”

The Giants had a 92.2 percent chance to win before that penalty, according to ESPN analytics. The probability flipped in Washington’s favor after their tying touchdown.

“He was going up to Slayton and saying, ‘Hey, good job. Strong run,’ but it was … close [to] all those players,” Daboll said. “So, how the [official] looks at it and interprets it. I don’t think he can hear what Jon is saying to Slayton, so, they ended up calling it. Obviously, we shouldn’t even be in that situation. It’s going to be a first down. We’re at the 35, probably make it a two-score game. Those are things we can’t even make it close.”

Feliciano spent the rest of the game trying to make up for the call.

“Regardless, the ref called it that way,” he said. “I was fixated on doing my best to recoup what happened.”

The Giants were called for four penalties for 34 yards, while the Commanders totaled seven for 56.

But one play that Feliciano didn’t like was when receiver Richie James made a 14-yard catch with 16 seconds left in overtime and was bumped as he got to his feet when the Giants were hustling to get a spike to stop the clock. If that was called unnecessary roughness, the clock would’ve stopped, and the Giants would’ve lined up for a shorter field goal than the 58-yarder missed as time expired.

“I’m pretty sure you are not allowed to hit Richie when he is trying to bring the ball to the ref in the two-minute drive,” Feliciano said. “That’s a flag.”

Braves vs. Phillies prediction: Atlanta the pick in this spot

nypost.com - 2 years ago
Phillies starter Aaron Nola has been one of the best pitchers in the National League since bursting onto the scene with an All-Star season in 2018, but his splits are unfavorable for Sunday’s game in Atlanta. Nola has a career 35-17 record with a 2.90 ERA
Read More

How Canelo Alvarez-Billy Joe Saunders bout will play out

nypost.com - 2 years ago
Saturday evenings in Arlington, Texas, are sometimes reserved for NFL playoff nights for the Cowboys. This Saturday, a gunslinger from across the border rides into town and AT&T Stadium plays host to the biggest draw in boxing. Three super-middleweight
Read More

nypost.com - 1 month ago
The electrical box is shown blasting into a fireworks-like flash Thursday in the Kansas City suburb of Liberty as nearby buildings plunged into darkness, according to police dash camera footage.
Read More