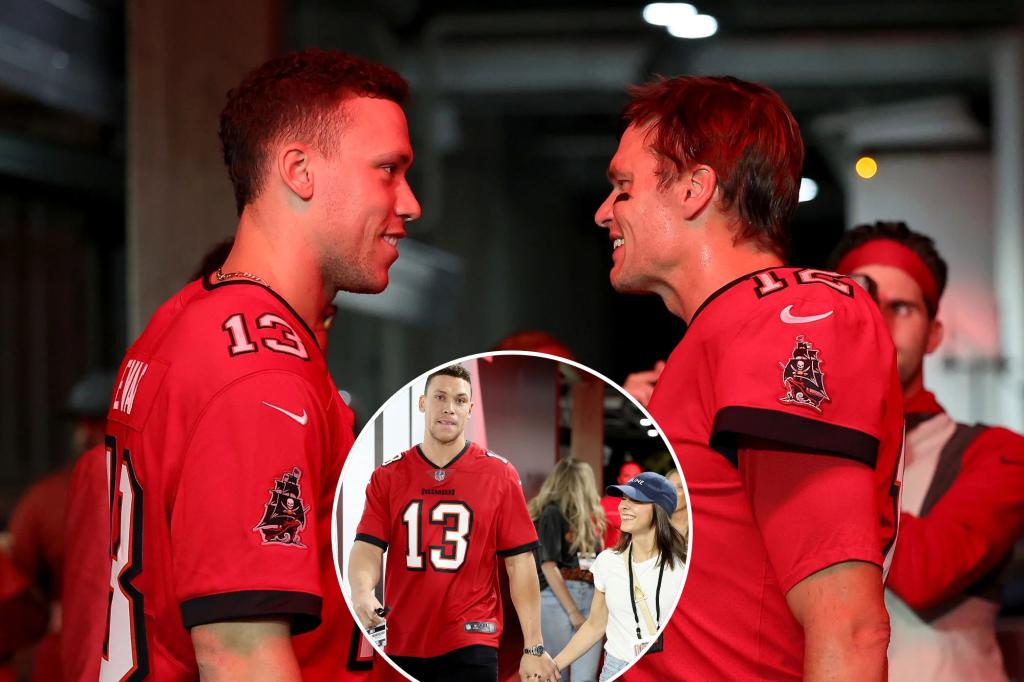 Let’s not read too much into this, Yankees fans, OK?

Free agent outfielder Aaron Judge took in Monday’s Buccaneers-Saints matchup in Tampa Bay along with wife Samantha Bracksieck, repping a Bucs jersey as he milled around with players on the sidelines and in the tunnel.

The 2022 American League MVP wore a Mike Evans in support of both the wideout, who donned a Judge jersey after the Bucs’ Oct. 9 win against the Falcons, days after Judge set the AL home run record.

“Shoutout my boy Aaron Judge,” Evans said when asked about the jersey during that October presser. “MVP!”

The hulking outfielder was also spotted chatting with a certain quarterback that knows about making an exit.

Judge shared a hug with star quarterback Tom Brady, who famously ditched New England for a warmer climate and won a sixth Super Bowl title with the team.

It is not yet known what the two spoke about, but it’s possible the 45-year-old signal-caller passed along some free agent wisdom.

Judge, the marquee free agent on the MLB market, is not rushing to make a decision. He reportedly received a $300 million-plus offer from the Yankees, while the Los Angeles Dodgers and his hometown San Francisco Giants are among the front-runners, as well.

The small-market Rays? Not exactly in the mix for the high-priced Judge, though it would seem he’s got some friends in the area if he decided to surprise everyone.

nypost.com - 1 year ago
Two gunmen trailed by moped-driving accomplices fired off 37 shots and wounded 10 people in Queens Saturday night before fleeing on the vehicles in a "coordinated attack."
Read More

nypost.com - 2 years ago
Here’s an inside look at some issues facing the Mets as the 2021 season approaches: Best position battle: There isn’t a glaring job competition heading into camp, but the back of the end of the rotation — behind Jacob deGrom, Carlos Carrasco and Marcus
Read More

UK to host 2023 Eurovision Song Contest instead of Ukraine

nypost.com - 6 months ago
The European Broadcasting Union (EBU) said the the Russian invasion of Ukraine forced them to look at other potential host countries.
Read More

nypost.com - 4 months ago
The Carolina Panthers have fired head coach Matt Rhule after another ugly loss on Sunday dropped them to 1-4.
Read More
More News & Articles