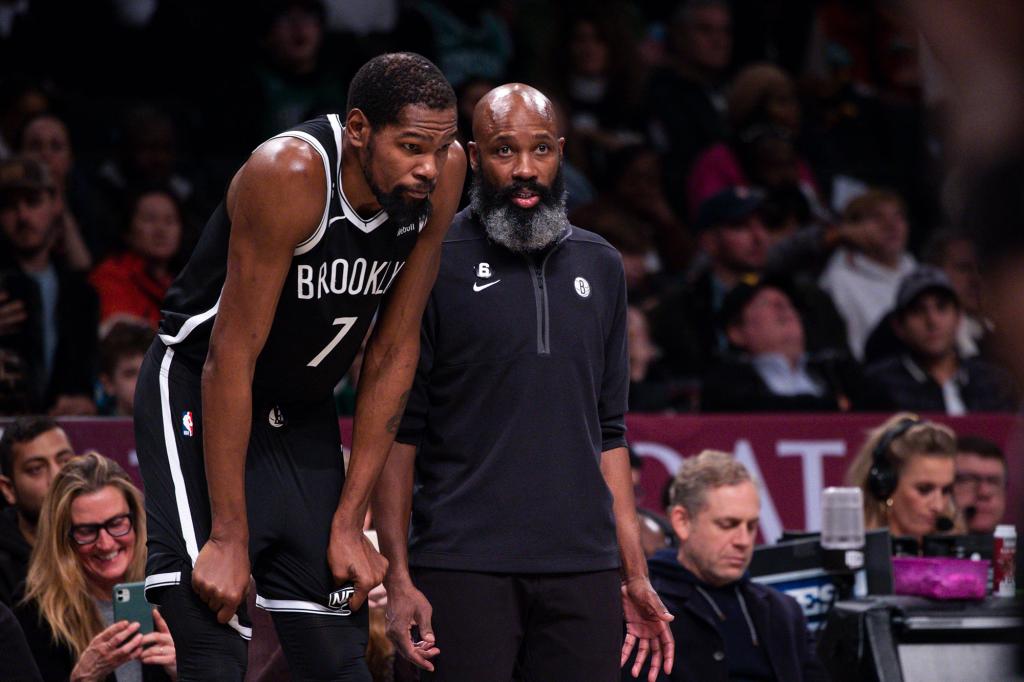 Kevin Durant is giving the Nets an MVP-caliber season, with more points — and minutes — than any other player in the NBA.

What they aren’t giving him in return is enough help.

Durant earned Eastern Conference Player of the Week honors on Monday, his fifth for the Nets. And ironically, it’s coming off a loss in which he drew incessant fourth-quarter double-teams from Boston, and the Nets proved themselves utterly incapable of cashing in on all the open looks his gravity created for them.

“Just overall, we have to take advantage when teams double-team,” Nets coach Jacque Vaughn said. “If you’re going to send a second guy at our best player, then we’ve got to make you pay for it. … Two times it was T.J. [Warren], who hasn’t practiced or played with us; little hesitation on his cut down the middle.

Durant came into Monday leading the NBA in points (747) and, unfortunately for the Nets, minutes logged (922). They are placing too heavy a burden on him, not just in terms of his role but minutes played.

“It’s not ideal,” Vaughn said recently. “While we’re in the win-now mode, win today’s game, we are behind the scenes talking about what the stretch looks like beyond tomorrow, beyond the next day. So it is on our minds.”

The Nets enjoyed a day off Monday and will practice Tuesday before hosting Charlotte on Wednesday. Then comes a back-to-back against Atlanta and at Indiana.

It would behoove Vaughn and the Nets not only to come up with a plan to relieve the burden on Durant, not only to curtail his minutes but also to find a way to be more effective around him when he is playing.

It’s easy for Durant’s stellar campaign to get lost on the national stage due to both the Nets’ middling 13-12 mark as well as because of the red-hot starts of stars like Jayson Tatum and teams like the Celtics, to whom the Nets lost Sunday night.

Durant had been smothered by the Celtics in last season’s playoff sweep by incessant double-teams. After averaging 34.3 points on 51.4 percent shooting through his first 12 playoff games as a Net, Durant got harassed into uncharacteristic 38.6 percent struggles with 21 turnovers by Boston.

Sunday, the Celtics — even without top defenders Marcus Smart and Robert Williams III — played Durant more straight-up through three quarters, albeit selling out on his drives and crowding the paint. But in the fourth quarter, they pulled out the blitz, doubling Durant and giving the other Nets open looks.

“That’s why the game in so interesting, right?” Vaughn said philosophically. “[The] previous years they double-teamed him.

“First three quarters they didn’t, then he started going off in the post and they double-teamed him. And it was a mixed bag for us.”

Mixed bag is kind. Durant finished 13 of 24 from the floor against Boston, with the rest of the Nets just 21 of 60 — or 35 percent. There were clean looks on kickouts. However, Warren is still getting up to speed, Royce O’Neale hit just 2 of 8 from deep, Seth Curry was so saddled with foul trouble that he didn’t put up a single 3, and Ben Simmons and Yuta Watanabe were both out injured.

The absence of Simmons and Watanbe has shortened the Nets’ bench, outscored 24-15 by Boston’s reserves. Patty Mills has taken five straight DNPs. Whether it’s the reinsertion of any of that trio, or tweaks by Vaughn, the Nets have to cash in on the looks that Durant’s dominance is buying them.

“It’s a make-or-miss league,” Durant said. “It’s about offense in this league. [Boston] made shots.”

nypost.com - 1 year ago
The “Fresh Prince” is dead! Long live the “King”! Will Smith re-ignites his fading career as Venus and Serena executive produce a well-rounded biopic about their controversial father.
Read More

nypost.com - 1 year ago
Ever wonder what’s up with those colorful globes outside subway entrances? The orbs once represented an entire color-coded system for New Yorkers in the know.
Read More

nypost.com - 2 years ago
A Los Angeles restaurant owner who went viral with her passionate complaint about the hypocrisy of COVID-19 restrictions on her outdoor dining while an NBC comedy was allowed to have a nearly identical setup for its cast and crew blasted officials Monday
Read More

China threatens nuclear war, expanding arsenal in case of ‘intense showdown’ with US

nypost.com - 2 years ago
​The media mouthpiece for the Chinese Communist government, the Global Times touted China's goal to expand its arsenal of nuclear missiles in anticipation of an "intense showdown" with the US.
Read More
More News & Articles