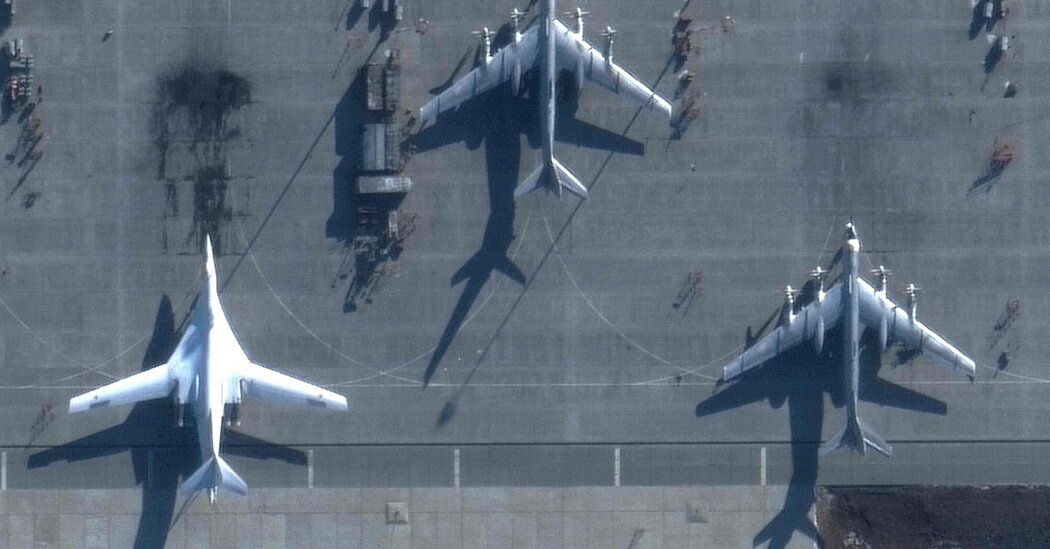 Ukraine executed its most brazen attack into Russian territory in the nine-month-old war yesterday, targeting two military bases hundreds of miles inside the country with drones.

At least one of the strikes was made with the help of special forces close to the base who helped guide the drones to the target, a Ukrainian official told The Times. The strikes signaled a new willingness by Kyiv to take the fight to bases in the heart of Russia and demonstrated for the first time Ukraine’s ability to attack at such long distances.

The Kremlin said that the weapons launched by Ukraine were Soviet-era jet drones and were aimed at bases in Ryazan and Engels, between 300 and 450 miles from the Ukrainian border, beyond the range of any known missile in Ukraine’s arsenal.

Moscow said that its forces had intercepted the drones, and that “the fall and explosion of the wreckage” had “slightly damaged” two planes, killing three servicemen. The fatalities occurred at the Dyagilevo military base in Ryazan, about 100 miles from Moscow.

For a while, it seemed as if Japan would take advantage of Croatia’s age, attacking and more than meriting its 1-0 lead at halftime. But slowly, surely, the businesslike Croatian team squeezed all of the fun out of Japan, writes Rory Smith. In the second half, the grizzled old warrior Ivan Perisic scored on a header to tie the match, and in the shootout, Croatia goalkeeper Dominik Livakovic stopped three shots.

In the quarterfinals, Croatia will face Brazil, which defeated South Korea yesterday, 4-1 — a score that did not fully capture the team’s carefree dominance. Brazil’s display surely cemented its status as one of the favorites to lift the FIFA World Cup Trophy on Dec. 18, and it will be favored over Croatia on Friday.

What’s next: Today, Morocco plays Spain, and Portugal plays Switzerland. Here’s what the bracket looks like.

Related: Visitors to Qatar looking for church services can go to Church City, a government-sanctioned island of Christianity on the outskirts of Doha that includes eight churches.

Life in some European cities may soon look like this: staggered electricity outages. Temporary cuts in mobile phone and internet service. Schools closed for a lack of lighting and heat. Even traffic lights could briefly be powered down.

As an unseasonable streak of mild weather gives way to freezing temperatures, governments are starting to brace people for a winter without Russian gas.

The French government last week started instructing officials around the country to plan for potential rolling electricity outages as soon as next month. Britain’s National Grid operator has warned households of possible blackouts from 4 p.m. to 7 p.m. if gas used to produce electricity runs short. In Germany, sales of candles have soared.

European officials are insisting that the rationing plans are only a last resort. But governments have already been dipping into some of the emergency gas reserves, driving European natural gas prices back up to their highest levels in six weeks.

Markets: Energy traders pushed crude prices higher yesterday after Europe’s embargo of seaborne Russian crude and the introduction of a price cap by the Group of 7 nations.

Russia: Sanctions have not collapsed Russia’s economy, but drivers of growth, like technology transfer and investment, are eroding.

Magnus Carlsen, the world’s best chess player, was defeated by an American teenager, Hans Niemann, who was previously known only to serious fans of the game and mostly as an abrasive jerk. Then Carlsen accused his opponent of cheating. It’s either overdue justice or paranoia.

U.S.M.N.T. prospects for 2026: The Americans’ 2022 World Cup squad featured a lot of young players, but there are still more who could emerge and challenge for roster spots over the next few years.

Is England actually good?: The win over Senegal showed nothing that we didn’t already know about Gareth Southgate’s team. A date with Kylian Mbappé and France will be the real test.

Qatar 2022’s stadiums, ranked: The Athletic power ranked the eight World Cup stadiums based on some very unscientific criteria. The winner might surprise you.

Stuart Reid, a consultant employed by soccer teams around the world, watches hundreds of corner kicks a day, annotating and assiduously cataloging them. Over the years, he has built an unrivaled database of corners, turning a niche hobby into a career.

The more corners he dissected, the more he realized something. Although soccer is now a resolutely globalized game in which ideas spread around the world in the blink of an eye, corners remain relatively untouched and defiantly local.

On defense, Brazilian teams rely heavily on zonal marking — in which each player defends a small area — and defenders stand relatively far from the goal. Argentine and Dutch teams favor man-to-man marking, in which players are assigned to a specific opposing player.

On offense, Danes, who tend to be tall, like to pack the area around the goalkeeper in the hopes of getting a header or at least getting in the way. And Spaniards are opting out: Some studies have suggested that corners are inefficient, so La Liga teams often make a short pass to simply restart open play.

In Russians’ New Feed, a War Over Western Plans to Subjugate Them

www.nytimes.com - 5 months ago
In the Kremlin-controlled news media, the war is not about Ukraine, but about a long history of enemies trying to keep Russia down.
Read More

Paul Fusco, Photographer on a Funeral Train, Dies at 89

www.nytimes.com - 3 years ago
The pictures he took after Robert Kennedy’s assassination are among his many photographs that captured the human side of important events.
Read More

Unmasked Police Officers Remove a Subway Rider After He Confronts Them

www.nytimes.com - 1 year ago
Andrew Gilbert said he repeatedly asked two officers to wear masks in accordance with M.T.A. and Police Department policy. He was eventually pushed out of the station.
Read More