In a video posted to his social media in May, Mr Eyles was filmed taking the clown car, which did not have number plates, through a McDonald’s drive-through.
Author: News.com.au
Published: 2022-12-06 03:55 am 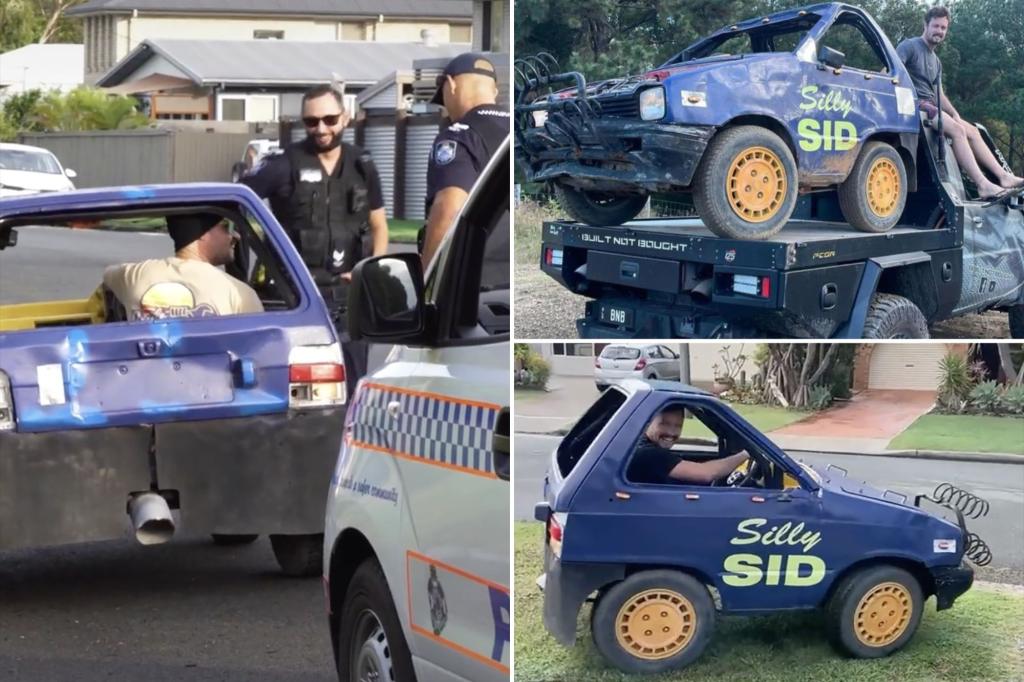 A TikTok star has been slapped with a long list of fines and charges after taking a novelty ‘clown car’ for a spin.

Sammy Eyles, from the motoring social media channel Built Not Bought, has amassed millions of views on TikTok, Facebook, Instagram and YouTube, with plenty finding entertainment in his videos of four-wheel driving adventures and mechanical modifications.

But his latest stunt has landed him in trouble with Queensland Police.

In a video posted to his social media in May, Mr Eyles was filmed taking the clown car, which did not have number plates, through a McDonald’s drive-through.

After leaving the fast food chain, he was pulled over by police who appeared to show interest in the vehicle – warning him he was not able to drive it on the road, but eventually letting him continue on home.

Another video of the car, called ‘Silly Sid’, filmed in May, shows it being driven on a country road where it skids out of control and rolls down an embankment.

But on Monday, eight months after the video was filmed, he was slapped with 11 charges, including dangerous operation of a motor vehicle, careless driving and drive defective vehicle, among a raft of others.

Mr Eyles took to social media on Monday to explain what had happened, detailing a September 30 raid on his home on the Sunshine Coast.

“We took it out to a closed road which was actually gazetted – that’s where the problem is, it wasn’t a private road, we should have been on a private property when we were doing this,” he conceded.

“I was bloody sitting there in me undies eating mac and cheese of all things, and they just barged (in),” he said.

“They took all my hard drives, computers, phones, cameras, everything.”

Mr Eyles said five of his cars were found to be defective by authorities, and two were seized.

He shared his thoughts on being let go after his trip to McDonald’s in Silly Sid.

“All my cars are off the road because they’re all bloody dangerous, apparently.

“You gotta just be a bit more careful about what you do online – you’re in the spotlight all the time.”

They will allege he bought the “clown car”, which has a fuel system made up of a plastic jerry can attached to a rubber hose, and made extra modifications.

“He then allegedly performed “stunts” in the vehicle on multiple occasions, including repeated burnouts, front wheel stands and in one instance a tug of war between the car and a group of men holding a snatch strap,” a Queensland Police statement said.

“The car was also crashed at speed in Beerwah, rolling down an embankment.

“Vision of the driving was then shared across various social media channels.”

Police said an investigation into Mr Eyles’ online activity, prompted a search warrant for his property.

“Police, with the assistance of the Department of Transport and Main Roads, conducted an inspection of the vehicles at the address, which were subsequently grounded for allegedly being grossly defective and non-compliant,” Queensland Police said.

Police confirmed the clown car and another vehicle were seized.

Nine others in Mr Eyles’ network were also issued 70 Traffic Infringement Notices with a combined total of 99 associated demerit points.

Mr Eyles said this some of those penalised lost their licences as a result.

“Putting not only your own life at risk but those of your mates for the sake of social media notoriety is childish and selfish behaviour,” he said.

“Sharing these antics with his large contingent of online followers has come at a significant financial cost, both in fines and the loss of vehicles,” he said.

“Our message to anyone taking part in foolish and high-risk activities or thinking you can push modified, unsafe vehicles to the limit is that we will continue to target you, investigate and take action.”

The investigation has so far cost Mr Eyles and his mates a potential $27,800 in total and are “likely to be issued and additional offences” upon further investigation by Queensland Police.

Under the state’s strict driving laws, determined hoons in Queensland face fines of up to $5338, and/or six months in prison and have their vehicles impounded or immobilised.

nypost.com - 9 months ago
The Honey Badger could be on his way back to Louisiana.
Read More

nypost.com - 2 months ago
“I don’t see how they defend themselves quite honestly,” luxury marketing expert Pam Danziger told The Post. “I think this will have a very strong impact on the brand ultimately.”
Read More

FanDuel Promo Code: Get $1,000 No Sweat Bet on Packers vs. Titans