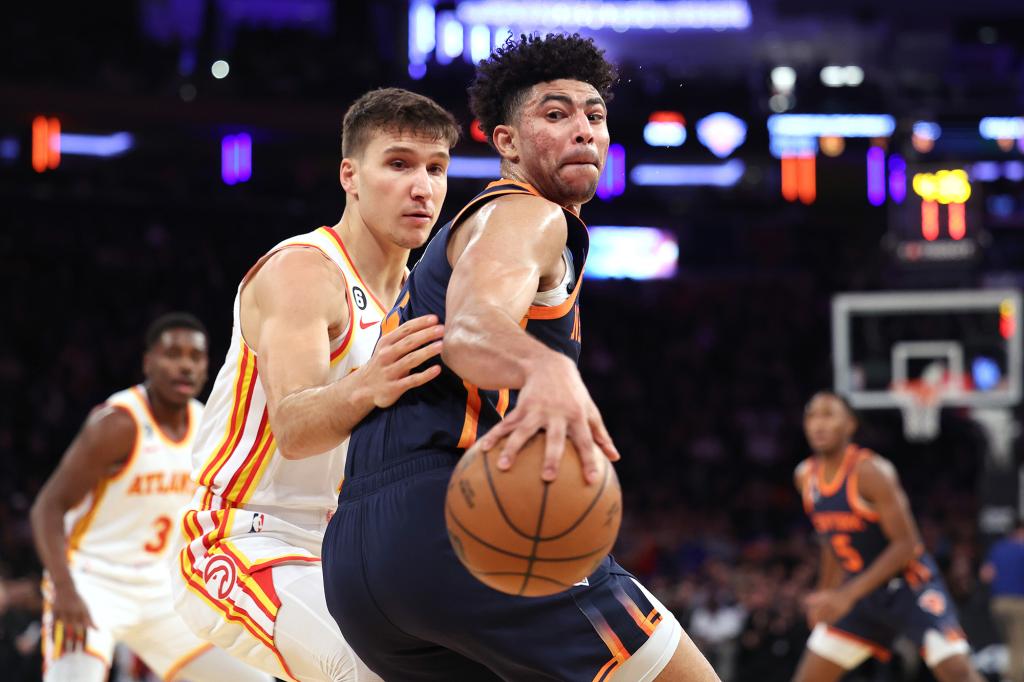 There were no apologies necessary. The Hawks were missing two regulars, then lost Dejounte Murray four minutes into the game. They were hurt, and they were short, and that catches up to a team, and so they were vulnerable. It happens. The Knicks were whole. They were healthy. They were home.

No apologies. No asterisks. The Knicks are at a part of their season where they need to stack as many victories as they can, and they did. They needed to figure out a way to play better at home, and they have, winning back-to-back against Cleveland and Atlanta, keeping both teams in the 80s, which had to make their defense-o-phile coach giddy.

Besides, the Knicks are in a period of discovery. The rotation has been shortened. The urgency has been quickened. It is helpful when Julius Randle channels the version of himself that carried the Knicks all across the 2020-21 season, as he did Wednesday (34 points, 17 boards). But it is more helpful when he gets some … well, help. And from some new sources.

Wednesday, there was Quentin Grimes.

Grimes poured in 23 points on 8-for-11 shooting (5 out of 7 from 3), he played superb defense and often made life difficult for Trae Young. Better, he did this after playing 40 ½ minutes in the win over Cleveland Sunday night. After getting a late start on the season because of a balky left foot, that’s not exactly incidental news.

“I think I’m fully back,” Grimes said. “It took me a couple of weeks to get fully back but I feel good.”

And he’s playing better and better. Grimes was always looked at as a genuine wild card in the Knicks’ deck this year following a terrific showing in summer league. He’s young (22), quick, athletic, a good shooter. He also plays defense the way Tom Thibodeau dreams all of his players would, as if the man he’s guarding owes him money.

Sunday he helped slow Donovan Mitchell. Wednesday it was Young. Maybe the Knicks simply don’t have the personnel to be a great defensive team across the board. But in Grimes they sure have a stopper-in-residence.

And when you toss in his shooting Wednesday … well, that makes for a genuine 3-and-D player. And that’s something the Knicks have been crying out for.

“He’s huge for us,” Randle said of Grimes. “He competes on the defensive end of the floor and that makes a difference.”

Thibodeau’s decision to shorten his rotation, after already cutting Evan Fournier out of the lineup a few weeks ago, has opened up minutes for a few of the Knicks’ kids. Grimes is in the starting lineup now and it may take an act of Congress to get him out of there, as effectively as he’s playing on both ends. Deuce McBride has replaced Derrick Rose for now as Jalen Brunson’s backup at the point.

“Our energy and out effort were great tonight,” said McBride, who had six assists in 27 minutes and helped alleviate the fact that Brunson turned in a rare clunker (2-for-14, four turnovers). “We were better at talking and communicating and it allowed us to execute our game plan.”

McBride also introduced what wouldn’t be the worst mantra to ever visit the Knicks’ locker room: “The basketball has magic in it.”

That’s a saying he’s brought with him from his basketball upbringing in Cincinnati, and it refers to making sure everyone around him gets a fair share of touches. Thibodeau would surely endorse that, and might add his own corollary: there’s charm in defense, too. And as much as Grimes’ shooting might’ve electrified the 18,901 inside the Garden, it was the other side that satisfied his coach.

“The way he plays defense, he reads closeouts so well,” Thibodeau said. “And it’s only going to get better and better as he gains more knowledge and gets more familiar with each guy. He studies. He has a knack for it. He’s a multiple-effort guy. The way he plays is the way he practices. Some guys practice half-speed and it’s a tough adjustment in the games. He’s the ultimate gym rat: comes early, stays late, a great competitor.”

And his emergence is just what the Knicks need now, as they try to alter the narrative that has strangled them so often. His energy was contagious Wednesday night at the Garden, and it was fine to see.

nypost.com - 2 years ago
President Biden is holding his first press conference on Thursday — more than two months into his term — as his administration reels amid a mounting border crisis. With Thursday marking the 65th day of his presidency, Biden has waited longer than any othe
Read More

Peyton Manning gets angrier and angrier during Broncos’ timeout debacle

nypost.com - 5 months ago
Manning watched helplessly as the Broncos bizarrely let time tick off the clock in the final minute of their 17-16 loss to the Seahawks on "Monday Night Football."
Read More

College basketball preview: The best local teams have to offer

nypost.com - 1 year ago
St. John's star Julian Champagnie is the best player on the best team as the college basketball season gets set to tip off on Tuesday night.
Read More
More News & Articles