Relatives of serial killer Richard Cottingham — known as both the "Torso Killer" and "Times Square Killer" — told The Post about finally confronting him this week.
Author: Joshua Rhett Miller
Published: 2022-12-08 11:03 am 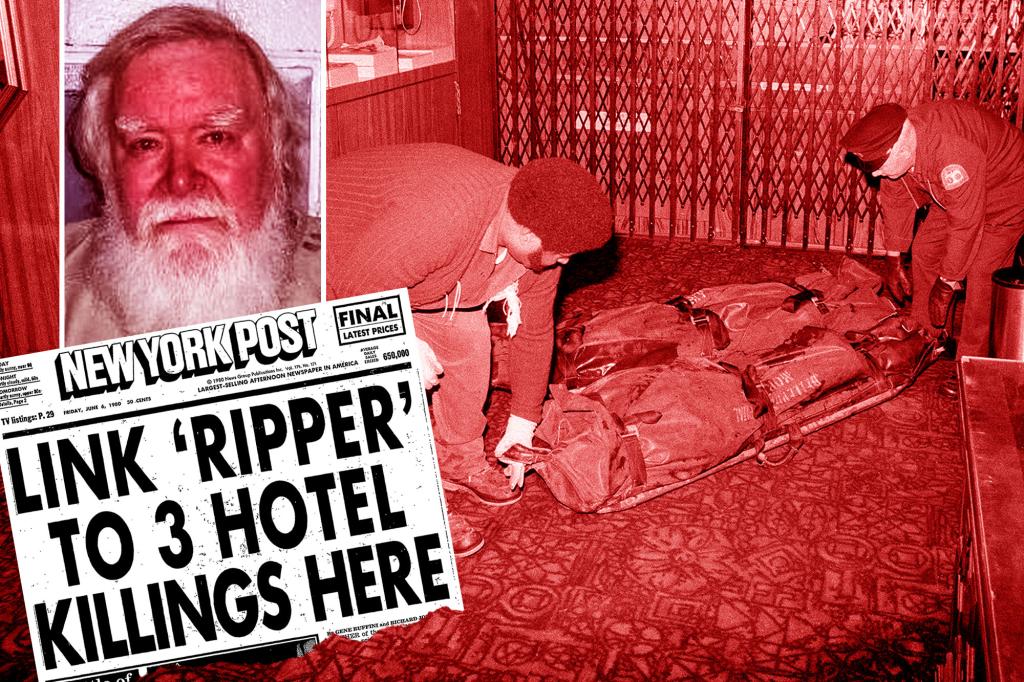 Fifty years after his mother was strangled and thrown from a Long Island bridge, John Moye finally got a glimpse of the wickedness that altered his life forever.

Moye, 55, stared down serial murderer and rapist Richard Cottingham in a Nassau County courtroom Monday as the 76-year-old notorious “Torso Killer” admitted to five more sadistic slayings decades earlier, bringing his known tally to 17 — although experts believe that figure could be as high as 100 victims.

“Everything that I was taught about evil was evident in his presence, in his demeanor, in the gaze of his eyes,” Moye told The Post. “It was pure evil. I could feel it.”

The body of Laverne Moye, of St. Albans, Queens, was discovered in a Rockville Centre creek on July 20, 1972. Cottingham, a depraved killer already serving more than 200 years in prison, confessed to tossing the 22-year-old mother of two from a bridge — ending her family’s half-century quest for answers.

“It represented closure,” Moye said of this week’s hearing. “It represented the opportunity to let the entire world know that Laverne Moye was a human being. She was a mother, she was a wife, a daughter and a grandmother taken far too early. But her light shines brightly against the backdrop of evil.”

Monday marked the first time Moye ever laid eyes on Cottingham, who dismembered some of victims, including two women whose bodies were found without their heads and hands in a Times Square motel in December 1979.

“I was shocked that it was a serial killer,” Moye said of his mother’s confessed murderer. “I didn’t know what to expect. It was just shock all the way around.”

Moye, who traveled from Georgia to see Cottingham confess to killing his mother and four other women as part of a plea deal, said he leaned heavily on his Catholic faith as the unrepentant killer watched via video feed from South Woods State Prison in New Jersey, where he’s serving multiple life sentences. Hearing prosecutors detail grisly crime scenes like where Laverne was found was especially difficult to endure, her son said.

“I was shocked that one human being was capable of all this carnage,” Moye said of Cottingham. “And he sat there with literally no remorse. He didn’t have the decency or the dignity to ask for forgiveness or to even address the victims’ families. He was a coward.”

Cottingham, a divorced father of three who previously lived in Lodi, NJ, also pleaded guilty to the February 1968 rape and murder of Diane Cusick, 23, a dance instructor from New Hyde Park, NY.

Cottingham was indicted in Cusick’s killing in June after DNA evidence linked him to the cold-case slaying — believed to be the oldest match to ever lead to a prosecution, Nassau County prosecutors said. A judge sentenced him to 25 years to life after Cusick’s brother and only child read emotional impact statements in court.

Cusick’s daughter, Darlene Altman, told Nassau County Judge Caryn Fink her late grandparents raised her after her mother’s shocking slaying. They were never able to fully recover from the monumental loss, she said.

“It’s not something you can ever get over,” Altman, 58, told The Post. “I couldn’t even imagine losing a child. That’s not the natural order it’s supposed to go in.”

Altman, who was just 3 years old at the time, said her parents had separated prior to Cusick’s killing. She then grew up without a father because her grandparents did not like him, she said.

“I lost so much more than just my mother that day,” Altman said. “It doesn’t bring my mother back, but at least I have answers now. Justice was served and that’s the end of it — case closed. Now I just have to go on with my life.”

Cusick, an instructor at a dance school in the Oceanside community of Long Island, went to Green Acres Mall in Valley Stream to buy a pair of shoes. Hours later, her parents drove to the mall and found Diane’s Plymouth Valiant in the parking lot, where her body was discovered in the backseat. She had been tied up and strangled, authorities said.

Much like John Moye, Altman, who now lives in Ocala, Fla., said she struggled to process Cottingham’s savagery.

“The man has no heart, no soul, no emotion whatsoever,” she said. “It’s hard to understand how someone could be like that. It’s mind-boggling and very scary, especially to know there’s more of them out there.”

Cottingham, a former computer programmer whose wrath of terror spanned from 1967 to 1980, also copped on Monday to strangling Mary Beth Heinz, 21, in May 1972, three months before he killed Moye and dumped her body in the same creek.

The confessed killer then fatally bludgeoned Sheila Heiman, a 33-year-old mother of three, in July 1973, at her North Woodmere, NY, home, where her husband found her upon returning from shopping, authorities said.

Cottingham, whose attorney did not return messages seeking comment, has claimed to have killed as many as 100 women. Canadian author Peter Vronsky is now writing his second book on the horrifying killing spree that culminated in May 1980 at a New Jersey motel, where cops arrested Cottingham after he handcuffed, stabbed and bit an 18-year-old woman. A maid heard the teenager’s guttural screams and called police.

“I believe he’s killed between 85 and 100, as he claims,” Vronsky told The Post. “Absolutely, it’s completely plausible. And considering the closure of yesterday’s cases, I absolutely believe him.”

Vronsky, who frequently visits Cottingham in prison, said he had a freak, random elevator encounter with the serial killer on the early morning of Dec. 2, 1979, as he tried to check into the Travel Inn Motel near a seedy and sex-crazed Times Square.

Cottingham had just raped, tortured and beheaded two sex workers in a room at the motel before setting it on fire. On the way out, he bumped the author on the shins with a bag that felt like it contained bowling balls, Vronsky said.

Six months later, Vronsky would learn that the man he encountered on the elevator was Cottingham as the killer’s face appeared in newspapers across the region. He had been dubbed the “Times Square Torso Ripper” — setting off Vronsky’s lifelong fascination of serial killers.

In 2004, Vronsky published his first book on homicidal maniacs, “Serial Killers: The Method and Madness of Monsters,” an exhaustive look at executioners’ slayings dating back to ancient Rome. He later detailed his brief 1979 encounter with Cottingham in “Times Square Torso Ripper: Sex and Murder on The Deuce.” His upcoming book on the vicious predator will be released next fall.

Vronsky, who aided investigators in obtaining June’s indictment, is trying to coax as many confessions out of the aging, 300-pound serial killer as possible, but the clock is ticking since he suffers from diabetes and kidney disease, he said.

“He would describe to me certain routes he would drive,” Vronsky said of Cottinghamm relaying his murderous spree in letters and interviews over the span of five years. “So he would remember something on the way: a racetrack or a shopping mall. In the case of Diane Cusick, it was a drive-in that no longer exists there … He remembers the victim’s characteristics, but he doesn’t remember their names.”

Vronsky, whose works also include an authoritative tome cataloging 17,000 years of pathological homicide, said Cottingham scouted his victims before transforming from a family man into a ferocious monster.

nypost.com - 10 months ago
It was a victorious Sunday for Sian Heder when “CODA” scored the win at the 2022 Oscars for Best Picture. The audience cheered loudly for the Apple film, but also signed applause to honor the movie. Lady Gaga and Liza Minnelli presented the award to Heder
Read More

nypost.com - 2 years ago
Some consider Julius Randle a Knicks savior. But before he could key this season’s unexpected turnaround, he needed a few saviors of his own. That’s where Leon Rose and William “World Wide Wes” Wesley, now the Knicks’ president and executive vice
Read More

nypost.com - 1 year ago
One of the mysteries of Sunday’s game was why WR Denzel Mims only played three snaps.
Read More
More News & Articles