Stocks rise on Wall Street, but remain lower for the week 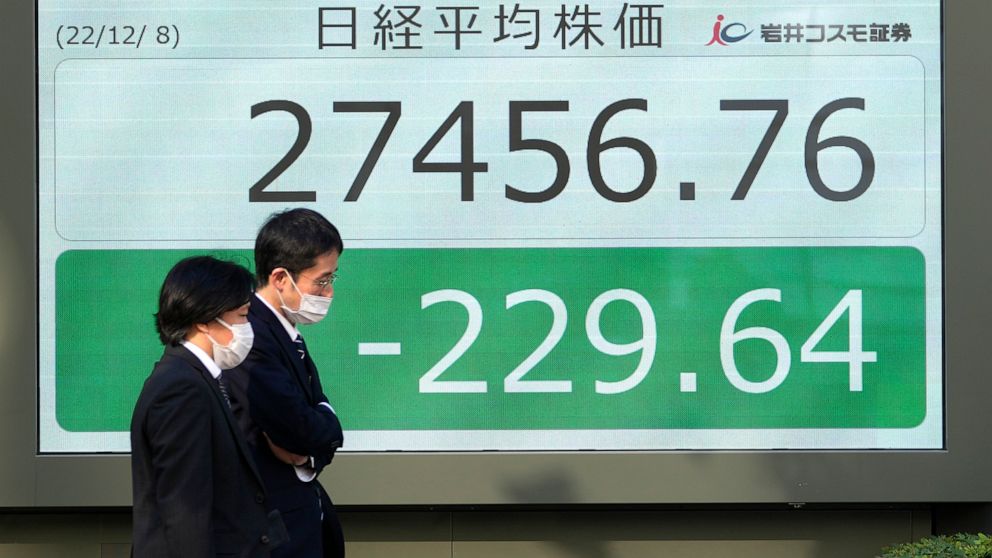 Stocks rose on Wall Street, but remain lower for the week after five straight losses

Technology and health care companies had some of the biggest gains. Apple rose 1.3% and Pfizer rose 1.6%.

U.S. crude oil prices edged 0.7% higher after bouncing around earlier in the day. They hit their lowest point of the year a day earlier.

Bond yields rose. The yield on the 10-year Treasury note, which helps set mortgage rates, rose to 3.47% from 3.42% late Wednesday.

Markets in Europe were mostly lower and markets in Asia were mixed.

The U.S. reported slightly more Americans filed for jobless claims last week, but not as many as economists had forecast. The labor market remains one of the strongest pockets of the economy, which has been stifled under the weight of stubbornly hot inflation and rising interest rates.

Low unemployment is good for the broader economy but makes it more difficult for the Federal Reserve to tame inflation. The central bank has been raising interest rates to curb borrowing and spending in order to cool the hottest inflation in decades. Its benchmark interest rate sits at 3.75% to 4%, the highest in 15 years.

The Fed will meet next week and is expected to raise its benchmark interest rate by a half-percentage point.

Resilient consumer spending, which is partly tied to strong employment, has also made the fight against inflation more difficult. It has been keeping the economy strong enough to stay out of a recession, analysts have said, but it is also increasing the chances that the Fed will go too far in raising interest rates. The Fed could potentially cause a recession by hitting the brakes too hard on the economy.

Wall Street will get more insight into how consumers feel about inflation and the economy on Friday when the University of Michigan releases its consumer sentiment survey for December. Investors will also get an update on how inflation is impacting businesses when the government releases its latest monthly report on wholesale prices Friday.

Elaine Kurtenbach and Matt Ott contributed to this report.

Drug gang behind attack that killed feminist in north Mexico

abcnews.go.com - 1 year ago
A shooting attack outside a city hall killed a feminist activist and a bodyguard
Read More

EXPLAINER: Why Yemen's war has spilled into the Emirates

abcnews.go.com - 1 year ago
Twice in the past week, Yemen’s Houthi rebels have launched attacks with missiles and drones on the United Arab Emirates, a major escalation for one of the world’s most protracted conflicts
Read More