Saquon Barkley’s mother has helped him through rough times 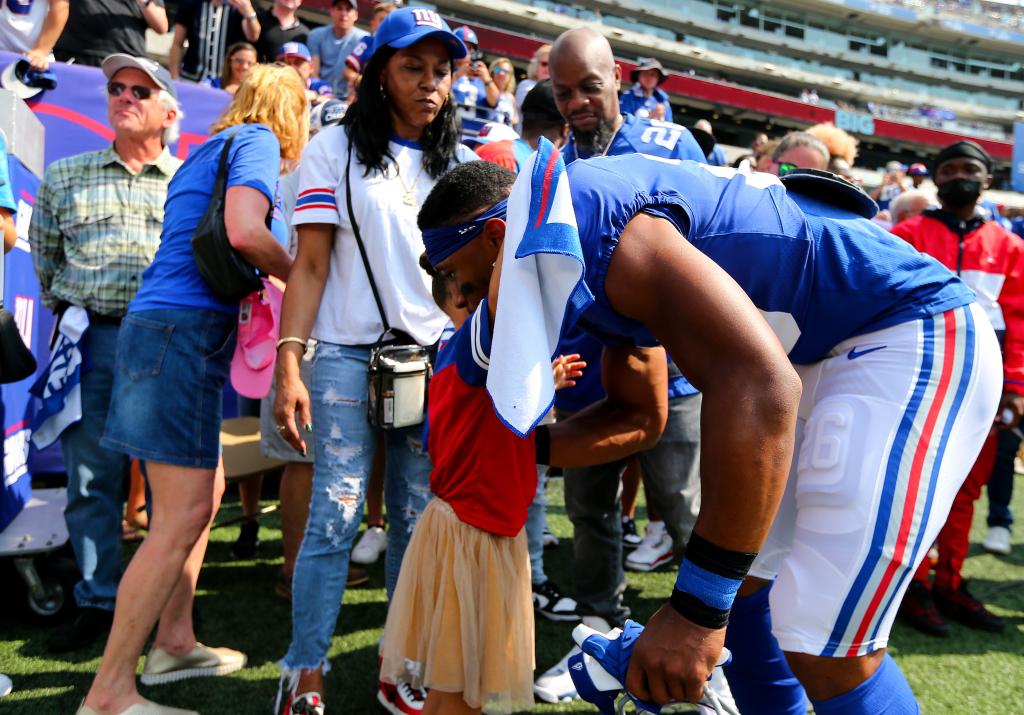 Tonya Johnson didn’t need her wildest imagination to envision this kind of comeback season from her son, Saquon Barkley.

“I believe everybody and anybody can come back from something,” Tonya told The Post. “It wasn’t life-threatening. You have some people who have stuff that’s life-threatening — ‘OK you have six to seven months to live,’ or ‘you’re gonna live.’ And sometimes even people who’ll be given that type of diagnosis, sometimes they surpass what the doctors told them.

“So my motto is: All things are possible.”

She will be there Sunday at MetLife Stadium when the Bronx-born Barkley, who was limited with a neck injury at practice, will be itching to challenge the 11-1 Eagles and stalk the first playoff berth of his five-year career, and stalk a second running back contract that could enable him to fulfill his Giant-for-life dream.

“We’re New Yorkers,” Tonya said. “Born and raised in New York, so that would be a blessing. Wherever it is — if he’s in New York, if he’s not — we support him. But New York would be ideal. It would be perfect for him to be a New York Giant for the rest of his life.”

Dream goal for a dream son.

“I’ve been there from the beginning to now,” Tonya said, “and just to see his consistency and determination to get back on that field and all the hard work that he put in trying to get his body right as well as his mind right, ’cause once your mind is right then your body will focus along with it … tremendously proud of him.”

She won’t soon forget Week 2 of the 2020 season watching on TV when her son tore his ACL in Chicago.

“Devastating for me because I was not there,” she recalled. “Normally we go to the away games, but I wasn’t at that game, so seeing it on TV, and not being able to actually physically be there to comfort him, it was devastating.”

She recalls the way his voice sounded when they spoke that fateful day.

“He shed a tear and he’s like, ‘Ma, I don’t know what this is. But it’s not good,’ ” Tonya said. “You can hear it their voice. I’m not saying he physically shed a tear, but I heard that crackle in his voice.”

This is what she told him: “I told him everything will be all right. No matter what, you can always get back up. Never forget that.”

She went to his home the next day and told him: “This is just one stop in the road.”

She will hug her son before each home game.

“I tell him, ‘You know what you’re capable of mind, body and soul-wise, you go out there on that field, do you, be safe, play hard. Love you,’ ” Tonya said.

And before road games she will text: “We will be watching, we will be rooting, play safe, play smart, play hard, love you. Give them the fear of God.”

She remembers when Saquon considered quitting football at 11 or 12 because of politics. All these years later, he is a driven father of two.

“He has his children, so he knows that he has to keep going forward for his kids,” Tonya said. “Like his father told him when he was younger and he wanted to quit football, he said, ‘If you quit one thing in life, you’re gonna quit everything.’ ”

Barkley is the Giants’ nominee for the Walter Payton Man of the Year award largely for his work with Covenant House, an organization for homeless adolescents and young adults.

“He brings these kids to each game, they come with a chaperone, they go on the field, they get to see him before the game and then after the game,” Tonya said. “The individual has their own story to tell. That just touches his heart as well as mine ’cause I’m there. It keeps motivating him more.”

Saquon was homeless for about eight months in elementary school.

“We couldn’t get into the shelter system,” Tonya said. “It was like mother and children, but the fathers weren’t allowed to go. Saquon and his sister went with a friend of mine in Bethlehem [Pa.].”

Saquon’s other charity is Children of Promise for adolescents and young teens who have a parent or parents serving a life sentence.

So many reasons for a mother to be proud of her son.

“I’m proud of him because of him staying true to himself,” Tonya said, “and continued to do something that he loved. He took a sport he watched on TV with his dad and he made it his dream. And he made his dream a reality.”

These are the first meaningful December games of Barkley’s career, and no one deserves them more. He is thrilled that Aaron Judge achieved his goal to stay in New York, where he yearns to discover firsthand for the first time why there is no better place to win.

“I don’t know Aaron personally, but anytime you see an athlete who put a lot of hard work in, bet on himself, and get the contract that he deserves or the contract that he wants, it’s truly a blessing,” Barkley told The Post, “no matter if it’s football, basketball, baseball, hockey. At the end of the day, we don’t play the same sport, but we all put our body through hell and back, spend a lot of time away from our families, my loved ones, to work on our craft. It’s not all about the money, but that’s part of it. That’s a goal that he wanted. He accomplished it.”

Tonya Johnson’s son, the face of the franchise, deserves to accomplish his.

nypost.com - 2 years ago
Lou Lamoriello has spent all 33 of his years as an NHL general manager preaching team success over individual success.
Read More