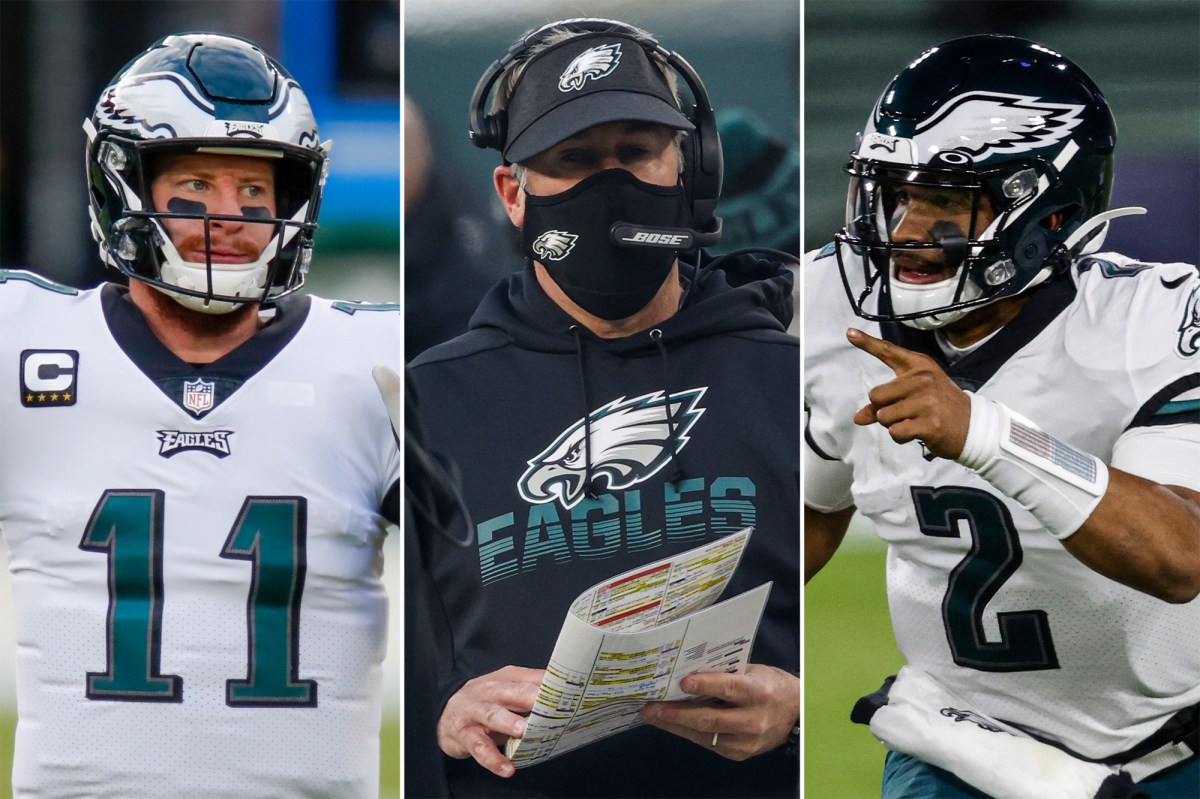 Pederson remained noncommittal Monday morning, however, over which of the two will start the Eagles’ Week 14 game against the New Orleans Saints after his skidding team’s fourth straight defeat. He told WIP radio he still hasn’t decided.

“I’ve got to get through the tape…Let me get through this game,” Pederson initially said Sunday after the Eagles fell to 3-8-1. “There’s a lot of things I’m going to consider and evaluate before anything is decided.”

The 27-year-old Wentz sports the lowest passer rating of his five-year career (72.8) with a league-leading 15 interceptions after completing just six of 15 pass attempts for 79 yards against the Packers.

“I’m not the type to worry and look over my shoulder or any of those things,” Wentz said. “I think at the end of the day, I can play better. We can as a team, and as an offense especially, play better…The scrutiny, the challenges, the adversity, all of it, I’ve got to handle it all — the good, bad and the ugly.”

Hurts outplayed Wentz after replacing him, finishing 5-for-12 for 109 yards with his first career touchdown pass. The former Alabama and Oklahoma quarterback also ran the ball five times for 29 yards.

Wentz was signed to a four-year, $128 million contract extension in 2019, making it a surprise that the Eagles selected Hurts – the Heisman Trophy runner-up to Joe Burrow last season — with their second-round pick (53rd overall) in this year’s draft.

“Any experience and any opportunity to touch the field, it only kind of raises the value of that player. It’s kind of has been that way all year, and (Sunday) Coach gave me that opportunity,” said Hurts, who only had played 33 snaps in a gadget-play role over the Eagles’ first 11 games. “With all my heart, I had every intention of coming in and getting it done and winning the game, but we came up short, and that only lights a fire in everybody moving forward.”

nypost.com - 5 months ago
Officers who fought back rioters at the US Capitol were doused in bear mace and attacked with pitchforks as they battled “tooth and nail” for their lives during the violent uprising. Officer Daniel Hodges, who was captured in the now-viral video being
Read More

nypost.com - 8 months ago
Sam Elliott, the actor known for his roles in “A Star is Born,” “Road House” and “The Big Lebowski,” narrated in his distinctive cowboy drawl a patriotic ad for Democratic presidential nominee Joe Biden that ran Tuesday during the first game of the World
Read More