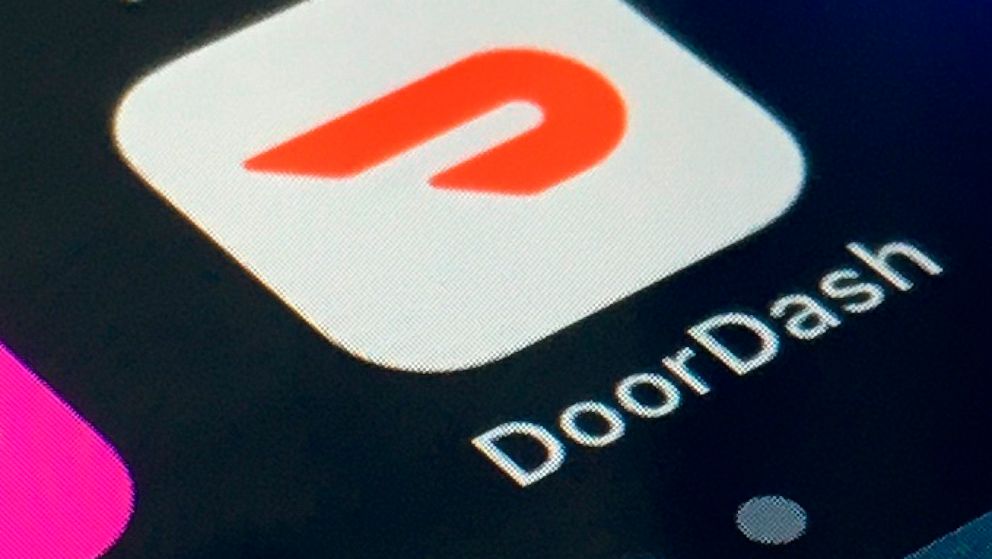 DoorDash shares soared in its initial public offering Wednesday, capping a year of explosive growth for the food delivery company.

What's not yet clear is whether DoorDash can keep the momentum going even if delivery demand eases in a post-pandemic world.

The San Francisco-based company raised $3.4 billion in the offering. Shares jumped 78% to open at $182 after DoorDash priced them at $102 each late Tuesday. The opening price valued the company, which is trading under the symbol DASH, at around $58 billion.

DoorDash was born in 2013, when CEO Tony Xu and some classmates at Stanford University set up a website and posted local menus. After a few hours, they got their first order: pad thai with prawns and a side of spring rolls.

Customers have placed more than 900 million orders since then. DoorDash now offers delivery from 390,000 merchants in the U.S., Canada and Australia. Powering that service are 1 million delivery drivers, who are independent and not considered DoorDash employees.

DoorDash was already growing before the pandemic thanks to customers’ growing preference for dining at home. Between 2018 and 2019, its revenue more than tripled to $885 million.

But lockdown orders and the closure of indoor dining have made DoorDash indispensable for many restaurants and diners this year. DoorDash reported revenue of $1.9 billion in the first nine months of 2020 alone.

The company's growth hasn’t come without headaches. DoorDash has lost money in every year since its founding, citing the cost of developing its platform and expanding into new markets. Last year, it spent $410 million to acquire Caviar, an upscale rival.

DoorDash had a net loss of $667 million in 2019 and lost $149 million in the first nine months of 2020. The company did turn a profit of $23 million in the second quarter this year, but followed that with a $43 million loss in the third quarter.

Before the pandemic, 63% of U.S. restaurant traffic — including visits to fast food outlets and food trucks — was picking up food to eat elsewhere. In the second and third quarters of this year, that had jumped to 90%, and it may stay elevated even when the pandemic ends, according to Hudson Riehle, a senior vice president with the National Restaurant Assocation.

DoorDash now controls 50% of the U.S. food delivery market. Its chief rival, Uber Eats, controls 26%, while GrubHub holds 16%. That’s a change from 2018, when GrubHub was the market leader with 39% share and DoorDash held 17%.

DoorDash pulled ahead by concentrating on suburbs and smaller cities while its rivals stayed mainly in big cities, said Mark Shmulik, an analyst with Bernstein. Skeptics thought the economics of food delivery would fall apart in less dense areas, because there was lower demand. But suburban families put in larger orders and drivers encountered more predictable traffic and parking so they could deliver more efficiently, Shmulik said.

Davidson analyst Tom White, who has a “buy” rating on DoorDash’s stock, said the company’s strong market share gains and future possibilities, including grocery and retail delivery, outweigh the risk of slower growth once the pandemic subsides. White says DoorDash also has the most variety in its listings, giving it less exposure to any one restaurant chain.

Some independent restaurants have been vocal critics of the company, saying its commissions — which can approach 30% — are too high. DoorDash says it reduced commissions for the smallest restaurants during the pandemic, but the fees will likely remain an issue.

Several cities, including New York and Chicago, and the states of New Jersey and Washington have temporarily capped fees that delivery companies can charge restaurants. DoorDash says those caps force it to charge consumers more.

Some restaurants are banding together to provide their own delivery. Around 25 restaurants have signed up with DC To-Gogo, one such effort in Washington. But other restaurants have created virtual kitchens or “ghost kitchens,” succumbing fully to delivery.

Xu, who washed dishes in a Chinese restaurant when he was growing up, insists DoorDash is trying to help small businesses compete in a world where consumers want the convenience of app-based delivery.

“Helping brick-and-mortar businesses compete, succeed, and flourish in these rapidly changing times is the core problem we are trying to solve,” Xu wrote in a filing ahead of the IPO.

Rick Camac, dean of restaurant and culinary management at the Institute of Culinary Education, said restaurants and food delivery companies are still trying to figure out the economics of delivery.

“They haven’t figured out how to make money in this world, either, and yet we’re pressuring them to charge less,” he said.

DoorDash has also taken some heat from drivers. Last month, it agreed to pay $2.5 million — most of it to Washington, D.C., drivers — to settle a lawsuit alleging that it misled customers about its tipping policy. Under an old pay model, tips would be factored into drivers’ base pay.

But DoorDash won a victory in November when California voters determined that gig workers, which also includes Uber drivers, should continue to be classified as independent contractors. California lawmakers had tried to force companies to consider those workers full employees and grant them benefits like health care.

abcnews.go.com - 2 months ago
Canadian justice department lawyers say there is no evidence to support defense allegations of a “covert criminal investigation” involving the United States which could result in stopping the extradition hearing for a senior executive for China’s Huawei
Read More

abcnews.go.com - 5 months ago
Months of low rainfall have left Germany’s Rhine River short of water, forcing shippers to reduce their loads by half to avoid running aground
Read More

abcnews.go.com - 4 months ago
Germany's finance ministry says the head of the country's financial supervisory authority is to leave the job as the agency is reorganized in the aftermath of the accounting scandal at payment systems provider Wirecard
Read More
More News & Articles