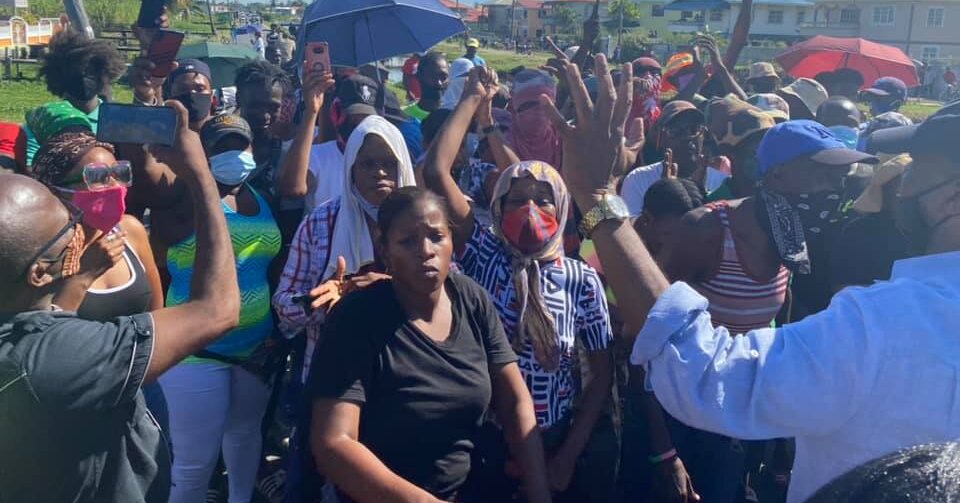 COTTON TREE, Guyana — The gruesome murders of two teenagers and the apparent reprisal killing of a third have plunged Guyana into its worst racial unrest in years, coming just weeks after the nation emerged from a disputed election that had deeply divided its two dominant groups over the country’s newfound oil wealth.

The unrest is raising fears of a return to the violence between Guyanese of Indian and African descent that split the small South American nation in the 1960s, and has unsettled it periodically since.

President Irfaan Ali, who took office in August after a monthslong standoff over the election results, said he would call on Britain and Caribbean nations to help investigate the killings to ensure impartiality.

“This is basically two countries living under the same roof,” said Ralph Ramkarran, a veteran Guyanese politician who ran unsuccessfully for Congress in March as an independent on a multi-race platform. “You don’t have people who are trusted by both sides. There’s no Mandela here.”

The discovery on Sunday of the mutilated bodies of two Black teenagers in an agricultural area populated predominantly by Indo-Guyanese had reignited racial tensions still simmering from the election. The Guyanese police quickly ruled out political motives and detained seven people, but they have not disclosed what led up to the killings.

Groups representing Afro-Guyanese immediately labeled the killings a hate crime and called on supporters to protest. Hundreds of Afro-Guyanese residents took to the streets this week in the northeastern Berbice region where the murders took place, blocking roads, burning trucks and attacking Indo-Guyanese passers-by and businesses.

“These callous murders are not seen as isolated,” the Guyana Human Rights Association said in a statement. “Both sides are quick to see them as a continuation of earlier ethnic upheavals.”

The March presidential election had taken on strong racial overtones, with the two main parties mobilizing supporters by claiming they would be excluded from oil profits if their side lost. The incumbent, David Granger, whose APNU + AFC party draws support primarily from Afro-Guyanese, narrowly lost to Mr. Ali, whose People’s Progressive Party is backed in large part by Indo-Guyanese.

The stakes in the election were high. Fueled by a string of massive oil discoveries, Guyana’s economy is expected to expand by about 50 percent this year, according to the World Bank, making it the fastest-growing economy in a world battered by the coronavirus.

Mr. Ali, South America’s first Muslim head of state, tried to defuse tensions this week by appealing for unity, pledging justice and seeking outside help. But when he tried to visit the families of the first two victims on Tuesday, an Army-escorted convoy sent ahead was turned back after being blocked and heckled by protesters.

His presidential opponent, Mr. Granger, who had reluctantly conceded to Mr. Ali last month under international pressure, has backed the protesters.

“We have to establish some self-defense in our society to protect our children, protect our women, our young people,” Mr. Granger, a former Army Brigadier, told reporters this week after visiting the families of the first two victims, Isaiah Henry, 16, and Joel Henry, 17. “Unless we protect ourselves, nobody is going to protect us.”

Guyana’s Afro- and Indo-Guyanese communities each point to a history of persecution — a legacy of slavery and forced labor in the former British sugar colony — to justify their mutual fear.

The Indo-Guyanese, who arrived as indentured laborers, dominate business and agriculture, while the descendants of enslaved Africans form the majority of the public sector and security forces. Each, when out of power, has cited mistreatment at the hands of the other.

“Racism is connected to political power in Guyana,” said Deodat Persaud, a member of the government’s Ethnic Relations Committee, in a phone interview from the Berbice region.

Political violence in Guyana dates back to the country’s struggle for independence in the 1960s when, declassified C.I.A. documents show, the United States instigated a campaign of civil unrest to prevent a Marxist Indo-Guyanese leader, Cheddi Jagan, from taking power. Hundreds of Indo-Guyanese died in the violence, and tens of thousands fled the country.

Violence flared again in the early 2000s when more than 400 people, mostly Afro-Guyanese, died in street battles between criminal gangs affiliated with the main political parties and security forces.

The killings of the three teenagers are reopening those historical wounds.

The Henrys, who were cousins, had disappeared on Saturday while going to nearby fields to pick coconuts. Their bodies were found the following day with multiple lacerations, the police said. An “X” was cut into the back of Isaiah’s head and forehead, while Joel’s chest was cut open.

On Wednesday, protesters ambushed the young Indo-Guyanese man, Haresh Singh, beating him to death and setting fire to his motorbike, his family said. The police said Mr. Singh died from trauma to the head and neck, but did not offer further details.

Bordered by Venezuela to the west and Brazil to the south, Guyana has been one of South America’s poorest countries. But from today’s trickle of oil, Guyana’s output is expected to reach 1.1 million barrels by 2030, according to estimates by the consultancy Rystad Energy, and oil revenue per capita would rival that of some Gulf States.

Many of Guyana’s civic and business leaders hope that peace lies in the country’s nascent oil wealth, unleashing economic growth that will lift all boats.

Yet nine months after the start of oil production, the fruits of the oil wealth have been largely limited to a few upmarket communities and hotel developments. Located 100 miles off Guyana’s coast, the oil wells generate few local jobs and employ mostly foreign experts. Even their meals are mostly imported.

In contrast, the country’s main sources of employment — construction, agriculture and fishing — have been battered by the pandemic and the political crisis. Bank lending, an indicator of economic confidence, has barely grown this year, even as oil production shot up.

Rather than bringing the country together, some Guyanese fear that oil will stir longstanding resentments and divide it further.

“I am still in shock and hurt — it was my only source of income,” Mr. Pitam said. “I am good with everybody and we get along well.”

As the unrest spreads, the victims’ families fear the racial tensions are overshadowing their clamor for justice.

“This is not about race or religion or political things,” Gladston Henry, the father of Isaiah, told reporters. “We want justice for these youths, these little boys that had a whole life ahead of them.”

“The nation cannot be against one another,” Mr. Henry said, “because this is going on too long.”

www.nytimes.com - 1 year ago
A reminder to mind your own business and know your worth.
Read More

www.nytimes.com - 1 year ago
While America has essentially lifted all rules for those who are vaccinated, the emergence of a new variant is leading Britain and the E.U. to move with more caution.
Read More

U.S. veterans are training Ukrainians near the front lines in the fight against Russia.