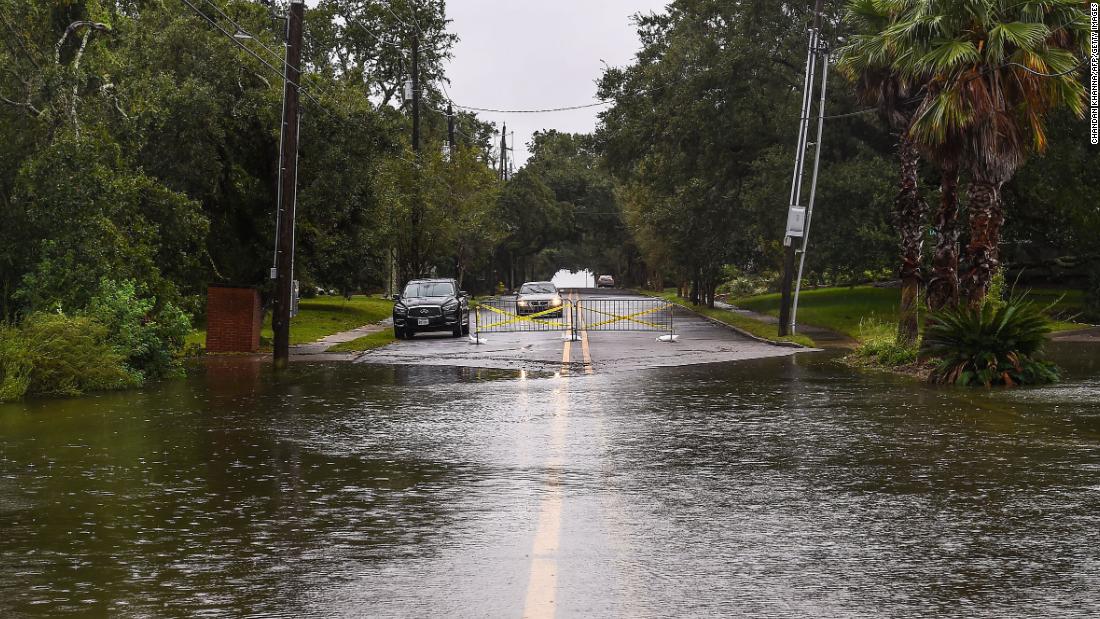 (CNN)Hurricane Sally restrengthened to a Category 2 Hurricane early Wednesday morning as it churns slowly along the Gulf Coast.

The slow-moving storm is expected to make landfall between Gulfport, Mississippi, and Pensacola, Florida late Wednesday morning if it maintains its current 2 mph crawl north. Winds of 100 mph have been recorded by an Air Force Reserve aircraft and the Mobile, Alabama, Doppler radar.

More than 150,000 people are already without power along the Gulf Coast and thousands have evacuated ahead of the storm.

The storm has already brought flooding and storm surge to several coastal communities and prompted the evacuation of thousands of people directly in its path.

Sally's maximum sustained winds strengthened to 90 mph Tuesday night, but the storm's pace is moving at a sluggish 2 mph. The slow speed is expected to continue through Wednesday as it turns to the north and then northeast, bringing with it strong winds and potentially historic flooding.

Rainfall of 10 to 20 inches is expected across Mississippi, Alabama and the Florida Panhandle, with isolated amounts of 30 inches possible.

Florida's National Guard has activated 175 members to prepare for search and rescue operations, with 30 foot high water vehicles on standby for use if needed, according to a tweet from the Division of Emergency Management.

The slow moving nature of the storm also means that hurricane force winds and storm surge will be in the area longer, particularly to the east of the storm center.

Flash flooding with rainfall amounts of 6 to 10 inches could be seen in Georgia and the Carolinas later this week as the storm moves inland and weakens.

More than 150,000 customers have lost power in Alabama, Mississippi and Florida as of early Wednesday morning, according to PowerOutage.US.

Those in the path of Sally are also experiencing water outages as conditions are unsafe to make repairs to utilities because of the storm.

Escambia County Utilities Authority issued an alert Tuesday that they are unable to respond to a significant water main break in Pensacola Beach due to storm conditions and bridge closures ahead of Sally.

The water system had to be shut off at approximately 11:00 p.m. as storm surge and tide levels will also inundate the sewer collection system, according to ECUA.

"We urge residents who are still on Pensacola Beach to store water if possible. ECUA will dispatch crews to locate the break and make repairs as soon as possible post-storm," the notice said.

Businesses are also closing because of the storm, with Walmart announcing 54 closures due to Sally, Walmart spokesman Scott Pope told CNN Tuesday.

"We are tracking the storm in real time and have activated our Emergency Operations Center in order to support our associates in the impacted areas," Pope said.

Across the Gulf Coast, three military installations have announced that only mission essential personnel should report to work Wednesday.

Mandatory evacuations have been ordered for much of the coast and low-lying areas from Mississippi to Florida. Shelters have been opened to accommodate those evacuees.

People have been preparing for Sally since the weekend, filling sandbags, grabbing supplies and prepping their homes.

Merrill Warren of Summerdale, Alabama, which sits about 16 miles inland from the Gulf, told CNN he brought in furniture, purchased gas and other supplies, and got his generator ready for the storm.

On Tuesday night he reported that heavy rains and winds of up to 39 mph had already hit inland. Warren said he's more concerned about the potential for increased rainfall and surges than anything else.

"This isn't the first Category 1 Hurricane that I have been through. I have been there through Hurricane Nate and Tropical Storm Gordon," Warren said. "I'm more worried about the rain for this one ... The rain and storms surge are definitely going to be the bigger issue with a storm moving at 2 mph."

www.cnn.com - 1 week ago
Ruth Bader Ginsburg, the second woman to serve on the US Supreme Court, died Friday, September 18, due to complications from pancreatic cancer. She was 87.
Read More

On a pandemic Earth Day, be good to the environment and to yourself

www.cnn.com - 5 months ago
This year's Earth Day -- the 50th anniversary of the birth of the modern environmental movement -- will be a quiet one.
Read More

What to ask when your child wants to use social media

www.cnn.com - 2 years ago
After months of asking, you took the plunge, and now your kid has a phone. Inevitably, soon after the smartphone comes social media (insert parental scream). For most parents, social media feels scary when they think about their kids using it. Why is it
Read More

www.cnn.com - 3 years ago
Students in New Mexico would have to apply to a college or commit to some other post-graduation plan in order to graduate from high school, under a bill working its way through the state's legislature.
Read More
More News & Articles