Nurses Are Anxious and Angry in 2nd Wave: ‘We’re Not Prepared’

“We’re worse off in some ways than we were in the beginning,” said one nurse about the lack of workers and resources at her New York hospital.
Author: Troy Closson
Published: 2020-12-17 05:00 am 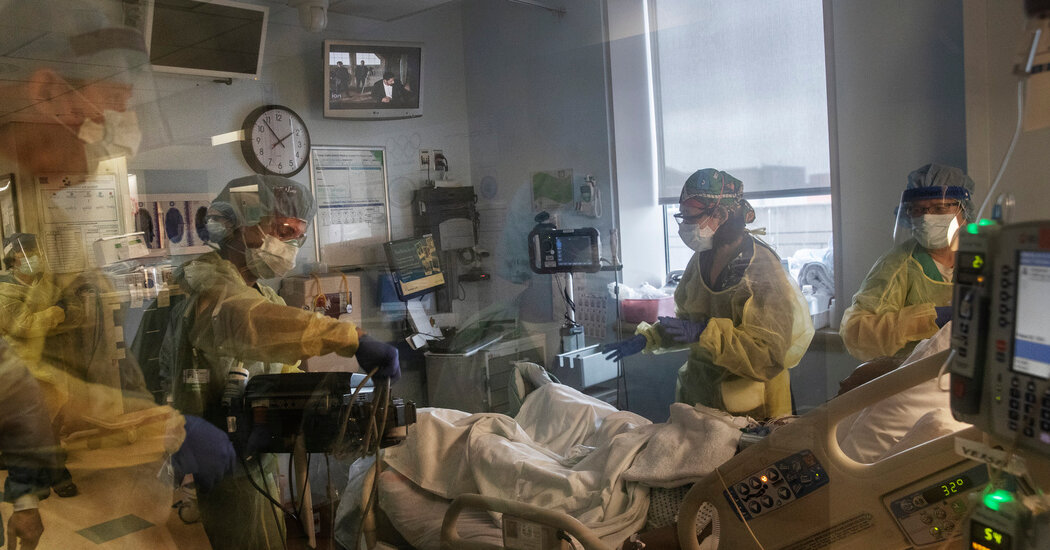 In Albany, an outbreak of the coronavirus erupted among nurses and patients in the cancer unit of a hospital.

Across the state, nurses at hospitals in the Buffalo area bought their own masks and face shields out of concern about the quality of supplies in stock.

And when an emergency room nurse in New Rochelle began her shift, she was asked to care for 15 patients, after her co-workers called out sick.

The accounts recall the early days of the pandemic, when the virus ravaged New York — but these scenes took place over the past several weeks. Nurses and other health care workers in the state have begun to warn about the conditions in hospitals, as virus patients are checking in at an alarming rate.

“We’re worse off in some ways than we were in the beginning,” said Shalon Matthews, an emergency room nurse in New Rochelle. “We need staff, we need help, we need resources. I’m fearful for my patients and I’m fearful that the same thing that happened back in March, it’s going to happen again — and once again, we’re not prepared.”

Hospitalizations in the state have recently reached levels not seen since May, when New York was the epicenter of the crisis in the U.S. On Wednesday, more than 6,000 people were hospitalized and being treated for the virus.

The improvement of virus treatments methods, leading to lower death rates, and the arrival of the vaccine this week make a repeat of the spring seem unlikely. Nurses are among a group prioritized to get some of the first doses of the vaccine.

Yet more and more nurses in the state are now worried that poor safety protocols at their hospitals and low staffing levels — partly a result of departures after low morale in the spring — could put patients at risk, and increase the physical and emotional toll on health care workers.

Reflecting the growing tension, roughly 1,000 workers walked off their jobs at health centers in New Rochelle and Albany earlier this month, echoing a growing trend around the country.

Earlier this fall, more than 400 nurses at a hospital in Connecticut went on strike over issues including a lack of personal protective equipment. Twice as many nurses took the same step weeks later in suburban Pennsylvania, citing fears around low staffing levels. The same concerns were raised last week at multiple medical facilities in California.

At Albany Medical Center in New York, Michael Fitzsimmons, a critical care nurse at the hospital for 23 years, said nurses have been upset that the hospital’s protective equipment and safety protocols feel insufficient.

Over the summer, nurses were directed to stop labeling single-use N95 masks so they could be decontaminated and reused up to 20 times, said Mr. Fitzsimmons. But he said the reprocessed masks that he and others have been given are often discolored, stained or do not fit correctly.

A firm in Putnam County that consults on industrial hygiene examined a federal complaint that a state nurses’ union filed over general procedures and found that workers were being placed at an “unreasonable risk of exposure” to the virus.

“The materials used to clean them are destructive and eventually going to affect their fit,” Edward Olmsted, who runs the firm, said of the masks. “It almost gives nurses a false sense of security.”

The C.D.C. recommends that a single N95 mask be reused up to five times, and only so when a hospital is experiencing a “crisis” level shortage of supplies, like many did in the spring.

A hospital spokesman, Matt Markham, said that Albany Medical has more than a 90-day supply of gear. He added that all masks are inspected before they are either kept in supply or destroyed, and that staff members are not forced to reuse a mask they are not comfortable using.

Late last month, at least eight patients and 14 staff members at Albany Medical tested positive for the virus after an outbreak in an oncology unit with 27 beds, according to the New York State Nurses Association.

Three nurses from the department, who spoke on the condition of anonymity out of fear of retribution, blamed the breakdown on poor safety protocols and a delayed response.

As patients began experiencing symptoms of the virus, they said, some were not isolated in single rooms away from others. And after the first positive tests, the unit stayed open for more than a day. About 10 days later, patients began re-entering the unit, though the nurses said that not all areas were properly cleaned. They say no protocols have been changed.

“I was devastated,” said one nurse, who tested positive for the virus after the outbreak. “Nurses take a code of ethics and we’re not supposed to inflict any harm, and because of the policies at the hospital, that happened.”

Mr. Markham said the outbreak occurred after a staff member worked while ill and wore a surgical mask incorrectly. He added that hospitalized patients are not always tested because of the “current community prevalence level.” The federal Occupational Safety and Health Administration has said it will investigate procedures at the hospital following the union’s complaint.

“Any accusations that we are not following the appropriate polices, procedures or approach to the safety of our staff and patients are frankly absurd,” Dr. Fred Venditti, the executive vice president for system care delivery at the hospital, said at a recent news conference.

Medical personnel and staff members in regions of New York and across the country do agree there are some ways that hospitals have better prepared themselves for the virus. Many are maintaining larger stockpiles of personal protective equipment, and patients are often diagnosed and cared for more effectively.

Still, Gov. Andrew M. Cuomo has expressed concern about the readiness of hospitals to handle a resurgence of the virus in the winter months, restructuring guidelines for determining virus-related restrictions to focus more heavily on hospital capacity. As infections and hospitalizations have begun to soar across the state, Mr. Cuomo has said potential staff shortages are now greater worries than available beds for patients.

Among health care workers, nurses face a particularly high risk of contracting the virus, according to a recent report by the C.D.C.

In the pandemic’s earliest months, some hospital systems shut down or limited the amount of patients in various nonvirus units, which allowed nurses from those departments to help fill needs elsewhere.

Many facilities also received substantial help from roughly 30,000 out-of-state nurses. But with the virus surging nationally, both Mr. Cuomo and various hospital officials in New York have said they do not expect to be able to rely on them again.

That has worried some nurses, who have already seen their workloads increase. Melissa Ricketts, an emergency room nurse at Montefiore New Rochelle, said she began a recent weekend shift with 15 patients after some of her co-workers called out sick. She rushed to handle the most pressing problems, leaving some patients with a long wait for care. “It was total mayhem,” Ms. Ricketts said.

Research shows medical facilities with lower nurse-to-patient ratios experience fewer deaths and other adverse outcomes. In recent weeks, nurses in New Rochelle have often taken on at least four patients at a time in the hospital’s intensive care unit, seven at a time in the emergency room and nine at a time on the surgical floor, said Kathy Santoiemma, a union leader who has been a nurse at the hospital for 43 years.

Many nurses at the hospital say that their patient loads have now risen higher than in the spring. Brian Conway, a spokesman for the Greater New York Hospital Association, would not comment on nurse-to-patient ratios in different units at Montefiore, but said former staff members and outside nurses would be asked to help.

Mr. Cuomo has asked hospital officials in the state to identify retired doctors and nurses to help during the second wave of the virus. In western New York, where hospitalization rates are among the highest in the state, nurses say there is already a need.

“It’s absolutely a major issue,” said Crystal Knihinicki, an intensive care unit nurse at Erie County Medical Center. “I just don’t understand how there are not enough people in all of these hospitals. How is this possible?”

Turnover among nurses, which was high even before the pandemic, has continued throughout the year.

The nurses’ union said that in New Rochelle, more than 20 nurses have left the hospital since March, and Albany Medical had more than 150 nurses leave in the first six months of the year.

Across the state and country, early retirements or moves into less intense work have grown similarly common as the virus magnifies some of the problems for nurses. In New York City and areas of the state that were particularly hard hit in the spring, many also worry about the emotional toll nurses may face.

Jessica DeStefano, who helped open up the first virus unit at Albany Medical in the spring and has been a nurse for nearly 20 years, said she might leave the profession when the pandemic ends.

“I say every day, ‘What’s my next job going to be after this is over?’” said Ms. DeStefano. “I have to get out of here. I can’t go on not having the staff we need and not having the resources we need. I can’t do this for the rest of my life.”

www.nytimes.com - 2 years ago
The camp, already a bleak emblem of Europe’s migrant policy, was locked down after a coronavirus outbreak, prompting some asylum seekers to set fires that left thousands homeless.
Read More

‘A Recipe for Hatred’: Why Boris Johnson May Finally Have Gone Too Far

www.nytimes.com - 7 months ago
Moral hypocrisy, such as lying about parties held during Britain’s lockdown, is the ultimate sin in human society, with a special power to enrage.
Read More

www.nytimes.com - 1 year ago
The action was part of a larger Customs crackdown. Officials said the operators withheld workers’ wages, kept their identity documents and subjected them to debt bondage — essentially enslaving them.
Read More

When Politics Isn’t About Principle