A report identified corroded cables as being to blame in the tragedy that took 43 lives in the northwestern city of Genoa in 2018.
Author: Gaia Pianigiani
Published: 2020-12-22 11:35 am 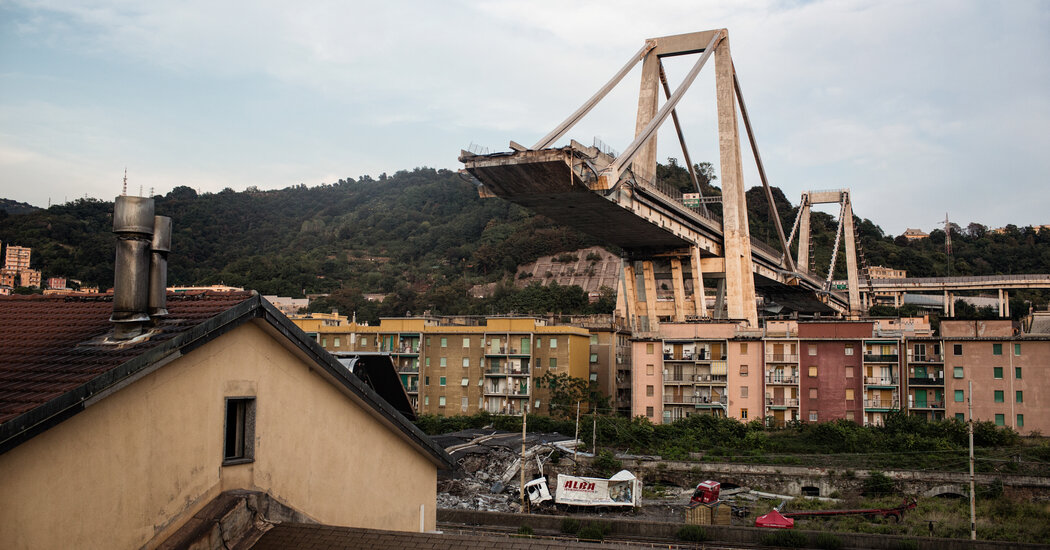 The 2018 collapse of a bridge in northwestern Italy that killed 43 people was a result of problems in the structure’s conception, design, construction and, more recently, maintenance that led to corrosion in some steel cables that ultimately snapped, according to an independent report that was made public on Monday.

With a trial expected to start next year, the report will play a crucial role in the prosecutors’ effort to bring a wide array of figures to account for the deadly collapse of the 51-year-old Morandi Bridge, in Genoa, which was once heralded as a symbol of Italian innovation and artistry but is now seen as a warning about the degradation of the country’s aging infrastructure.

“If, in any of these phases, the proper checks were made, it was highly likely that they could have prevented the tragedy,” the report seen by The New York Times read. “The lack and/or the inadequacy of the checks are the weak link in the system.”

The sweeping, 467-page paper, which was commissioned by a judge, was a milestone in the prosecutors’ complex investigation into the cause of the tragedy, which took place on a summer morning when the cables broke, taking down the deck as dozens of vehicles were crossing.

“This is an important piece to seek the truth,” Egle Possetti, spokeswoman for a group of the victims’ families, said in a statement. “It is very sad, but it is finally a clear confirmation that all this could be avoided. Our loved ones were killed. None can go back in time, but we can keep fighting with firmness and determination for the truth to emerge.”

Officials from the bridge operator, Autostrade per l’Italia, and from its engineering branch, as well as a number of high-ranking civil servants with the Italian Infrastructure and Transport Ministry are expected to go on trial in connection with the bridge collapse.

Both the Infrastructure and Transport Ministry and Autostrade declined a request for comment on the report.

Some of the findings from the engineers and from physics experts confirmed earlier reports about the bridge collapse, but they also ruled out some of the theories that had been raised by Autostrade as potential causes of the tragedy, like the action of the wind and the fall of a heavy steel coil from a truck that was on the bridge when it collapsed.

The report’s authors established that the trigger for the collapse was the corrosion of the cables on the top of the southern stay of one of the towers, which started shortly after the bridge came into service and “progressed with no rest until the bridge collapsed,” the experts wrote.

The bridge’s operator never carried out the thorough tests on its stays that were suggested by its designer, the engineer Riccardo Morandi, in 1985, the report said.

Mr. Morandi was aware that some of the steel cables were vulnerable to corrosion and that some mistakes were made during the complicated construction of such a peculiar bridge, according to notes he made at the time, now collected in the State Archive of Rome.

The bridge featured three narrow, A-frame towers, paired with 12 stays — supports that extended from the towers and fastened to the sides of the roadway. In his notes, Mr. Morandi was also concerned about the long-term risks associated with the location of the bridge, crossing a valley in Genoa that left it exposed to the salty winds blowing off the sea and to the chemicals coming from a nearby industrial site.

The bridge was lest retrofitted in the early 1990s, when the structure was managed by a state-controlled operator.

The restoration did not include the tower where the corroded cables would touch off the collapse 20 years later, but engineers inspected it and detected problems with the concrete’s water resistance.

The engineers suggested annual maintenance, but, according to the report, the next inspection did not come until 2012, and the investments needed for a proper retrofit were still being discussed the year the bridge collapsed. By that time, the Morandi Bridge, like about half of Italy’s highways, had passed to the management of a private company, Autostrade per l’Italia.

“The operator should have had an adequate knowledge of the work as it was actually built,” the report said.

Experts argue that engineers could have seen and forecast the collapse if the proper investigation had been carried out on the tower and its faulty stays.

Last year, Autostrade overhauled its management and implemented a new inspection system as part of an agreement with the Infrastructure Ministry and with the help of international experts, and it will invest billions in maintaining the country’s highways.

A 'Blade Runner' Version of Manhattan

Biden Wants No Part of the Culture War the G.O.P. Loves

www.nytimes.com - 1 year ago
The generosity of his $1.9 trillion relief bill has the added benefit of shifting attention where he wants it.
Read More

www.nytimes.com - 9 months ago
Women who are leaders across an array of disciplines, from politics to tech to deep-sea and space exploration — and more — share their experiences, their challenges and their advice.
Read More

www.nytimes.com - 1 year ago
The attorney general offered his defense just two weeks after a separate case in which a government staff member said she was sexually assaulted in Parliament.
Read More
More News & Articles